IMAGES from Day 3 of the US Open played at Flushing Meadows on Wednesday.

World number three Stefanos Tsitsipas fired down a career-high 27 aces on the way to a 6-3, 6-4, 6-7 (4), 6-0 win over second-round opponent Adrian Mannarino on Wednesday, but another protracted bathroom break drew jeers from the US Open crowd.

Greek Tsitsipas won all of his first-serve points in the opening set and fired off 53 winners in the match to Mannarino's 26 and looked set for a straightforward win at Arthur Ashe Stadium before the Frenchman won a third-set tiebreak.

Tsitsipas then retreated to the locker room for a bathroom break of more than seven minutes, leaving Mannarino to ask for some balls to be brought out so that he could stay loose ahead of the fourth set.

Tsitsipas, who infuriated Andy Murray in the last round by taking a seven minute-plus break, was met with a chorus of boos from spectators when he returned and even as he served to start the set.

The jeers had little impact on his performance, however, as he powered through the final six games to set up a third-round tie against Spanish teenager Carlos Alvaraz.

Tsitsipas said after the match that he was completely soaked with sweat after the third set and that important for him "to feel refreshed".

The Roland-Garros runner-up said he did not realize he had exceeded his previous career high of 22 aces in a match.

"I just felt very loose on my serve. My ball toss was very consistent," said Tsitsipas.

"I didn't really think about it, that it was that many."

Sabalenka powers into US Open third round

World number two Aryna Sabalenka sent Slovenian Tamara Zidansek packing in just under an hour on Wednesday, rolling through to the third round of the US Open with a 6-3, 6-1 win.

The Belarusian broke her opponent in the first game and never ceded the momentum as Zidansek struggled with her serve, committing four double faults, and making 19 unforced errors.

Sabalenka fired off 24 winners compared to just eight from her opponent in the lopsided match, as she dominated from the baseline and made only 10 unforced errors.

It was a significant improvement from her opening match on Monday, when the Wimbledon semi-finalist beat Serbian Nina Stojanovic despite 42 unforced errors over three sets.

Sabalenka faces American Danielle Collins in the third round as she continues her bid for a maiden major title. 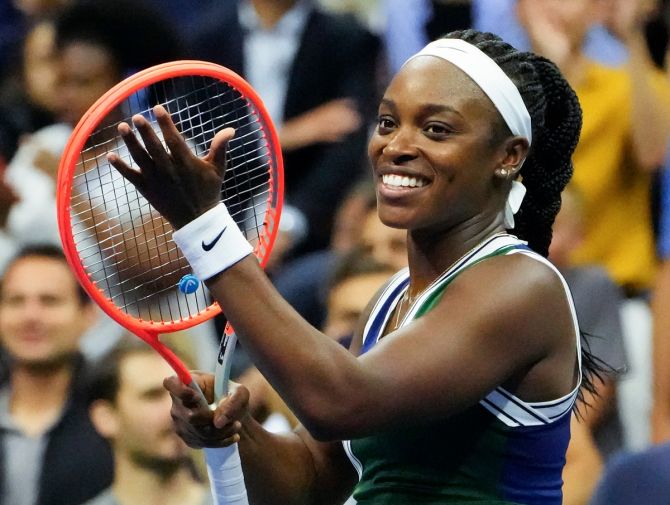 Experience trumped youth as former champion Sloane Stephens's deadly forehand sealed fellow-American Coco Gauff's fate 6-4, 6-2 in the second round of the US Open on Wednesday.

The pair appeared evenly matched early in the affair but the 17-year-old Gauff handed Stephens a critical break with a double fault on the last point in the ninth game and never regained the momentum from her 28-year-old opponent.

In the second set, Gauff failed to convert on the only break point opportunity she had against the 2017 winner, who had eight forehand winners across the one hour and six minute meeting on Arthur Ashe Stadium.

"The forehand was key today," Stephens said after the match. "I wanted to come out here and really execute and play my game."

Stephens calmly won the last seven points in a row, as she dominated from the baseline and had a two break advantage headed into the final game.

The off-court friends hugged at the net after the match and Stephens heaped praise on the 23rd-ranked Gauff, a fan-favourite at Flushing Meadows who reached the quarter-finals at Roland-Garros earlier this year, the best major performance of her career.

"I love Coco, I think everyone knows I love Coco," said Stephens. "I've seen her game really transition and change... I know there's going to be great things ahead for her." 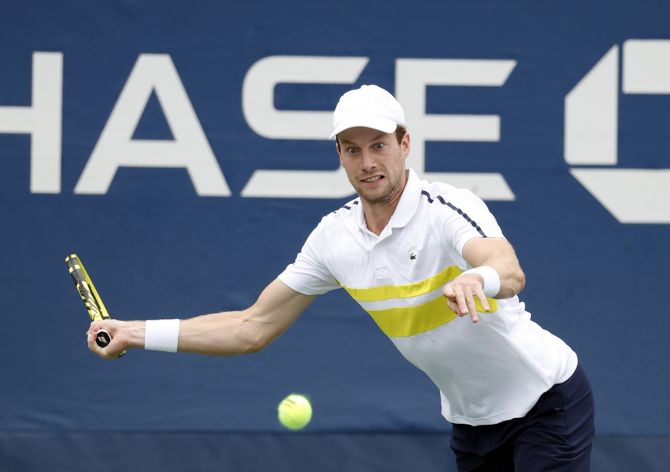 Qualifier Botic van de Zandschulp sent Norwegian eighth seed Casper Ruud packing 3-6, 6-4, 6-3, 6-4 in the second round of the US Open on Wednesday, in the biggest upset of a tournament that has so far mostly gone to script.

Ruud overcame an early break to win the first set as van de Zandschulp struggled to get his first serves in but was left without answers as the Dutchman found his form and fended off all six break point opportunities in the third.

Van de Zandschulp kept his cool on the outside court even as his racquet went flying out of his hands as he served late in the final game, waving to the Flushing Meadows crowd after clinching the affair with a backhand winner.

Ruud is the highest seeded player to exit Flushing Meadows this year, as favourites largely prevailed across Billie Jean King National Tennis Center over the first three days of the year's final major.

Also exiting the tournament was 15th seeded Bulgarian Grigor Dimitrov, who retired with an injury while trailing Australian Alexei Popyrin 7-6(4), 7-6(4), 4-0. 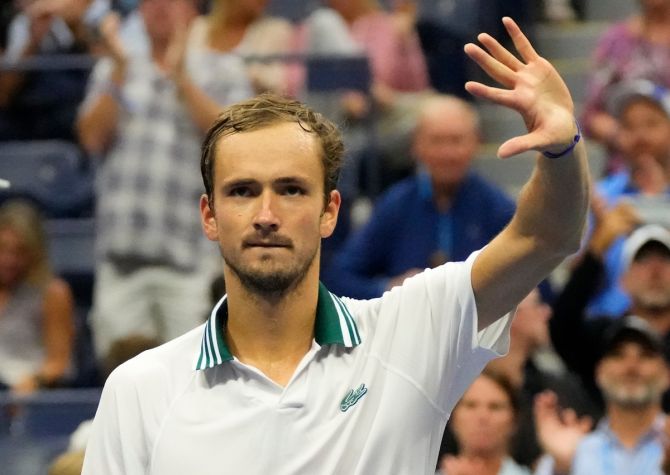 Russian Daniil Medvedev made quick work of second-round opponent Dominik Koepfer to win 6-4, 6-1, 6-2 on Wednesday, soaking up the cheers of the US Open crowd to keep alive his bid for a maiden Grand Slam title.

The world number two broke his German opponent's serve to kick off the match but Koepfer levelled with a break in the seventh game, helped by one of two Medvedev double faults in the opening set.

It was one of a rare few moments of vulnerability for the 25-year-old, who kicked into high gear in the second set, hitting 10 winners in a clinical performance with just five unforced errors.

Medvedev, who went from villain to crowd favourite as the runner-up in 2019, won all but one of his first-serve points in the third set and struck five aces past Koepfer, closing out victory in one hour and 48 minutes.

"I'm really happy to be through in less than two hours," Medvedev said. "I try to take every match as a new challenge -- the more I win throughout my career... the better I will feel."

The pair played under Arthur Ashe Stadium's retractable roof, which was closed due to inclement weather, two years after Medvedev defeated Koepfer in the fourth round at Flushing Meadows in four sets.

"It was a great match from my side. I'm really happy," said Medvedev, who lost to world number one Novak Djokovic in the Australian Open final earlier this year.

"I had to stay super consistent. I knew it from the beginning of the match, because two years ago when I played him it was a tight one."

The performance was encouraging for Cincinnati semi-finalist Medvedev, who picked up his fourth Masters 1000 title last month in Toronto. He faces Spain's Pablo Andujar in the third round.

Halep scores over Kucova to advance 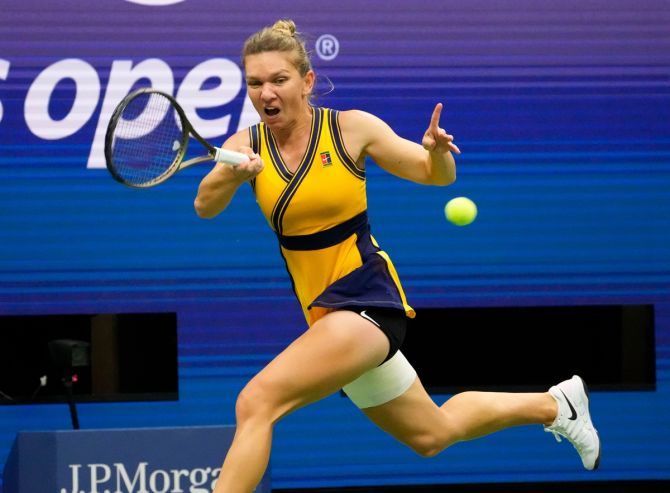 You need luck to win a US Open, says Simona Halep, and she got a bit of it on Wednesday when her second-round match with Kristina Kucova was moved from a rainy outside court to the dry of Arthur Ashe Stadium, allowing her an uninterrupted 6-3 6-1 victory.

The stop-and-start rain delays on a dreary day at Flushing Meadows provided a reflection of Halep's season that has seen the Romanian struggle through an injury-disrupted campaign.

The twice Grand Slam winner missed the French Open, Wimbledon and the Tokyo Olympics due to a calf injury then, in only her second tournament back, was forced to withdraw from the US Open tune-up event in Cincinnati due to a right thigh injury.

But there were hints on Wednesday that the former world number one's luck might be changing when her match was played under the retractable roof on Arthur Ashe Stadium, filling the hole left in the schedule when Olga Danilovic withdrew due to illness, handing defending champion Naomi Osaka a walkover.

Schwartzman sees off Anderson after weather delay to reach third round

Argentine Diego Schwartzman overcame big-serving Kevin Anderson of South Africa and multiple weather interruptions to move into the US Open third round with a 7-6 (4), 6-3, 6-4 win on Wednesday.

Play was halted at Louis Armstrong Stadium in the opening set for over 30 minutes as the venue's retractable roof was unable to prevent rain from being blown in sideways by strong winds resulting from Tropical Storm Ida.

Schwartzman then slipped during the tiebreak in the opening set, forcing another halt in play as the court was wiped down with towels.

Officials restarted the match but it was suspended shortly after and organisers later announced it would resume at Arthur Ashe Stadium following the end of the contest between Stefanos Tsitsipas and Adrian Mannarino.

When the match got back underway around midnight the Argentine quickly hit his stride and with a single break of serve in each of the second and third sets closed out the contest at around 1 a.m.

The 35-year-old Anderson, the 2017 finalist at Flushing Meadows, came into the match winning two of his previous three meetings against the 11th seeded Schwartzman.

Serve was always going to be the main weapon for the former world number five, who smashed 49 aces in Monday's opening win over Czech Jiri Vesely. He tallied another 24 against Schwartzman but was undone by unforced errors (58), tallying 37 more than his opponent.