US Open: Serena enters 3rd round; Muguruza knocked out

Images from matches played on Day 4 at the US Open at the Flushing Meadows in New York on Thursday. 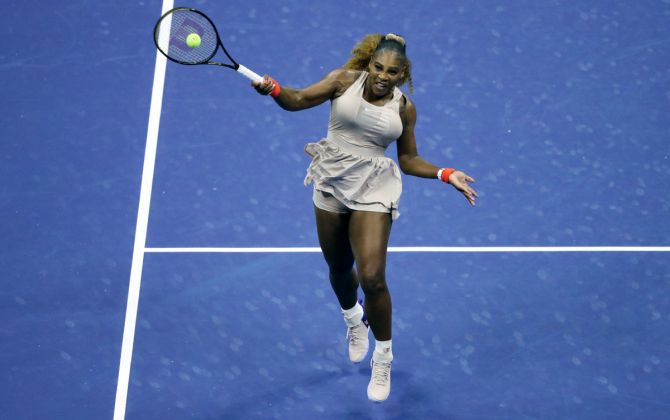 IMAGE: Serena Williams in action during her second round match against Margarita Gasparyan of Russia on Day 4 of the 2020 US Open in New York, on Thursday. Photograph: Matthew Stockman/Getty Images

Serena Williams battled her way through to a 6-2, 6-4 victory over Russia's Margarita Gasparyan in the second round of the US Open on Thursday, as she continued her bid for a record-equaling 24th Grand Slam title.

A dominant Williams sailed through the first set, closing out the first game with one of seven aces on the match, and then breaking her unseeded opponent's serve on the second game to take an early 2-0 lead.

Momentum shifted during the second set as Gasparyan cleaned up her act and the six-time champion committed four double faults. Williams clawed her way back, managing to close out a marathon 16-point game to hold her serve, psyching herself up shouting "Come on!" inside the empty stadium.

"It wasn’t that frustrating," Williams said after the match.

The second-set setback "could help me know what not to do next time.

Cilic in Round 3 for seventh straight year

For a former champion Marin Cilic has flown under the US Open radar but the Croatian with the booming serve was again making noise on Thursday, advancing to the third round with a 6-3, 1-6, 7-6(2), 7-5 win over Norbert Gombos.

With Roger Federer and Rafa Nadal not at Flushing Meadows, former winners Novak Djokovic and Andy Murray have grabbed the spotlight but Cilic, the 2014 champion, is back in the third round for the seventh straight year.

As ever, Cilic, seeded 31, has taken the long road, needing five sets to see off American Denis Kudla in the opening round and nearly three hours to get past the 104th-ranked Gombos.

The win over Kudla was the 33rd time Cilic has needed five sets to advance at a Grand Slam tournament, the most of any active player, and the 31-year-old Croatian was nearly forced to go the distance again.

Cilic looked set for a quick day as he powered through the opening set, only to drop the second 6-1.

Play tightened in the third, Gombos getting a look at set point with Cilic serving at 4-5 but in the end the Croatian took control to dominate the tiebreak 7-2.

Cilic took the momentum into the third, grabbing the only break and closing out the contest on his first match point to set up a showdown with second seed Dominic Thiem who was a 6-3 6-3 6-2 winner over India's Sumit Nagal. 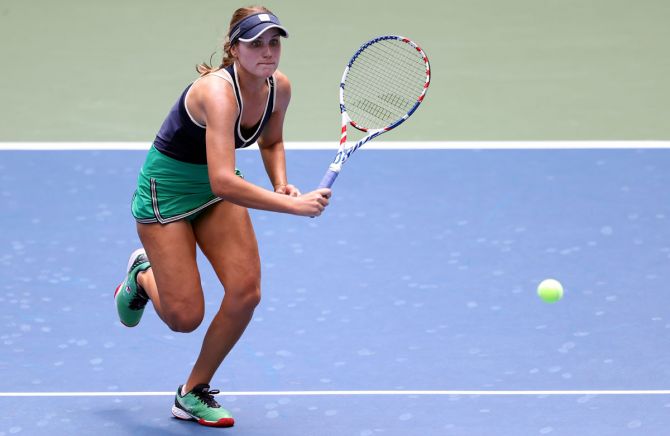 Second seed Sofia Kenin has put a lacklustre US Open tune-up behind her as the Australian Open champion showed on Thursday her game is firing on all cylinders as she marched into the third round.

Kenin, who lost in straight sets in her only warm-up event, rolled over Canadian Leylah Fernandez 6-4, 6-3 and suddenly looks every bit the player who won her maiden Grand Slam this year.

"I feel like I found a groove. I'm playing well in those two matches," said Kenin. "Obviously, I wasn't feeling great leading up to this event. I'm just trying to focus a bit more. I'm playing some really good tennis."

It was a welcome return to form for Kenin who, having backed up her Australian Open title with a win in Lyon, was having the best season of her career before the tour's five-month layoff due to the virus.

Using a mix of power and sharp angles, Kenin fired 19 winners and three aces against Fernandez, who made her main draw debut at the US Open this week and was fresh off a win over 2010 New York finalist Vera Zvonareva.

American Kenin never faced a break point during the 81-minute contest and broke Fernandez three times, including in the final game when her opponent double-faulted on match point.

Up next for Kenin, who has never been past the third round in New York, will be 27th seed Ons Jabeur, who she beat in straight sets in the Australian Open quarter-final this year to improve to 4-1 in head-to-head meetings with the Tunisian. 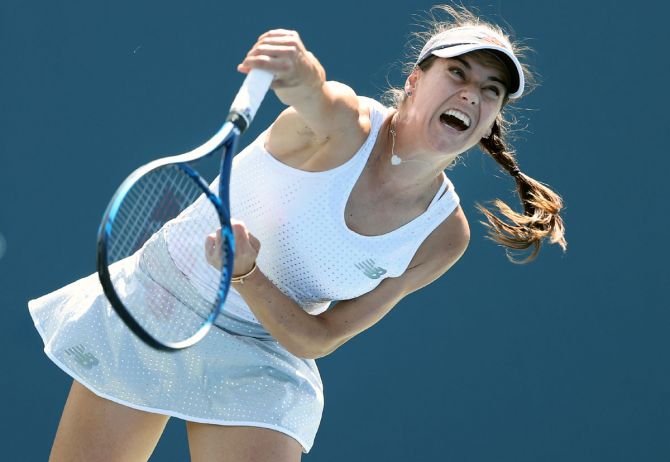 IMAGE: Sorana Cirstea held her nerve in the second set tiebreak to turn the match on its head and broke Konta's serve twice in the decider before wrapping up victory with her seventh ace. Photograph: Al Bello/Getty Images

Sorana Cirstea rallied from a set down to upset ninth-seeded Briton Johanna Konta 2-6, 7-6(5), 6-4 in the second round of the US Open on Thursday.

The unseeded Romanian sent down 37 winners and won 13 of 16 points at the net to advance to the third round at Flushing Meadows for the third time in her career.

Konta made a strong start, breaking Cirstea's serve in the opening game before running away with the first set, but paid the price for making 40 unforced errors.

Cirstea held her nerve in the second set tiebreak to turn the match on its head and broke Konta's serve twice in the decider before wrapping up victory with her seventh ace to set up a meeting with Czech 20th seed Karolina Muchova.

Medvedev marches into third round with O'Connell rout 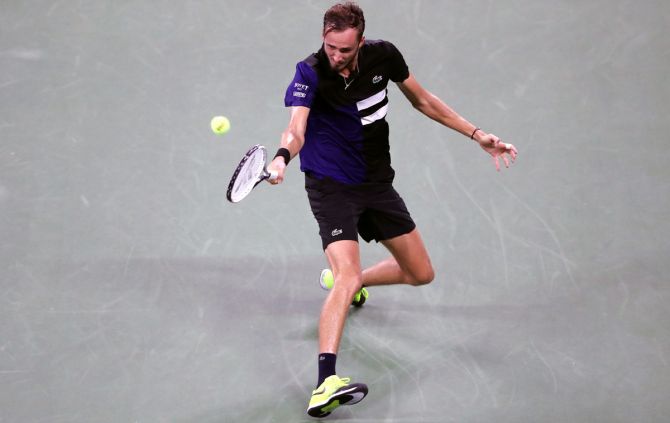 Daniil Medvedev charged into the US Open third round with a 6-3, 6-2, 6-4 demolition of Australian battler Christopher O'Connell on Thursday.

The Russian third seed, beaten by Rafael Nadal in last year's classic final, broke 116th-ranked O'Connell four times while giving him nothing on serve under a closed roof at Louis Armstrong Stadium.

O'Connell, who cleaned boats in Sydney to make ends meet while injuries hampered his tennis aspirations, took a lengthy medical time-out to have a trainer work on an apparent back strain at 4-1 in the second set.

The 26-year-old dug in admirably in the final set, prising his only two break points from the Russian, but Medvedev saved them and sealed the match with a big serve.

Medvedev next faces young American JJ Wolf for a place in the last 16. 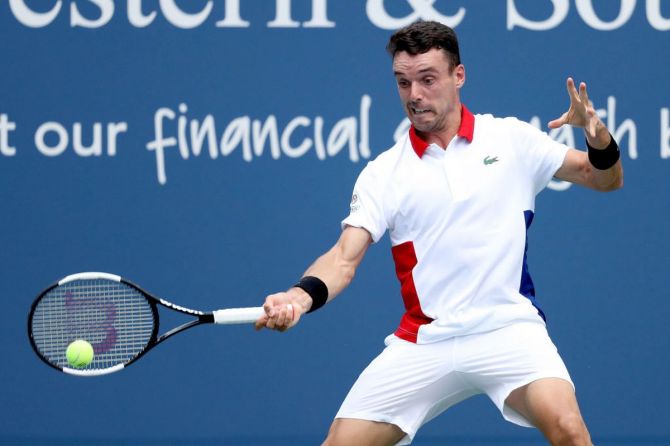 Eighth seed Roberto Bautista Agut got through a difficult second-round match against Serbian youngster Miomir Kecmanovic with a 6-3, 3-6, 6-3, 6-4 victory at the US Open on Thursday.

The Spaniard squandered 14 break point opportunities but held his nerve in crucial moments to seal victory in just over 2-1/2 hours.

Kecmanovic, making his second consecutive second-round appearance at Flushing Meadows, stepped up the pressure on Bautista Agut’s serve in the second set to force an unlikely break at 5-3 and he went on to level the match.Bautista Agut looked largely untroubled over the next two sets, however, as he patiently carved out two breaks of serve to book a place in the US Open third round for the first time in three years.

World number 11 Bautista Agut has now won five of his six matches since the tour’s resumption after the COVID-19 shutdown, reaching the semi-finals at the Western & Southern Open last week where he pushed eventual champion Novak Djokovic to a final-set tiebreak.

He will next face the winner of the all-Canadian clash between Milos Raonic and Vasek Pospisil. 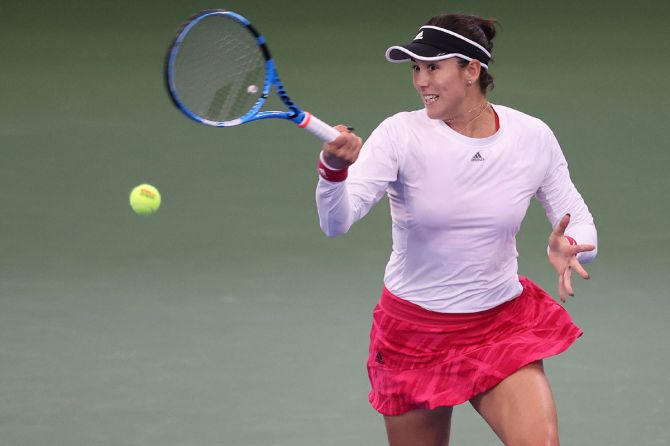 Tsvetana Pironkova, playing in her first event since 2017, claimed one of the shock upsets at the US Open on Thursday by dispatching double Grand Slam winner Garbine Muguruza 7-5, 6-3 to move into the third round at Flushing Meadows.

Keys storms into third round 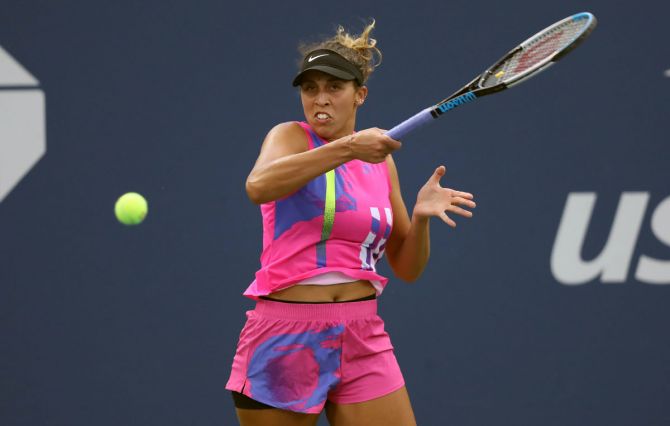 IMAGE: Madison Keys committed more than a dozen unforced errors but more than made up for it with her trademark aggressive forehand and monster serve, launching six aces. Photograph: Matthew Stockman/Getty Images

American Madison Keys once again wasted no time on court at Flushing Meadows, defeating Spain's Aliona Bolsova 6-2, 6-1 in less than an hour in the US Open second round.

Keys, runner-up in 2017 and a semi-finalist in 2018, won the first three games against her unseeded opponent, who broke her serve after a pair of unforced errors late in the first set but was unable to catch up.

Keys, who defeated Timea Babos in 55 minutes on Tuesday, committed more than a dozen unforced errors but more than made up for it with her trademark aggressive forehand and monster serve, launching six aces.

"I'm very happy with how I have been playing so far. I think I served well and I returned really well again today," Keys said. "That's been a big focus for me. I am really happy with all of that, but at the end of the day it's just another win."

Keys faces France's Alize Cornet in the third round, whom she has beaten in all three of their previous encounters. Nonetheless, the 25-year-old seventh seed said Cornet should not be underestimated.

"Alize is really good at getting a lot of balls back and just making you play that one extra shot," said Keys. "So being really patient and waiting for the right shot and not getting discouraged if she does run down an extra ball or two is always one of the biggest challenges when playing her."