Manchester United striker Dimitar Berbatov has recovered from a groin injury and will be fit for the Premier League leaders' trip to Arsenal, manager Alex Ferguson said Friday.

Ferguson is planning to make changes for Sunday's game at the Emirates and Wednesday's Champions League semi-final second leg against Schalke 04 as he gears up for a potential title decider against Chelsea next weekend.

That could pave the way for Berbatov, the Premier League's top scorer with 21 goals, to feature after often becoming a peripheral player with Mexican goal poacher Javier Hernandez preferred as a strike partner for Wayne Rooney. 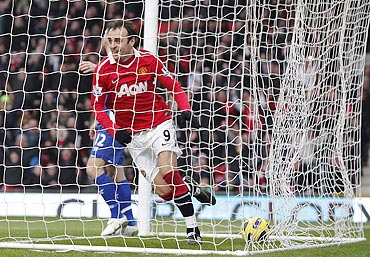 "I've got a strong squad, I can make a few changes if I want to Sunday, I can make changes Wednesday also."

United, chasing a record 19th league title, were also boosted by news that midfielder Darren Fletcher has recovered from a virus that sidelined him for two months and could return against Schalke, where his team hold a 2-0 advantage in the tie.

"I'll possibly include him in Wednesday's game, maybe get 45 minutes out of him," Ferguson said.

"He's put the weight back on, he's working hard in the gymnasium, he's a great addition to the squad at this time of year having missed a couple of months."

Six weeks ago, Sunday's match looked like it would go a long way to deciding the title as Arsenal were three points behind United with a game in hand.

Since then, a series of draws stalled the London side's campaign before last weekend's 2-1 defeat by Bolton Wanderers marked the end of any realistic challenge, while Chelsea have launched a late bid to defend their title.

But by the time Chelsea visit Old Trafford next Sunday, United could be in a position to wrap up the title under the current champions' noses.

With four matches to play, United lead the standings with 73 points, with second-placed Chelsea on 67 and Arsenal a further three points behind in third.

"I think that there is still drama ahead, the teams at the top will drop points, including Chelsea," Ferguson said. "If we get to the last game needing to win (home game against Blackpool) to win the league I'll be happy with that."

© Copyright 2021 Reuters Limited. All rights reserved. Republication or redistribution of Reuters content, including by framing or similar means, is expressly prohibited without the prior written consent of Reuters. Reuters shall not be liable for any errors or delays in the content, or for any actions taken in reliance thereon.
Related News: Chelsea, Manchester United, Alex Ferguson, Arsenal, Dimitar Berbatov
SHARE THIS STORYCOMMENT
Print this article