'I can't give you a time but we will get there. We have given ourselves a big, big uphill task to get in the top four, never mind the top six' 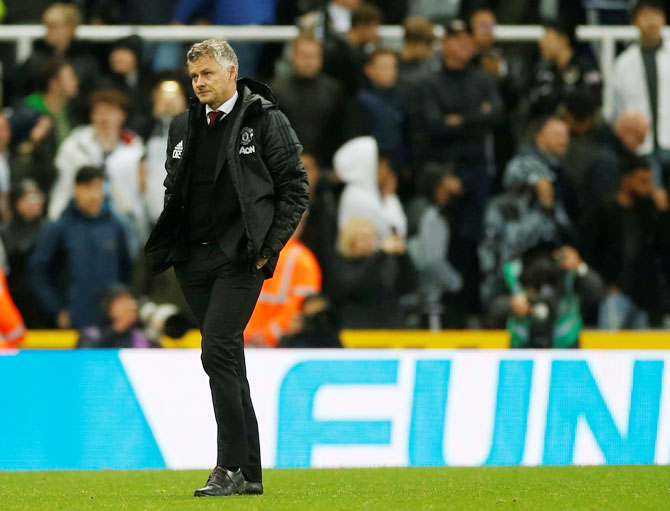 IMAGE: Manchester United manager Ole Gunnar Solskjaer said there was no quick fix for United's current malaise which stretches back to the latter stages of last season. Photograph: Lee Smith/Action Images via Reuters

Matthew Longstaff's second-half winner increased the gloom for United who will enter the international break languishing in 12th place -- 15 points behind leaders Liverpool.

Solskjaer's side had plenty of possession on Tyneside on Sunday, they were toothless with England striker Marcus Rashford barely having a sight of goal all afternoon.

While Solskjaer rightly pointed to the absentees, he said there was no quick fix for United's current malaise which stretches back to the latter stages of last season.

"It will take as long as it will take," he said when asked for a realistic time frame for the club's fortunes to revive.

"I can't give you a time but we will get there. We have given ourselves a big, big uphill task to get in the top four, never mind the top six.

"We need to get a run together and get the confidence back. If you only walk on sunny days you will never get to your destination.

"It's disappointing, but we know where we want to get to." 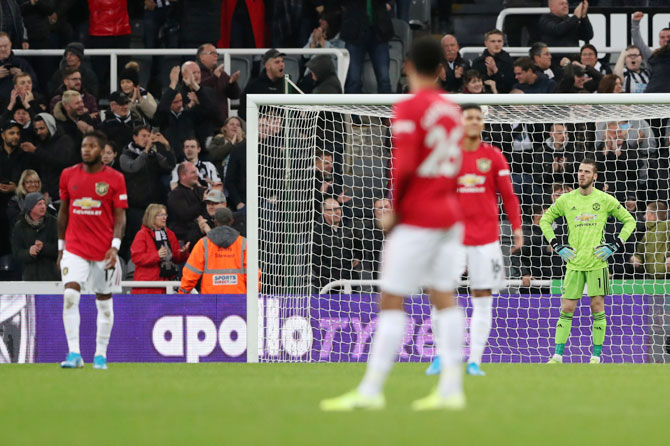 Solskjaer said he would try and "evaluate" the opening eight Premier League games, from which United have only nine points in their worst start to a league campaign since 1989-90, during the international break.

"We are disappointed, of course," the Norwegian said. "The boys worked their socks off. But we don't create enough chances to win a game of football."

Goalkeeper David de Gea said it was the worst moment for the club since he joined in 2011.

Asked what was missing, the Spaniard said: "Everything. There is lots to improve. We just try to keep trying and fighting, improving every day. It's a hard moment for us."

Former United defender Gary Neville, analysing the game for Sky Sports, said this could be a season of pain for the club.

Newcastle moved out of the bottom three and are only a point behind United. Manager Steve Bruce, a former Man Utd league winner, had never won as a manager against his old club but did so at the 23rd time of asking.

"I've waited something like 20 years for a result against Man Utd. I'm delighted for everybody," he said.

"I hope this is the turning point. I know I'm not going to be everyone's cup of tea but the nonsense that flies around is insulting. Hopefully this helps the cause."

United's next game is at home against Liverpool who have a 100% record after eight games and lead the table by eight points.

"That's a perfect game for us," Solskjaer said. "The international break is also at the perfect time because their heads need a bit of airing."