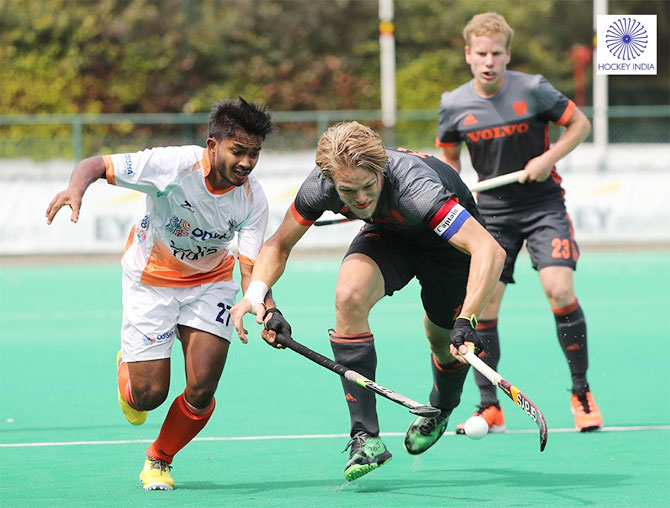 IMAGE: Action from the hockey match between India and The Netherlands at the U-23 Five Nations Tourney in Antwerp. Photograph: Kind courtesy, Hockey India/Twitter

Mandeep Mor sounded the board twice as the Indian junior men's hockey team overcame an early 0-2 setback to hold the Netherlands 2-2 in a hard-fought encounter at the U-23 Five Nations Tournament in Antwerp, Belgium.

The Netherlands caught the Indian team's defence off-guard early in the match with Marlon scoring the first goal in the first minute.

The Dutch team's early 1-0 lead put India on the back foot and recovering from this deficit was further affected when Jip Jansen scored in the 11th minute, making it 2-0 by the end of the first quarter.

But India clawed back into the game in the second quarter. While the team's defence held strong in the following minutes, the Indian attackers worked on creating scoring opportunities.

The team's first breakthrough came in the 27th minute when Mandeep Mor scored a splendid goal to narrow the difference to 1-2.

After a goalless third quarter, the Indian team pushed for goals in the final quarter and their efforts paved way for Mandeep Mor to score another goal in the 48th minute.

Though India stretched the Dutch defence as they vied for a winner, the team could not convert and were forced to settle for a draw.