IMAGE: Amit Khatri celebrates winning the silver medal in the 10km race walk at the World Athletics Under-20 Championships in Nairobi on Saturday. Photographs: Athletics Federation of India/Twitter

Amit Khatri clinched a historic silver medal in the men's 10km race walk event to clinch India's second medal at the World Athletics Under-20 Championship in Nairobi on Saturday.

The 17-year-old Khatri, the national record holder and world U-20 season leader, clocked 42 minute 17.94 seconds to finish second behind Kenya's Heristone Wanyoni (42:10.84) on the fourth and penultimate day of the championships.

This was the first time that India has won two medals in a single edition of the World Athletics U-20 Championships.

The mixed 4x400m relay team had won a bronze on the first day of competitions on Wednesday.

Khatri was leading after the 9000m mark but the local athlete Wanyoni pulled ahead with less than two laps left in the race to win gold with a personal best time. Paul McGrath of Spain won the bronze with a timing of 42:26.11 minutes.

The Rohtak lad rued that he could not produce his personal best of 40:40.97 which he had recorded while winning gold during the Federation Cup Junior National Championships in January. 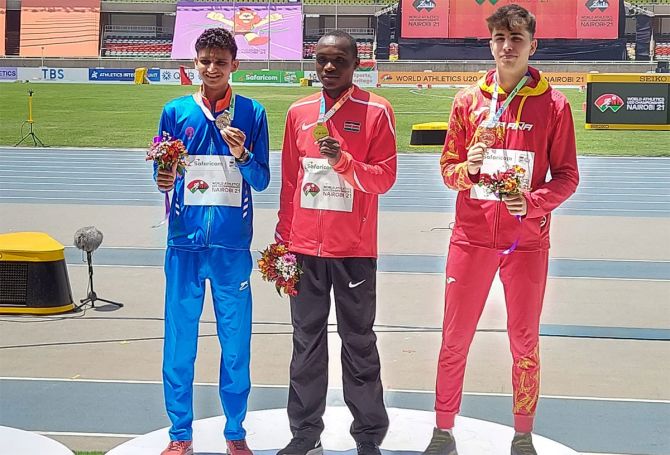 The high altitude conditions in the Kenyan capital had affected Khatri's performance as he struggled for breath during the race. Nairobi is at an altitude of around 1800m from sea level.

"It is not the result I expected but I am happy with the silver medal. Even though I came here five days before the event to acclimatise, the high altitude affected me," Khatri said after his race.

"At some point in the race, I would not breath properly but I am happy with the silver medal," he added.

It was also the youngster's first international competition.

His coach Chandan Singh said Khatri's Kenyan rival had the advantage as he knows the local high altitude conditions.

"I feel Amit could have won the gold but the high altitude conditions had affected him. The Kenyan was training in those home conditions and it was advantageous to him.

"Amit was leading for most part of the race but the Kenyan took a sudden lead around one and half laps to go. Amit could not anticipate that and could not catch up him up," Chandan told PTI from Army Sports Institute in Pune.

Chandan, who has been with Khatri since 2018, said he had put his ward for high altitude training for five months last year in Nainital and Mukteshwar in Uttarakhand after it became known that Nairobi will host the World U-20 Championships.