World Cup hosts Russia got their Nations League campaign off to a flying start with a 2-1 win away to Turkey thanks to goals from Dennis Cheryshev and Artem Dzyuba on Friday.

Turkey coach Mircea Lucescu fielded a revamped young side who initially failed to impose themselves on the visitors despite a rowdy crowd in the Black Sea province of Trabzon.

Centre-back Serdar Aziz equalised just before halftime when he unleashed a right-foot shot into the Russia net, but the visitors regained the lead shortly after the break. A defensive misunderstanding left Dzyuba one-on-one with Kirintili and the striker fired the ball past the keeper to give the Russian side a 2-1 advantage.

Despite controlling the majority of the game and making several chances late on, Turkey could not capitalise.

The Nations League, brainchild of European soccer body UEFA, aims to boost interest in internationals, which are seen by clubs and fans as disruptive to the domestic football season.

To be held every two years, it features all 55 of Europe's national teams divided into four divisions split into four groups, with games to be played between September and November.

The four group winners will be promoted to the higher division, while the bottom four teams will be relegated to the lower division.

Sweden are the other side in League B Group 2, and they will host Turkey in their opener on Monday. 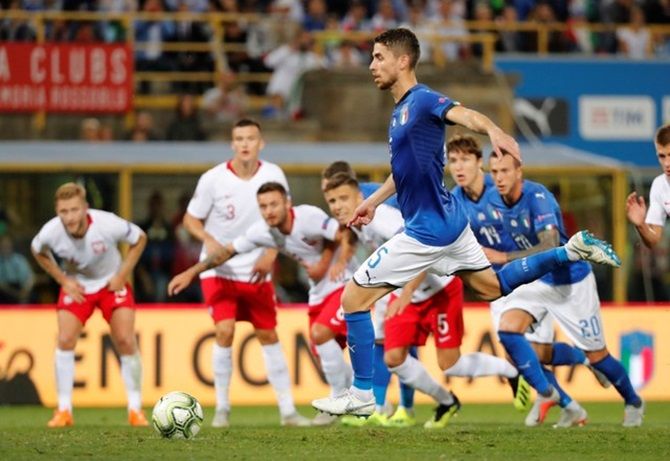 IMAGE: Jorginho steps up to take the penalty which gave Italy the equaliser against Poland. Photograph: Stefano Rellandini/Reuters

Italy needed a late penalty from midfielder Jorginho to scrape a 1-1 draw at home to Poland in the Nations League on Friday, their first competitive game under coach Roberto Mancini.

With the home crowd getting restless, Italy were rescued in the 78th minute when visiting midfielder Jakub Blaszczykowski fouled Federico Chiesa in the penalty area.

Brazilian-born Jorginho calmly converted to ensure the points were shared in the League A Group Three game.

Italy travel to European champions Portugal in their next match in UEFA's new competition on Monday.

"It was the first big game so there were some mistakes but overall the lads did well," said Mancini.

He gave Fiorentina left back Cristiano Biraghi his debut in Italy's first competitive match since the infamous 0-0 draw against Sweden in November which caused them to miss the World Cup for the first time in 60 years.

Italy captain Giorgio Chiellini quickly made his mark on Poland striker Robert Lewandowski with a late tackle which earned him a booking in the eighth minute but it failed to deter the Poles who looked dangerous on the counter.

Italy goalkeeper Gianluigi Donnarumma made two outstanding point-blank saves to foil Zielinksi in the first half hour but was powerless to stop another effort from the Napoli player in the 40th minute.

Jorginho was caught in possession, the ball was quickly fed to Lewandowski on the left and he floated a delightful cross to the far post where the unmarked Zielinski volleyed home.

Federico Bernardeschi, who had Italy's best first-half chance when he shot wide from the edge of the area, missed from a similar position after the break.

Mario Balotelli, whose only contribution was a first-half shot which sailed high and wide, was replaced by Andrea Belotti, although Mancini noted the forward was short of match practice.

"He's a striker of international level, he just needs to play," he said.

Italy then looked more dangerous and needed a penalty to salvage a point but there were encouraging signs for Mancini.

"They are all lads who can do well in the future as they showed in the second half," he added.

© Copyright 2020 Reuters Limited. All rights reserved. Republication or redistribution of Reuters content, including by framing or similar means, is expressly prohibited without the prior written consent of Reuters. Reuters shall not be liable for any errors or delays in the content, or for any actions taken in reliance thereon.
Related News: Roberto Mancini, UEFA, Italy, Artem Dzyuba, Jorginho
SHARE THIS STORYCOMMENT
Print this article 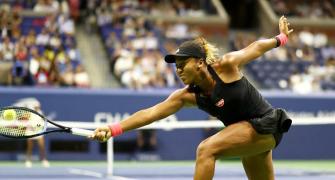 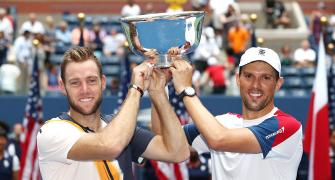 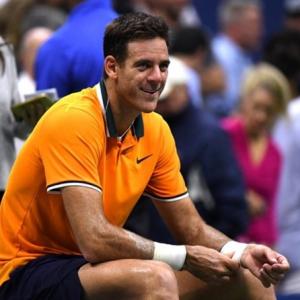 After nearly quitting, 'everything is almost perfect' for Del Potro