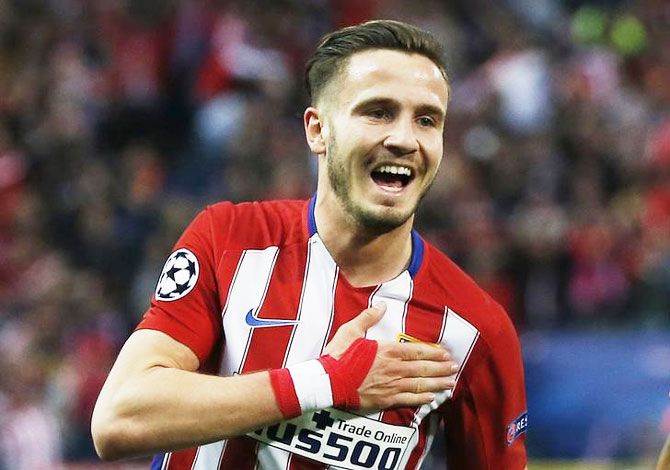 Saul Niguez announced himself as one of Europe's most promising midfielders by scoring a stunning individual goal to edge Atletico Madrid a step closer to their second Champions League final in three years.

- Champions League PIX: It's all Saul as Atletico go one up over Bayern

The 21-year-old snaked his way past Bayern Munich’s Thiago Alcantara and then skipped away from Xabi Alonso and Juan Bernat before taking on David Alaba and producing a delightful curled finish which sealed a 1-0 semi-final first leg win for Atletico on Wednesday.

"It’s the most important goal of my career for sure, and it could be the most beautiful too,” said Saul.

"I was dribbling with the ball, I saw that I’d got by two opponents so when I got into the area I thought about getting it onto my stronger foot, and because it was on my left I placed it (the finish).”

Saul received his initial footballing education at Real Madrid, but said in a recent interview that he was mistreated at Atletico's more illustrious city rivals.

He switched to the Atletico academy as a 14-year-old and got his revenge against his former club last season by scoring a spectacular bicycle kick as Atletico thrashed Real 4-0, one of four goals in 14 starts in 2014-15.

Saul, who has made 36 starts this campaign, filling in as a defensive midfielder, centre back and on either wing, has impressed at both ends of the pitch.

His breathtaking goal against Bayern took his season's goal tally to nine.

“Saul has so many assets, he’s a very complete player,” said Simeone.

“I could see the move very well, he got away from the first man well, and could keep going. He is very strong, good in the one-on-ones."

“Saul is in a brilliant moment, it makes you full of joy to see all that is happening for him,” added Simeone.

“He deserves it for the work he does, the persistence he has shown, the motivation he has."

Bayern coach Pep Guardiola also praised the midfielder, who is a regular in Spain’s under-21 side but is yet to make his debut for the first team.

“I’ve watched him before and he’s a great player, Spanish football has another great talent,” he said.