Javier Hernandez’s late strike kept Real Madrid on course for a record-extending 11th European Cup crown with a 1-0 win over 10-man Atletico Madrid in a tense quarter-final at the Bernebau on Wednesday.

The first leg ended 0-0 and the tie appeared to be heading for a first goalless draw after two legs in Champions League knockout history until James Rodriguez slipped a pass through to Cristiano Ronaldo in the 88th minute.

The Portugal forward unselfishly squared for Hernandez and the Mexican striker stroked the ball past Atletico goalkeeper Jan Oblak to seal a 1-0 aggregate victory, Real's first win over Atletico in eight matches this season.

It was a bitter blow for Diego Simeone's men, who went toe to toe with the team that beat them in last year's final until playmaker Arda Turan was dismissed for a second booking 14 minutes from time and Hernandez applied the killer blow. "It was my turn to score but this is for everyone," an emotional Hernandez, who is on loan at Real from Manchester United, told with Spanish television.

"Atletico are a worthy opponent," added the 26-year-old, who was playing only due to an injury to Karim Benzema.

"Thank God, we were the worthy winners."

Real coach Carlo Ancelotti, missing injured regulars Gareth Bale, Benzema and Luka Modric, started with Hernandez up front with Ronaldo and centre back Sergio Ramos pushed forward into a defensive midfield role. Seeking to become the first team to retain the trophy in the Champions League era, Real had the upper hand in terms of possession and chances in a cagey first half. Atletico Madrid's Jose Maria Gimenez is dejected at the end of the match. Photograph: Sergio Perez/Reuters

Ronaldo forced a good save from Oblak with a 32nd-minute free kick before racing through with a clear site of goal a minute before halftime.

Oblak was again equal to the challenge, racing out to block Ronaldo’s fierce shot and deflect the ball away for a corner. Real threatened immediately at the start of the second period when Isco threaded a pass through for Hernandez but he scuffed his shot wide of the far post.

Atletico hopes suffered a massive blow when Arda picked up a second yellow for a foot-up challenge on Ramos and he was distraught as he trudged off to a cacophony of whistles.

The draw for the semi-finals is on Friday, with Barcelona, Bayern Munich and Juventus joining Real in the pot.

Juventus do perfect Italian job to knock out Monaco 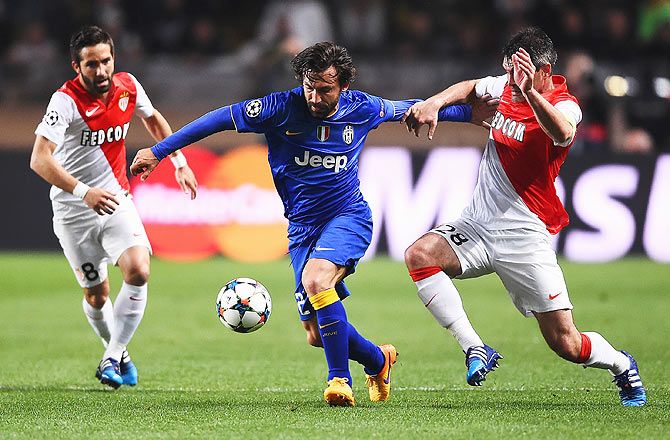 A trademark display of grit and resilience earned Juventus a goalless draw at Monaco as the Italian side qualified for the Champions League semi-finals for the first time since 2003 with a 1-0 aggregate victory on Wednesday.

Juve, the first Italian team to reach the last four of Europe's premier club competition since Inter Milan in 2010, were under the cosh throughout.

Chances were scarce, however and the visitors held firm against a Monaco side, who lacked the experience and cutting edge to overturn the deficit from the quarter-final, first leg.

The hosts, who eliminated Arsenal in the previous round, dominated possession and Geoffrey Kondogbia was a big influence in midfield but Leonardo Jardim's side did not have the guile to penetrate Juve's massed defensive ranks.

It was a case of youth versus experience as Juventus's Andrea Pirlo and Patrice Evra had 30 more Champions League appearances than the whole home side's starting team and Monaco's lack of nous was exposed as the match wore on.

"We went through thanks to our desire to sacrifice, to fight, to reach our goal," Juventus keeper Gianluigi Buffon told BeIN Sport.

"I think Juve deserved their qualification. Maybe not for today's game but for that mindset." Monaco were well on top in the early stages and Kondogbia hit a fierce 20-metre strike that flew just over the bar, while Bernardo Silva's low cross was almost deflected into his own net by Andrea Barzagli in the 15th minute.

Kondogbia continued to shine in midfield and had another chance but shot straight at Juve keeper Gianluigi Buffon, before the visitors, who were without injured midfielder Paul Pogba, began to wake from their slow start as the match wore on.

They nearly found a way through when Pirlo's pass looked bound for Stephan Lichtsteiner on the edge of the box before Danijel Subasic snatched the chance away from him. 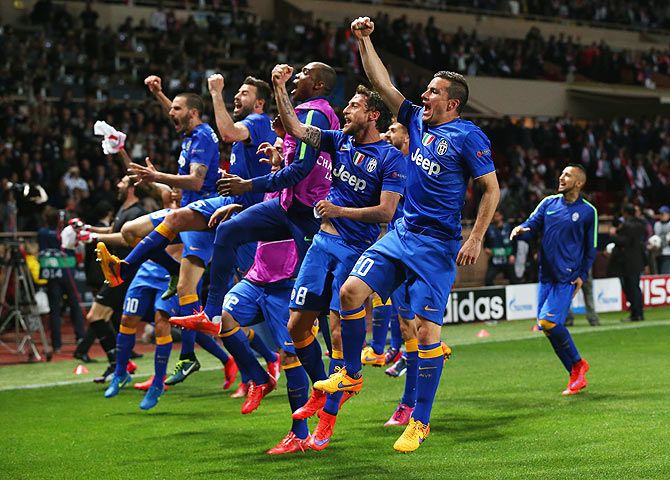 Juventus began to look increasingly fragile on the left side of their defence and Chilean midfielder Arturo Vidal was lucky not to concede a penalty when he appeared to bring Kondogbia down in the box, but referee William Collum waved play on.

Jardim replaced midfielder Jeremy Toulalan with Dimitar Berbatov at halftime and added fresh blood up front by switching Anthony Martial with Valere Germain 14 minutes form time, but it failed to unsettle Juventus, who saw the game out comfortably.

The last time Juventus reached the last four they went on to make the final in 2003, before losing to AC Milan on penalties.

© Copyright 2020 Reuters Limited. All rights reserved. Republication or redistribution of Reuters content, including by framing or similar means, is expressly prohibited without the prior written consent of Reuters. Reuters shall not be liable for any errors or delays in the content, or for any actions taken in reliance thereon.
Related News: Atletico Madrid, Javier Hernandez, Juventus, Cristiano Ronaldo, Real Madrid
SHARE THIS STORYCOMMENT
Print this article