The focus will all be on the Portuguese given his counterpart Walter Mazzarri is banned from the touchline for pushing an opponent in the group stage.

While Mazzarri roars on his charges from the stands at the noisy and cavernous San Paolo, Villas-Boas will cut another lonely figure on the touchline if Chelsea do not get a grip on their season.

The London side have won just two of their last 10 league games and drew 1-1 at home with second tier Birmingham City in the FA Cup fifth round on Saturday, prompting speculation Villas-Boas could be axed if the Napoli game goes badly.

"You need an extra mental push to feel that confidence in a different way, it comes with results and at the moment results are not happening so until you get out of that cycle with a win it perpetuates a bit," said Villas-Boas. 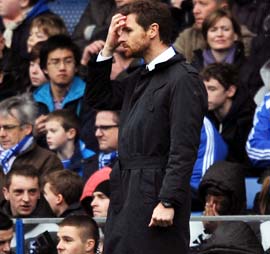 Asked why he thought his side could win at the San Paolo, he added: "Because it's football and sometimes it happens just like that, how you least expect. Napoli is a strong team but we are a strong team."

His ageing outfit are fifth in the English Premier League and in danger of missing the Champions League for next term as fans begin to wonder if one stellar year as coach of Porto has given the 34-year-old enough experience to cope at Stamford Bridge.

On Saturday, some chanted the name of former boss Jose Mourinho, who won two Premier League titles with Chelsea.

Chelsea's ruthless billionaire owner Roman Abramovich may have cut ties with Claudio Ranieri, Mourinho, Luiz Felipe Scolari, Avram Grant and Carlo Ancelotti when he felt results did not meet his high expectations but there is hope for Villas-Boas.

Guus Hiddink was considered as the most likely to candidate to be brought in to save Chelsea's season for a second time but the Dutchman signed with Russia's Anzhi Makhachkala last week.

To avoid Abramovich having a big decision to make before the second leg, Villas-Boas has to choose between misfiring Fernando Torres or Didier Drogba upfront.

The Ivorian came on for the Spaniard at halftime against Birmingham having returned from the African Nations Cup and looks the most likely to lead the line.

Frank Lampard was on the bench but could return in Naples with Chelsea looking void of ideas in the first half where Juan Mata missed a penalty.

Away from Europe where they have sparkled - helping knock out Premier League leaders Manchester City - Napoli have disappointed in Serie A but won 3-0 at Fiorentina on Friday to move up to sixth.

South American strikers Edinson Cavani and Ezequiel Lavezzi both scored in Florence to sharpen their form for the visit of the 2008 runners-up, who may be without captain and centre back John Terry because of injury alongside left back Ashley Cole.

"Both are in with a chance of making it," Villas-Boas said.

Uruguay's Cavani is licking his lips at the prospect of facing an injury-hit backline.

"We are looking forward to this great match in the Champions League on Tuesday and will give our utmost to get another great result for our fans, who will be there with us at the San Paolo," said Cavani, whose side may be without Hugo Campagnaro. 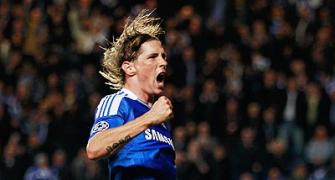 Torres not for sale at any price: Villas-Boas 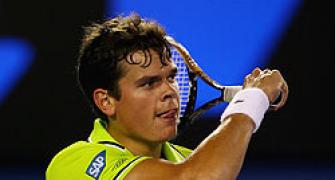 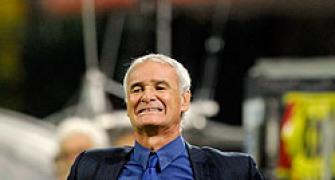