Tsitsipas hits back at critics after grasscourt title win 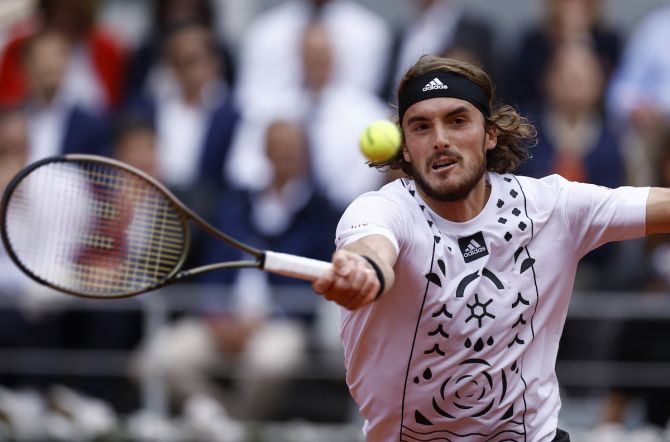 IMAGE: Greece's Stefanos Tsitsipas in action during his fourth round match against Denmark's Holger Rune at the French Open earlier this year . Photograph: Yves Herman/Reuters

Stefanos Tsitsipas believes he has proved a point to his critics ahead of Wimbledon by winning his maiden grasscourt title at the Mallorca Championships.

The Greek world number six beat Spaniard Roberto Bautista Agut 6-4 3-6 7-6(2) in the final of the ATP 250 event on Saturday ahead of the year's third Grand Slam, where he has never gone past the fourth round.

"I proved myself last week that it's not a surface I don't like. I like playing on grass, probably more than on clay.

"Last year was difficult for me. I didn't play a single match before Wimbledon on grass. I was trying to play on grass like I did on clay, which was a huge mistake. Technique-wise, tactics-wise, it all fell apart."

Tsitsipas, who lost to American Frances Tiafoe in the Wimbledon first round last year, said he watched videos to analyse his weak points.

"None of it made sense. I could also tell that from the practice sessions I had, the friendly matches that I did before, everything seemed to be a bit off," the 23-year-old added.

"With minor adjustments, you can always get back to where you want it to be. For me, it's a new start here at Wimbledon. I see myself a little bit different in terms of how I perceive this surface in particular.

"The thing that I hope for this year is just to get past the first round and see where that leads after."

Tsitsipas said he did not consider himself a title contender yet, with last year's runner-up Matteo Berrettini the in-form player among those who have not won the title.

"I'll probably have to get close to what he did last year, then see if I'm able to be a potential future champion. But I've got to start small first," Tsitsipas said.

"The last two appearances I had at Wimbledon weren't great. I want to see something different."