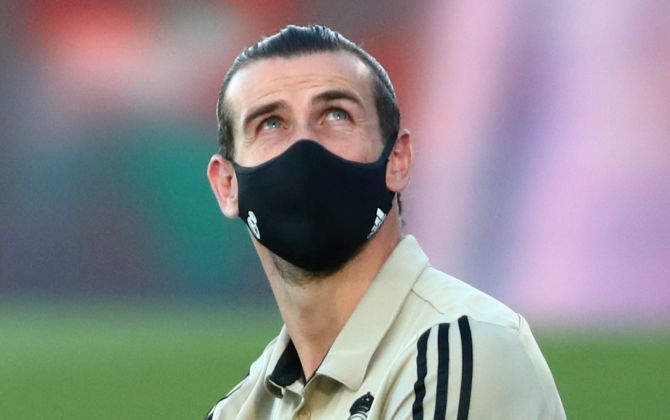 IMAGE: Gareth Bale has a contract with Real Madrid until 2022. Photograph: Sergio Perez/Reuters

Tottenham Hotspur are in talks with Real Madrid to re-sign winger Gareth Bale, his agent said on Tuesday, as the Wales international looks to end his troubled spell at the Spanish club.

The 31-year-old has scored over 100 goals for the Madrid side and won numerous trophies, including four Champions League titles, but was give limited playing time under Zinedine Zidane towards the end of last season's La Liga triumph.

"We are talking (Spurs, Real and Bale's camp). It's where he wants to be."

Bale endured his worst season at the Spanish club in 2019-20 with only three goals in all competitions and admitted earlier this month that he would consider a return to the Premier League if Real allow him to end his stint in Spain.

Bale has since divided opinion among the club's fanbase, with some supporters frustrated by a perceived lack of commitment from the Welshman.

He did not feature in their final seven league matches as they pipped Barcelona to the Liga title while he watched on from the bench.

Arsenal striker Pierre-Emerick Aubameyang has signed a new three-year deal, the Premier League club said on Tuesday, ending speculation over a potential exit as he entered the final year of his contract.

Aubameyang’s decision to stay with Arsenal will be a major boost to manager Mikel Arteta who said he wanted to build the squad around the Gabon international after they won the FA Cup last month.

"Signing for this special club was never in doubt," Aubameyang said in a statement here. "It's thanks to our fans, my team mates, my family and everybody at this club that I feel like I belong here.

“I believe in Arsenal. We can achieve big things together. We have something exciting here and I believe the best is to come for Arsenal.”

British media reported Aubameyang’s new contract makes the 31-year-old one of the highest earners at the club alongside midfielder Mesut Ozil.

Aubameyang’s return of 72 goals for Arsenal in 111 appearances since his arrival in 2018 has made him a vital member of the squad, with the striker even taking the captain’s armband in the second half of the season last year.

With Arsenal in danger of missing out on European football for the first time in 25 years following an eighth-placed league finish, Aubameyang led from the front to help Arteta’s side win the FA Cup and qualify for the Europa League.

The striker scored twice in the semi-final victory over Manchester City and repeated his heroics in the final in a 2-1 comeback win over Chelsea.

Aubameyang ended last season as the club’s top scorer with 29 goals -- which included 22 in the league, one goal shy of Golden Boot winner Jamie Vardy. He was also the only Arsenal player named in the Team of the Year.

Olympique Lyonnais on Tuesday poured cold water on reports that their Dutch international forward Memphis Depay is on the brink of a 30-million euro ($35.54 million) move to Barcelona.

Dutch media reported on Tuesday that the Catalan club, where former Netherlands coach Ronald Koeman recently took over, were on the brink of signing the 26-year-old striker.

Yet Lyon president Jean-Michel Aulas said the Spanish giants had told him Depay was too expensive for them.

"The president of Barça (Josep Maria Bartomeu) told me on Sunday that Barça was suffering a lot from the COVID-19 crisis and have no possibility of making an offer," Aulas tweeted on Tuesday (@JM_Aulas).

Depay is under contract at Lyon until next year, having joined them from Manchester United three years ago.

He helped the French club to the semi-final of the Champions League last month and scored a hat-trick as Lyon kicked off the new Ligue 1 campaign with a 4-1 home win over Dijon on August 28.

Lazio have signed Kosovo striker Vedat Muriqi from Turkey's Fenerbahce for an initial fee of 17.5 million euros ($20.74 million), the Turkish side said on Tuesday.

The fee could rise to 20 million euros with add-ons dependent on future results, the Turkish club added.

Fenerbahce also negotiated a sell-on fee of 5% of a future transfer fee should Lazio sell Muriqi to another club.

The 26-year-old Kosovo international scored 17 goals in 36 appearances for Fenerbahce.

Newcastle United forward Yoshinori Muto will spend the 2020-21 season on loan at Spanish side Eibar, the Premier League club said in a statement on Wednesday.

The 28-year-old Japan international joined Newcastle from Germany's Mainz on a four-year contract in August 2018 for a transfer fee that British media reported was around 9.5 million pounds ($12.25 million).

Muto, capped 29 times by his country, managed only two goals from 28 appearances in all competitions for Newcastle.

Newcastle have boosted their attacking options by signing striker Callum Wilson and winger Ryan Fraser among others during the close season and began the 2020-21 league campaign with a 2-0 win at West Ham United.

Steve Bruce's side, who advanced to the third round of the League Cup with a 1-0 victory over Championship (second-tier) side Blackburn Rovers on Tuesday, face Brighton & Hove Albion in the Premier League on Sunday.