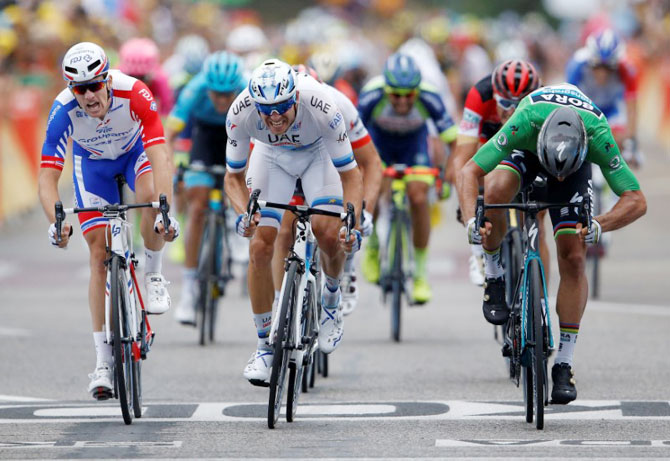 With most of the top sprinters out of the Tour de France after punishing mountain treks, world champion Peter Sagan claimed a third stage victory at the Tour de France on Friday, winning the relatively flat 169.5-km ride from Bourg d’Oisans by a whisker.

Sprinters Fernando Gaviria of Colombia and Dylan Groenewegen of the Netherlands, winners of two stages each, abandoned the race during Thursday’s stage ending atop the iconic Alpe d’Huez, exhausted after an opening block of racing in extreme heat.

Slovak Sagan, however, went through the first three mountain stages with relative ease and had enough gas in the tank for the final effort in Valence, where he outsprinted Norway’s Alexander Kristoff and Frenchman Arnaud Demare into second and third place respectively.

"My team did an amazing job. I took Kristoff's wheel for the sprint," said Sagan.

Briton Geraint Thomas retained the overall leader’s yellow jersey after he and Team Sky mate Chris Froome were booed by the crowd before the start.

The stage went through Virille, once home to 1990 Tour King of the Mountains Thierry Claveyrolat, who committed suicide in 1999.

The peloton set off from Bourg d'Oisans without Vincenzo Nibali after the 2014 champion withdrew from the race following a crash apparently caused by a spectator in the climb up to l'Alpe d'Huez.

Schar went solo with 25km remaining, but Demare's Groupama FDJ team accelerated in front of the peloton to set up a mass sprint, and it was a compact bunch five kms from the line.

In yet another incident affecting the race, a flare was thrown into the peloton with under 20kms left, but no riders were injured.

One kilometer from the finish, former world champion Philippe Gilbert jumped away from the speeding pack but came up short.

Demare launched a sprint 200 meters from the line, only for Sagan to come around and snatch his 11th career Tour victory and extend his lead in the points classification.