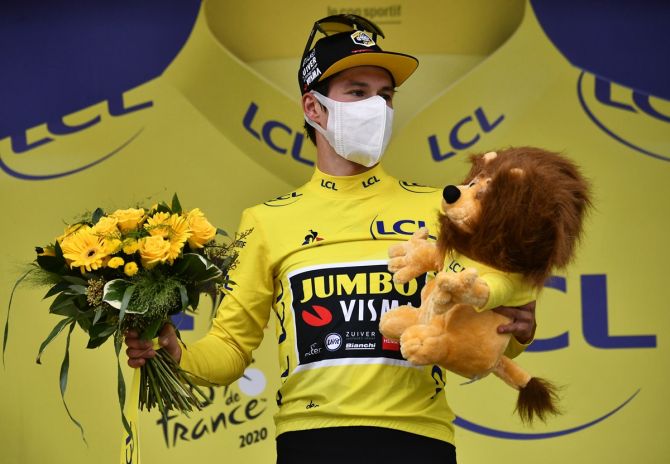 Primoz Roglic took command of the Tour de France despite narrowly losing out to fellow Slovenian Tadej Pogacar on the ninth stage as Briton Adam Yates's limits were exposed in the second mountain test on Sunday.

The Slovenian played it safe on the last climb of the day but it was enough for him to move to the top of the standings in a ninth stage won by Tour debutant Pogacar.

The 21-year-old Pogacar, the most attacking rider on the final climb up to the Col de Marie Blanque, outsprinted Roglic and breakaway rider Marc Hirschi of Switzerland to move up to seventh overall, 44 seconds off the pace.

"It was an amazing day, I gave everything in the last climb but I could not drop my rivals. But the stage win makes up for it," said Pogacar, who finished third overall in his grand tour debut on the Vuelta last year.

Yates, who made no mystery of his limited ambitions on the Tour, ended the stage in 15th place, 54 seconds off the pace, and dropped down to eighth overall.

As the race heads into its first rest day, when all the riders will be submitted to a coronavirus test, Roglic sits in pole position but Colombian Bernal, who relishes the long climbs of the Alps coming in the third week, is also where he wanted to be.

After attacking on the final climb on Saturday, Pogacar was on the offensive again on the ascent to the Col de Marie Blanque, a 7.7-km effort at an average gradient of 8.6%, but Roglic, Bernal and Spain's Mikel Landa followed.

Roglic picked up a five-second bonus at the top of the pass, situated 18 kilometres from the finish, and the small group caught former Under-23 world champion Hirschi 2.5 km from the line.

Pogacar was the fastest man to the line as he gained back more time back after losing 1:20 in the crosswinds on Friday.

France's Guillaume Martin, who started the day second overall, slid down to third, 28 seconds off the pace, after losing touch with the top guns on the ascent to the Col de Marie Blanque.

The day after Thibaut Pinot lost all hope of becoming the first local winner of the Tour in 35 years, another Frenchman, Romain Bardet, was sitting in fourth place overall, 30 seconds behind Roglic.

Improving Bernal waiting for his moment on the Tour de France

Egan Bernal might not look as strong as the Slovenian duo of Primoz Roglic and Tadej Pogacar after a week of racing on the Tour de France, but the defending champion is waiting for the right moment to put the hammer down.

Jumbo Visma's Roglic leads the general classification after taking bonus seconds on the fourth stage, which he won, and on Sunday's ninth stage in Laruns.

Pogacar of Team UAE Emirates has been the most attacking rider in the Pyrenees and prevailed from a group of favourites to win in Laruns.

Yet Bernal, who appeared to struggle on Saturday, was in better shape on Sunday and sits in second place overall, 21 seconds off the pace.

Pogacar, who lost 1:20 in crosswinds on Friday, is seventh, 44 seconds behind Roglic.

"It was a good day because it's not just about the time today," said Bernal, who lost 11 seconds to Roglic and 12 to Pogacar in time bonuses on Sunday.

Ineos Grenadiers's Bernal is biding his time, waiting to make his move on the longer climbs in the Alps, where the Tour will go above an altitude of 2,000 metres.

"On short climbs, you can't do too much. But today I was feeling good, it gives me a bit of confidence for the next part of the race," the 23-year-old said.

"I know that I have lost time to Roglic and Pogacar again, but I stay focused, I take it day by day, this is a three-week race."

Roglic predicted that "a lot of things can still happen", and Colombia's Bernal said it was about waiting for the right moment.

"It depends on the legs. If you don't have the legs you cannot do anything," he said.

"You have to wait for the right moment, you have to feel it. You need to be on the bike and feel it, look at the others and make a big difference on a good day."

© Copyright 2021 Reuters Limited. All rights reserved. Republication or redistribution of Reuters content, including by framing or similar means, is expressly prohibited without the prior written consent of Reuters. Reuters shall not be liable for any errors or delays in the content, or for any actions taken in reliance thereon.
Related News: Primoz Roglic, Egan Bernal, Tadej Pogacar, Col de Marie Blanque, Briton Adam Yates
SHARE THIS STORYCOMMENT
Print this article 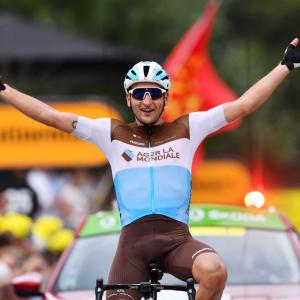