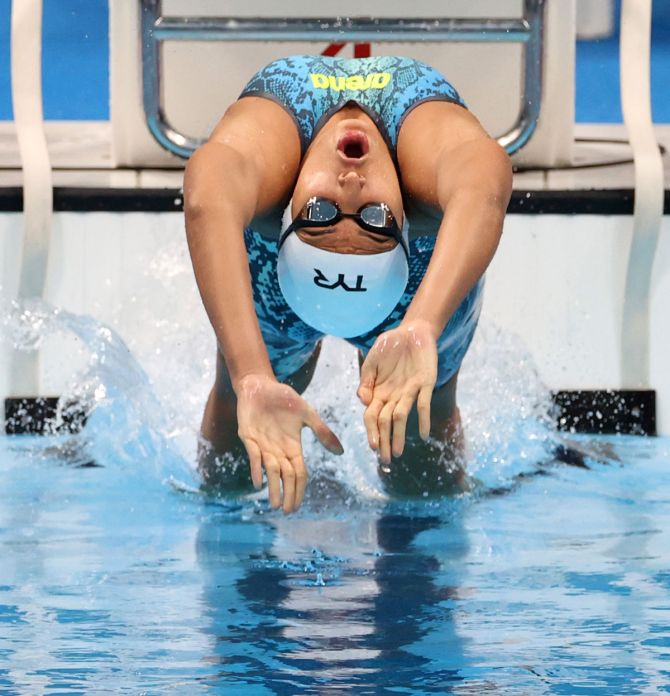 India’s swimmers Srihari Nataraj and Maana Patel's Olympic campaign came to an end, the two youngsters failing to qualify for the semi-finals of their respective events, in Tokyo, on Sunday.

Competing in their maiden Olympics, both swimmers put up underwhelming performances and were unable to match their personal best times in the 100 metres backstroke.

It was a disappointing display by the Bengaluru swimmer, who had raised everyone's expectations by consistently shaving off time from his personal best in the run-up to the Tokyo Games.

The 20-year-old has a personal best of 53.77s that he had clocked at the Sette Colli Trophy in Italy to qualify for the Olympics last month.

Had Srihari clocked his personal best he would have qualified for the semi-finals as Joseph Armstrong of the United States and Greece's Apostolos Christou, the last two swimmers to qualify for the semis, clocked the same time.

Overall, Srihari was ranked 27 among the 40 swimmers. The top 16 swimmers qualify for the semi-finals.

On the other hand, Maana, swimming in the slowest heat, finished with a time of 1.05.20s behind Zimbabwe's Donata Katai, who clocked 1:02.73s, while Grenada's Kimberly Ince (1:10.24s) finished third in the three-swimmer field.

The 21-year-old Indian qualified for the Games via a "Universality quota" that allows one male and one female competitor from a country to participate in the Olympics, provided no other swimmer from the same gender qualifies for the Games or receives a FINA invite based on his or her Olympic Selection time (B time). She finished 39th overall.

She had clocked 1:03.77s at the Belgrade Trophy in Serbia last month.

It is the first time three swimmers from India are competing in the Olympics. Sajan Prakash will be action in the men's 200m butterfly event on Monday.