Olympics: Biles out of team event as Russians beat US to gold 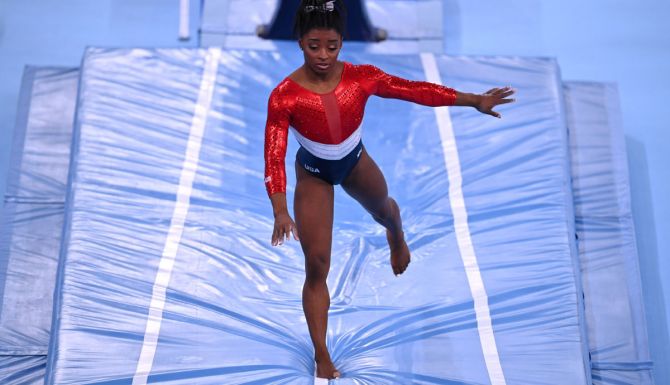 IMAGE: Simone Biles' bid did not get off to a great start, with a disappointing score of 13.766 on the vault in the first rotation. All three Russians who vaulted scored higher, as did her US team mates. Photograph: Dylan Martinez/Reuters

Simone Biles' bid for a record six gold medals at the Tokyo Games ended abruptly on Tuesday when she dropped out of the women's team final after one vault and watched as the United States surrendered their title to Russia.

It was a stunning and disappointing start to the Olympics for the US women, who had expected to dominate the final as they had not been beaten in a major team competition since 2011.

But the entire event was turned on its head in an instant when Biles, the world and Olympic all-around champion, completely mistimed her opening vault to earn a low score of 13.766. 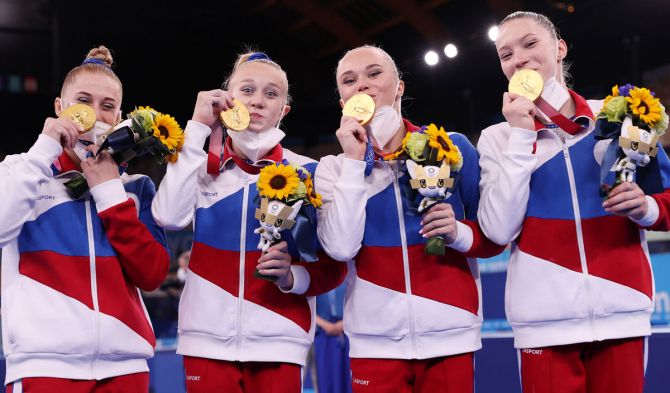 It was a setback the US would never recover from as Russia claimed the team title for the first time since the Unified Team at the 1992 Barcelona Games while the US winners in 2012 and 2016 settled for silver and Britain the bronze.

Despite taking a single vault Biles will add a silver medal to the five she won at the Rio 2016 Games, including four golds. But the 24-year-old American's bid to become the greatest female Olympian of all-time with 10 golds is over and perhaps her entire Tokyo Olympics.

USA Gymnastics said the 24-year-old's continued participation in the Games is uncertain.

"Simone has withdrawn from the team final competition due to a medical issue," said USA Gymnastics. "She will be assessed daily to determine medical clearance for future competitions."

Biles had been leading the United States' defence of their women's gymnastics team title, and was looking to add to her haul of four gold medals won at the 2016 Rio Olympics.

Her bid did not get off to a great start, with a disappointing score of 13.766 on the vault in the first rotation. All three Russians who vaulted scored higher, as did her US team mates. 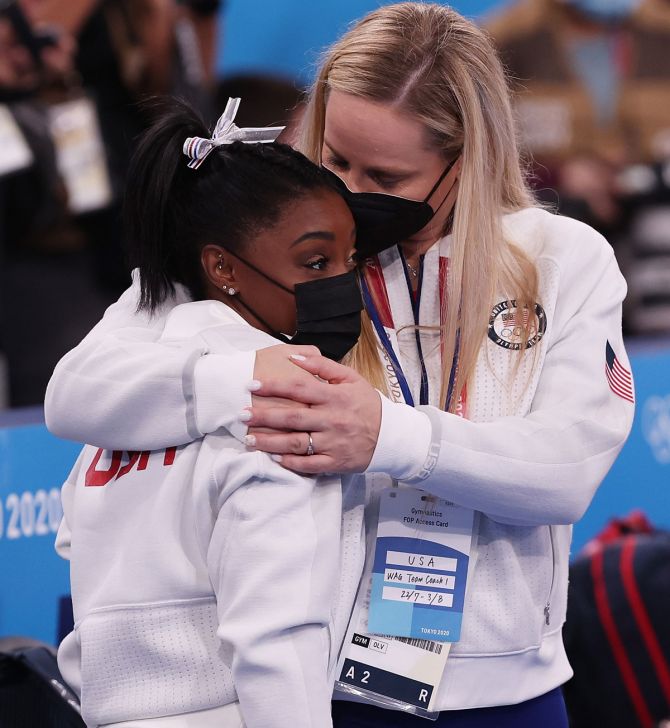 Stunned and near to tears Biles, gold medal winner on the vault at the Rio Olympics, sat dejected in a chair as coaches and team mates surrounded her before moving onto the uneven bars sitting second 1.067 behind their Russian rivals.

Biles, however, appeared to be more than simply disappointed leaving the arena with the trainer as her team mates warmed up on the uneven bars.

By now coaches and officials sprinkled throughout the Ariake Gymnastics Centre had begun to chatter as the world and Olympic all-around champion reappeared minutes later slipping into her warm-up gear.

With Biles on the sidelines her spot was filled by Jordan Chiles as the US title defence continued. 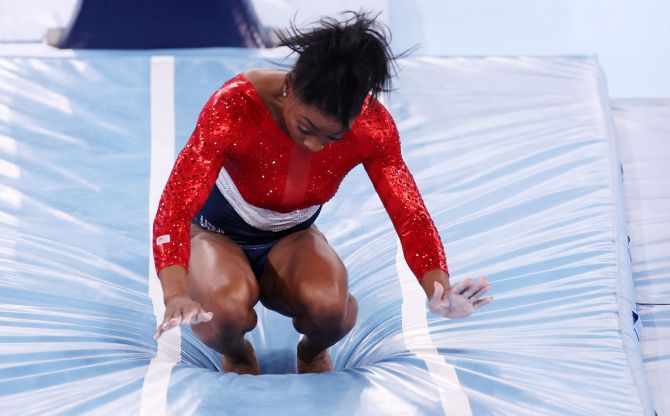 IMAGE: Simone Biles's bid to become the greatest female Olympian of all-time with 10 golds is over and perhaps her entire Tokyo Olympics. Photograph: Jamie Squire/Getty Images

Winning the six golds on offer in Japan would have lifted Biles to 10 - one more than Russian gymnast Larisa Latynina’s women’s record of nine gold medals won over three Olympic Games - Melbourne 1956, Rome 1960 and Tokyo 1964 - and confirmed her status as the greatest gymnast of all time.

The US had dominated the team event in recent major championships but there have been warning signs flashing in Tokyo.

Led by Biles, the reigning world and Olympic all-around champion, the US had been expected to saunter away with the team title for a third successive Games, but an uninspired display in Sunday's qualifying that saw the resurgent Russians shine sparked rumblings that the American reign was in danger.

Russia, competing at the Tokyo Games as representatives of the Russian Olympic Committee (ROC) because the country was stripped of its flag and anthem for doping offences, have not won the women's team title since competing as the United Team at the 1992 Barcelona Olympics.