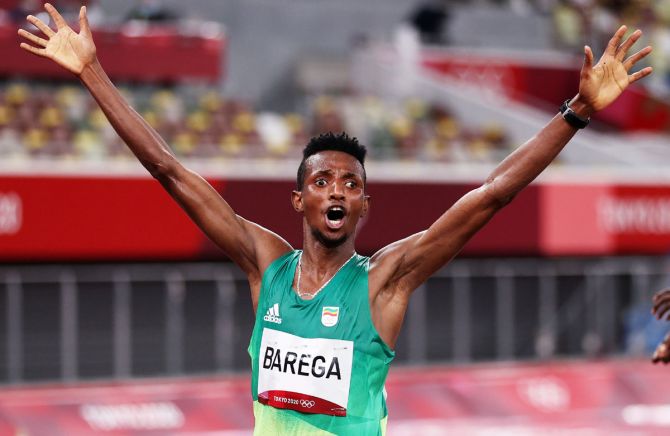 IMAGE: Ethiopia's Selemon Barega celebrates as he crosses the finish line to win gold in the men's 10,000 metres at the Tokyo Olympic Games at Olympic Stadium in Tokyo, on Friday. Photograph: Patrick Smith/Getty Images

The Olympic athletics programme opened with a huge surprise and a shock disqualification on Friday as Ethiopian youngster Selemon Barega claimed a stunning 10,000 metres gold and the US blew their chances in the 4x400m mixed relay.

There was only one gold up for grabs, in the last event of the opening day, but it was worth the wait as Ugandan world record holder Joshua Cheptegei allowed the 21-year-old Barega to escape and win in 27 minutes 43.22 seconds before celebrating with an infield dance on a sultry night.

Hot favourite Cheptegei left it way too late to chase him down and only just caught 20-year-old compatriot Jacob Kiplimo on the line to take silver.

As the rest of the field crossed the line, athletes crashed to the track, utterly exhausted by the 30 degree heat and heavy humidity, which looks set to be a defining and challenging aspect of the track and field programme. IMAGE: Sifan Hassan of the Netherlands, right, crosses the finish line first ahead of Agnes Jebet Tirop of Kenya in Heat 1 of the Women's 5000m Round 1. Photograph: Christian Petersen/Getty Images

The tough conditions could play a part in whether Sifan Hassan follows through with her bid for an unprecedented triple of 10,000, 5,000 and 1,500 metres, which got underway with her easing through her heat to reach the 5,000 final.

It would have seemed sensible for the Dutchwoman to have tried to preserve energy by she raced through the line, punching the air as if her life depended on finishing first and as favourite for Monday's final.

The conditions were not to blame in the inaugural mixed 4x400m relay, which delivered its expected excitement even if the only "crowd" on site to witness it was made up of team mates and officials doing all they could to create some atmosphere.

Only one country, Nigeria, opted to change the established man-woman-woman-man running order and for a while it looked a good move as their third leg man opened a big lead in their heat, only for the entire field of anchor leg men to sweep past the female Nigerian in the final straight. IMAGE: United States team were disqualified for exchanging the baton outside the box, as several teams seemed confused by the track markings during the 4x400 Relay Mixed Round 1. Photograph: Richard Heathcote/Getty Images

The heavily-fancied United States team won their heat comfortably but were disqualified for exchanging the baton outside the box, as several teams seemed confused by the track markings.

Poland, Netherlands, Jamaica and Britain were the fastest qualifiers for Saturday's final.

Triple jumper Yulimar Rojas' bid to become the first woman Olympic gold medallist from Venezuela got off to a strong start with the double world champion soaring past the qualifying mark for the final with her first attempt. 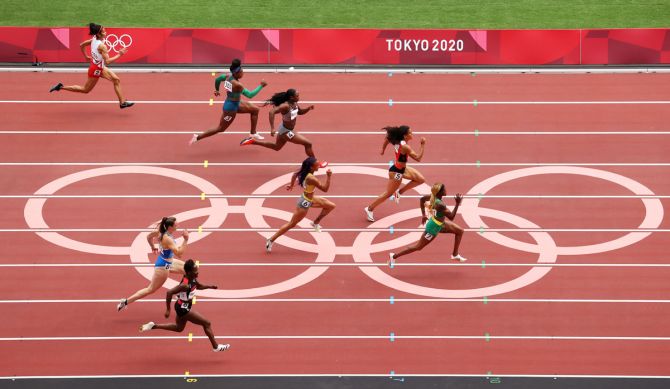 Earlier in the day, the women 100 metres sprinters opened the programme with some unexpectedly rapid heat times.

Defending champion Elaine Thompson-Herah showed she is not going to stand aside to hand a hat-trick of titles to compatriot Shelly Anne Fraser-Pryce when she posted a hugely impressive 10.82 seconds while easing up. Fraser-Pryce was in cruise mode to clock 10.84.

Marie-Josee Ta Lou of the Ivory Coast set an African record of 10.78 as the combination of a fast track and new spike technology suggested Saturday's final could be something special. The men also begin 100m heats on Saturday.