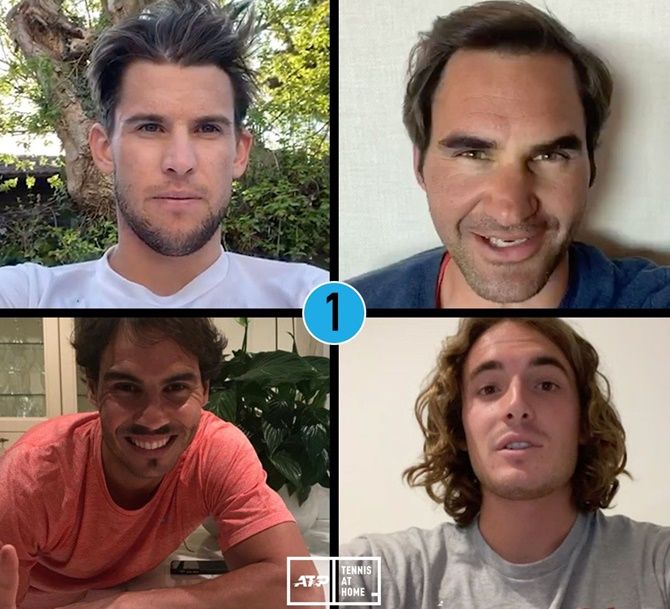 The Swede, now a respected analyst with broadcaster Eurosport, also believes the enforced stoppage of tennis because of the COVID-19 pandemic is the ideal time for some re-branding to attract a new generation of fans.

"Truth is, and I hate to say it, we are going to lose the greatest player of all time in terms of interest in a year or two when Roger stops," Wilander said by phone.

"We have a new breed of men and women that are really exciting, great athletes, great attitude but they are missing out on a bit of the limelight while the likes of Federer and Rafael Nadal and Novak continue to play. Now is the time to re-brand the sport a little to attract a younger audience. Maybe we can see more men's and women's combined events so the young players can be marketed better."

Federer's suggestion via social media on Wednesday certainly opened a debate, with players past and present reacting positively while the ATP Chairman Andrea Gaudenzi said the sport had a 'big opportunity' to create unity.

Currently the men's and women's Tours operate independently, although there are a handful of events featuring male and female draws, one of which is the Madrid Open that will be played as a 'virtual tournament' next week.

"Tennis has always been at the forefront of equality between men and women's prizemoney," Wilander said. "This is a perfect time to somehow make it a working relationship where we combine."

"Some tournaments wouldn't work as men's and women's event but others would. It's about demographics and being flexible and adapting to the market. But it's a necessity for tennis to attract younger fans going forward. The average age of the tennis fan is over 50."

There has been no professional tennis since March and the shutdown will last until at least the end of July.

Wilander says the break will be much tougher for the younger players such as Stefanos Tsitsipas and Alexander Zverev than the likes of world number one Novak Djokovic, Federer and Nadal.

"Obviously we lose a year of the chase in the history books but at the same time who really cares who ends up with the most majors?" Wilander said.

"It hurts Novak more because he was in great form and Roger is getting older. But for the younger players a break like this is much tougher. Yes, they are obviously going to be able to practise at some point, somewhere, but not playing matches?"

"The only way to improve when you're 21 is through confidence and growing the knowledge. Federer can be off for six months but knows how to win matches. The younger players are still forming their ways to win matches."

Wilander fears the loss of income during the suspension of tournaments could see some players quit the Tours and says everything must be done to sustain the depth of fields.

"Maybe fans don't want to watch those ranked from 100 to 300 because they don't know their names but their level is extremely high and they make up the Tour," he said.

"You'll always have a number one, they come and go, but you can't lose those players down to 300. Hopefully when we come back it will be easier and more organised to see your path to professional tennis. At the moment it's like 'am I a pro or not?' It's very messy."