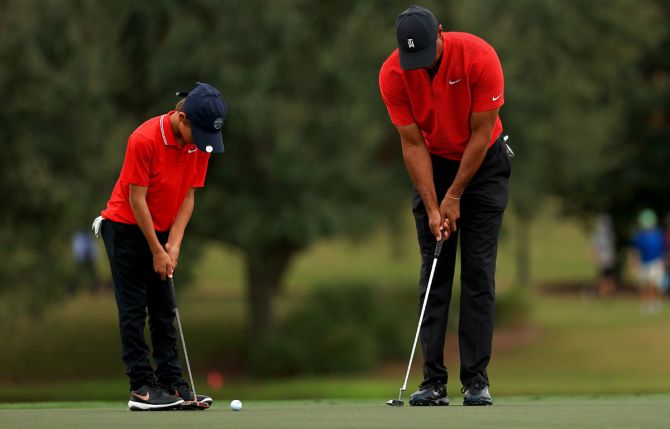 IMAGE: Tiger Woods and son Charlie made their debut last year at PNC Championship when they finished in a share of seventh place in the 20-team event. Photograph: Mike Ehrmann/Getty Images

Tiger Woods, who is unsure when he will return to the PGA Tour after sustaining serious leg injuries in a car crash, said on Wednesday he would compete with his 12-year-old son Charlie at next week's PNC Championship in Orlando.

The December 18-19 event is a 36-hole tournament with a field typically comprised of major champions and their parents or children.

"Although it's been a long and challenging year, I am very excited to close it out by competing in the @PNCchampionship with my son Charlie," Woods wrote on Twitter. "I'm playing as a Dad and couldn’t be more excited and proud."

Last month, Woods posted a video to social media of him swinging a club along with the caption "making progress" and last week he logged practice time at the Hero World Challenge event he hosted in the Bahamas. 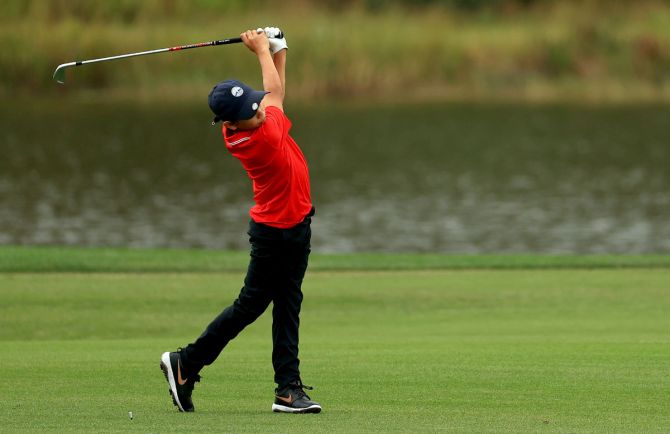 Woods suffered serious injuries to his right leg and foot when he lost control of his car in Los Angeles in February and faced the possibility of having his leg amputated during a three-week hospital stay.

Last week the 15-times major champion held his first news conference since the accident and said that while his game was nowhere near ready for the PGA Tour it was good enough to play "hit-and-giggle".

That comment led many to believe the 15-times major champion would announce his return to golf for the PNC Championship given that it is held near his home on a flat course with no rough and his son could hit all the tee shots. For Woods and his son, this will mark their second time playing in the tournament having made their debut last year when they finished in a share of seventh place in the 20-team event.

Among those playing in this year's event is nine-times major champion Gary Player, who said he was looking forward to seeing Woods back on the course.

"I think I speak on everyone's behalf when I say the sports community is thrilled to see you back on the course!" Player, who will be competing with his grandson, wrote on Twitter.