Abhijit Chadha shone bright for India with a flawless opening card in his debut European Tour event but it was Thai youngster Chinnarat Phadungsil who stole the thunder from several stalwarts by turning in a sensational 11-under 61 on Day one of the Avantha Masters golf tournament in Greater Noida on Thursday.

Abhijit, who ended the day on tied second, was the morning leader with his flawless performance before Phadungsil turned the spotlight on himself.

Abhijit, the PGTI's Emerging Player of the Year, reveled in home conditions and picked up birdies on the 15th, 16th, 4th, 5th, 6th and the 9th hole to return a card of 66.

But it was Phadungsil who sparkled with 11 birdies, eight of which came in a stunning back-nine on a day when the euro 1.8 million tournament's biggest draw, Ryder Cup star Colin Montgomerie, looked in danger of missing the cut with a four-over 76.

It was a remarkable performance from the 24-year-old Phadungsil, given that he had missed cuts in the two Asian Tour tournaments he played this year.

"My game was very smooth today and this is the best round of golf I have played," said the youngster, whose previous best came way back in 2007 when he hit a nine-under in China.

In fact, when Phadungsil teed up at Avantha Masters last year, it was quite an anti-climax as he failed to stay on for weekend action.

"I am feeling a little bit of pressure ahead of tomorrow but I will just try to give my best. My target is my game," said the player, who is coached by his dad. 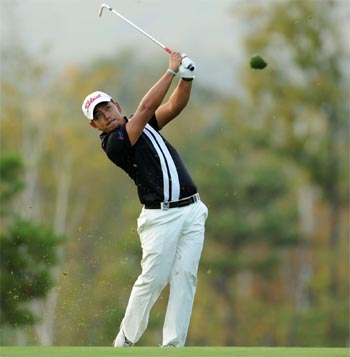 Abhijit acknowledged that being familiar with the course certainly helped him.

"I play here a lot. We just had a small tournament last month. I played six rounds then and that obviously helped," said the 21-year-old Chandigarh-lad, who teed off from the 10th hole.

"The putter was hot today. I holed almost everything. I made a 40-footer for birdie on the 16th and converted two 25-feet birdie putts on the sixth and ninth.

"I hit long so this course suits my game. My average driving distance is 300 yards and with my new driver, I have been hitting it even further. The conditions were quite tough in the morning with the wind so I am all the more pleased with my six-under," Abhijit said.

The other Indians in fray did not do too badly either with the fast-rising Rashid Khan being the next best-placed at tied seventh with a card of five-under 67.

Seasoned pro Jeev Milkha Singh, on the other hand, was unlucky in the closing stages of play. Steady at five-under till the 17th hole, Jeev conceded a drop shot after failing to recover the ball from the bushes.

He dropped another shot on the 18th to sign a card of 69 that left him with a share of the 30th position, followed by Jyoti Randhawa at tied 45th. Shiv Kapur was even-par with three birdies and an equal number of bogeys and was tied for the 78th spot along with defending champion Jbe Kruger among others.

For Colin Montgomerie, it was a thoroughly forgettable opening day, which saw him drop four bogeys, two on each nine.

The Scot, considered the best player never to have won a Major, failed to strike a single birdie and was lying bottom of the heap at tied 148th, facing the danger of missing the cut, along with PGTI Player of the Year Shamim Khan.