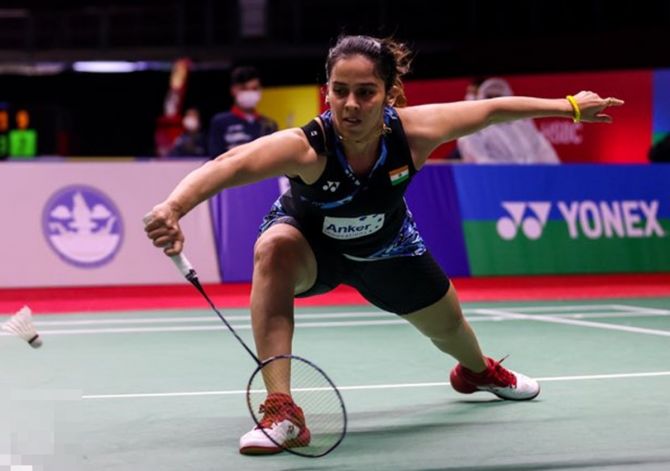 Star India shuttler Saina Nehwal was knocked out of the Yonex Thailand Open Super 1000 after losing the women's singles second round to Thailand's Busanan Ongbamrungphan, in Bangkok, on Thursday.

In a battle of attrition, Saina managed to grab the opening game but ran out of steam in the end, losing 23-21, 14-21, 16-21 in a match that clocked 68 minutes. It was Saina's fourth straight loss to the world number 12 Busanan.

Saina and Busanan engaged in some long rallies but it was the Thai shuttler who had the last laugh as she dished out some delectable drops and also stood out with better placement of shots.

Busanan opened up a 3-0 lead early on but Saina slowly came back and took a narrow 6-5 lead. A cross court shot helped Busanan turn the tables again as she led 11-9 at the break.

The Thai player maintained her two-point cushion till 15-13 but a precise stroke at the backline helped Saina to draw parity. The duo then moved neck and neck till 17-17 before Saina managed to eke out a two-point lead with a superb net shot.

Saina held a couple of game points with her opponent miscuing a net shot but Busanan once again caught up with the Indian, grabbing a game point herself.

Saina made her rival twist and turn across the court and then produced another precise shot at the backline to again take the lead. She pocketed the game when Busanan's weak return found the net.

In the second game, Busanan again ran up a 5-3 lead with Saina committing few unforced errors. The Thai looked in control as she moved to 10-6 before going into the interval with a four-point lead.

Busanan continued her fine run and strengthened her net play too to extend the advantage to 15-9. Saina narrowed the deficit with four straight points.

Busanan, however, broke the run of points by reeling off five points on the trot to reach game points and roared back into contest when the Indian hit wide.

After the change of sides, the Thai girl was quick to jump to a 5-1 lead. Saina managed to cut down the lead to 4-6 but things were not going too well for her as she either found the net or hit long.

In the men's singles, former world number one Kidambi Srikanth was forced to give a walkover to his eighth seeded Malaysian opponent Lee Zii Jia after pulling up his right calf muscle.

Earlier in the day, Indian men's doubles pair of Satwiksairaj Rankireddy and Chirag Shetty bowed out of the competition after suffering a 19-21, 17-21 defeat against second seeded Indonesian combination of Mohammad Ahsan and Hendra Setiawan.

Later in the day, Satwik and his mixed doubles partner Ashwini Ponnappa went down 12-21, 17-21 to Hong Kong pairing of Chang Tak Ching and Ng Wing Yung to draw curtains on India's campaign.