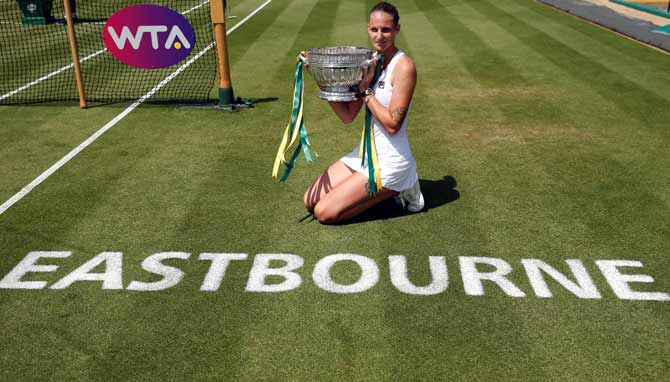 Karolina Pliskova warmed up for Wimbledon in the best possible fashion on Saturday by powering past Angelique Kerber 6-1, 6-4 to win the Eastbourne title.

The Czech second seed claimed her second career title at Eastbourne without dropping a set all week, and reigning Wimbledon champion Kerber had no answer to her opponent's powerful serve and precise forehand.

Pliskova, who sent down 33 winners and seven aces en route to winning her third title of the year, said she was pleased at the level she had reached ahead of Wimbledon.

"All week I was playing quite perfect tennis and didn't drop a set," Pliskova said. "Angelique for sure is one of the best grass court players. It's my third final and in two of them I have won. I just enjoy myself here."

It was a third consecutive defeat in an Eastbourne final for Kerber, who nonetheless heads into Wimbledon after a solid grass court campaign.

The German will face compatriot Tatjana Maria in her first match at Wimbledon on Tuesday, while Pliskova takes on China's Zhu Lin on Monday. 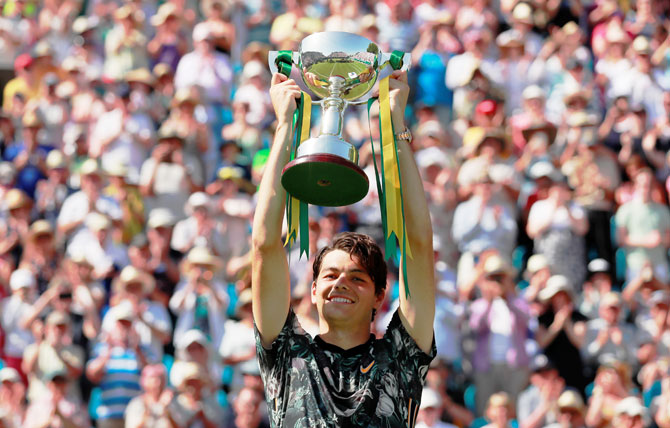 Playing only his second final, Fritz made a solid start to break Querrey to love in his first return game.

Fritz went on to dominate the majority of the baseline rallies, while Querrey was undone by unforced errors in key moments of the match.

The 21-year-old Fritz clinched another early break of serve in the second set before closing out the victory in just over an hour with an ace.

Fritz, son of former top-10 player Kathy May, will look to carry his success over to Wimbledon, where he begins his campaign against Czech Tomas Berdych on Tuesday.

Querrey, who was playing his first final since the New York Open in 2018, will meet world number four Dominic Thiem in his opening match.

Coric withdraws from Wimbledon with injury

The 22-year-old had been drawn to play Slovenian Aljaz Bedene in the opening round.

Italian 17th seed Matteo Berrettini has now moved into Coric's spot in the draw with Canadian Brayden Schnur gaining a place in the first round as a lucky loser.

Coric injured himself at Halle this month where he withdrew in his quarter-final match.

© Copyright 2020 Reuters Limited. All rights reserved. Republication or redistribution of Reuters content, including by framing or similar means, is expressly prohibited without the prior written consent of Reuters. Reuters shall not be liable for any errors or delays in the content, or for any actions taken in reliance thereon.
Related News: Karolina Pliskova, Borna Coric, Angelique Kerber, Eastbourne, Matteo Berrettini
SHARE THIS STORYCOMMENT
Print this article

Wimbledon: Prajnesh to meet Raonic in first round