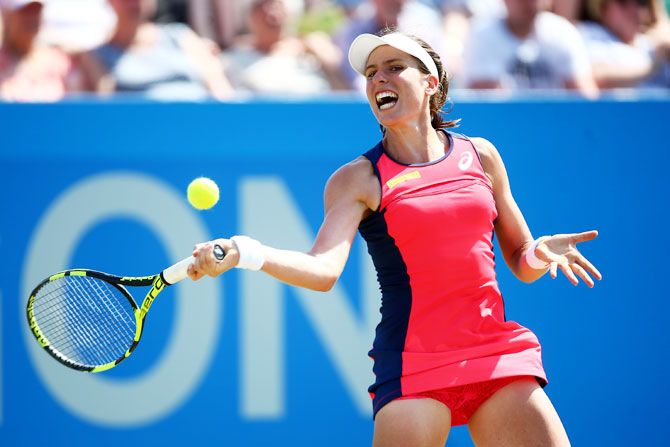 Top seed Johanna Konta reached the final of the Nottingham grass court tournament on Saturday with a 6-2, 7-5 win over Slovakia's Magdalena Rybarikova.

The British number one will play Croatian Donna Vekic, 7-6(5), 3-6, 7-6(4) victor over Czech Lucie Safarova in the day's second semi-final, in the climax to the Wimbledon warm-up tournament on Sunday.

Konta, who was born in Australia but took British citizenship five years ago, is aiming to become the first British woman to win a WTA event on home soil since Virginia Wade at Eastbourne in 1975. Wimbledon, which Wade won in 1977, is not part of the WTA Tour.

Having reached the top six in the world rankings last month, she is also optimistic about an improved performance at Wimbledon, where she won for the first time last year after four opening-round defeats.

Konta has yet to drop a set in the tournament and after she broke Rybarikova in the fifth game of the match, was always in control again.

The Slovakian showed resistance in a tighter second set but Konta broke again at 5-5 before going on to seal her place in a first Nottingham final after one hour 41 minutes.

The other semi-final was a tight tussle which lasted for 10 minutes under three hours and witnessed real heart from Vekic, who was reduced to tears of frustration by a tight line call that went against her in the final set but recovered her poise to prevail in the decisive tiebreak.

World number one Angelique Kerber has suffered a pre-Wimbledon injury scare, pulling out of this week's Aegon Classic at Edgbaston due to a recurrence of a hamstring problem.

The German is also unsure whether she will be able to play at Eastbourne next week due to problems with the left hamstring strain which forced her to retire during her third-round match in Madrid.

"It started slowly and then I really felt it yesterday (Saturday) evening. It is my left hamstring, the same one I had in Madrid," she told reporters.

Kerber had a disappointing clay court season and went out in the first round at the French Open. She said the injury flared up again when she returned to the courts last week.

"It was OK and I started practising again after Paris and then I felt it again in the last few days. I don’t want to risk anything now, to do something (worse)," she said.

Kerber is the latest big name to have pulled out of the Aegon Classic following Simona Halep's withdrawal with an ankle complaint.

Kerber is chasing an elusive first title this year after failing to get past the third round in her last five tournaments.

The 29-year-old has struggled to impose herself in recent months and her only appearance in a final this year was at the Abierto GNP Seguros competition at Monterrey in April, where she lost to Russian Anastasia Pavlyuchenkova.

The Eastbourne International tournament begins on June 25 with Wimbledon getting under way a week later.

Luxembourg's Gilles Muller out-aced the record-breaking Ivo Karlovic in a landmark battle of the big-serving veterans to lift the grasscourt title in Den Bosch on Sunday.

Croatia's 38-year-old Karlovic became the first man to ever pass the milestone of 12,000 aces as he blasted down another 19 yet he still could not stop his 34-year-old opponent coming out on top 7-6(5), 7-6(4) in the Wimbledon warm-up tournament.

With a combined age of 72, it was the oldest singles final on the ATP World Tour since Hong Kong in 1976 when 42-year-old Ken Rosewall defeated 30-year-old Ilie Nastase.

Earlier, Estonia's Anett Kontaveit, one of the rising talents of the WTA tour, won her first tour title in the women's final, beating Russian Natalia Vikhlyantseva 6-2, 6-3.

Muller, Luxembourg's best-ever player, has enjoyed a remarkable season, winning his second title of the year here after previously never having managed to earn one in 13 years of trying.

The left-hander even blasted 22 aces to outperform Karlovic, the most prolific purveyor of aces the game has ever seen, winning two tiebreaks after neither man had enjoyed even the sniff of a break point in the one hour 35 minute contest.

The 21-year-old Kontaveit, who had already reached one WTA final and beaten world number one Angelique Kerber this season, overcame a dip in concentration at the start of the second set to earn her victory in just under an hour and a quarter.

The 20-year-old Vikhlyantseva, another promising talent, was outplayed in the opening set but after breaking to take a 3-1 lead in the second, Kontaveit moved into overdrive to halt the comeback swiftly and win the next five games.

The victory will shoot the young prospect from Tallinn from world number 49 to a new career-high of 36 when the rankings are announced on Monday.

Big-serving world number 16 Lucas Pouille tuned up for Wimbledon by muscling past Spanish veteran Feliciano Lopez 4-6 7-6(5) 6-4 in just over two hours on Sunday to win the Stuttgart Open.

The 23-year-old, seeded fourth, fired a total of 29 aces on his way to his second title of the year following his victory in Budapest in April. He also reached the final in Marseille earlier this year.

The 35-year-old Lopez, who last reached a final in August 2016, was aiming for a sixth career title and third on grass when he broke early in the first set to race into the lead.

He then had a handful of opportunities to break again with the score at 1-1 and 2-2 in the second but Pouille held serve and eventually claimed the set on a tiebreak.

Pouille's patience paid off when a double fault and two unforced errors from Lopez gave the Frenchman his first break points midway through the third set. He took his chance at the first opportunity and then comfortably held serve.

Pouille who saved a matchpoint against Jan-Lennard Struff in the round of 16, squandered his first against Lopez with a double fault but made amends on his third with an ace.