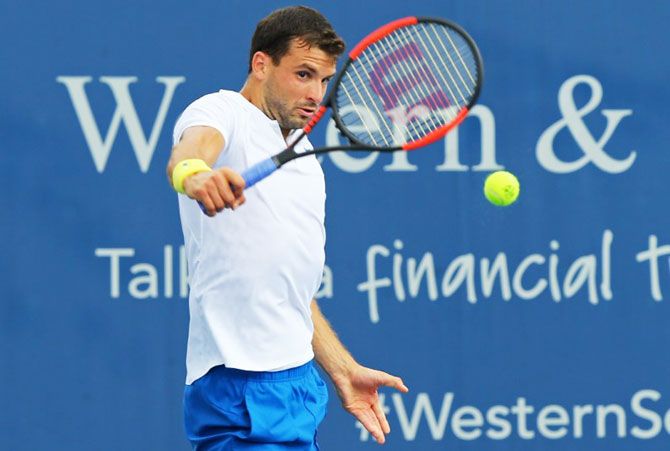 Grigor Dimitrov beat big-hitting Argentine Juan Martin del Potro for the first time in six career attempts to book a place in the last eight at the Cincinnati Open on Thursday.

The seventh-seeded Bulgarian advanced to his eighth ATP World Tour Masters 1000 quarter-final with a 6-3, 7-5 victory over Del Potro, who struggled with the intense heat in the closing stages of the one hour, 39 minute match.

Dimitrov will bid for a place in the semi-finals for the second straight year when he faces Japan's Yuichi Sugita, who reached his first Masters 1000 quarter-final.

The unseeded Sugita overcame Russian Karen Khachanov 6-7(0), 6-3, 6-3 before a thunderstorm forced play to be suspended for more than two hours.

In later games, John Isner never dropped a service game on his way to a 7-6(4) 7-5 win over fellow American Frances Tiafoe.

Isner rocketed two aces to close out the match and punch his card to the quarter-finals, where he will face another American in Jared Donaldson.

Donaldson, who defeated Nikoloz Basilashvili in straight sets on Thursday, will be one of four unseeded players in the quarters following a series of upsets early in the tournament.

Rain put a halt of Australian Nick Kyrgios's match against Ivo Karlovic with the Croatian leading 4-3 in the first set.

Halep has top spot in her sights with Cincinnati win 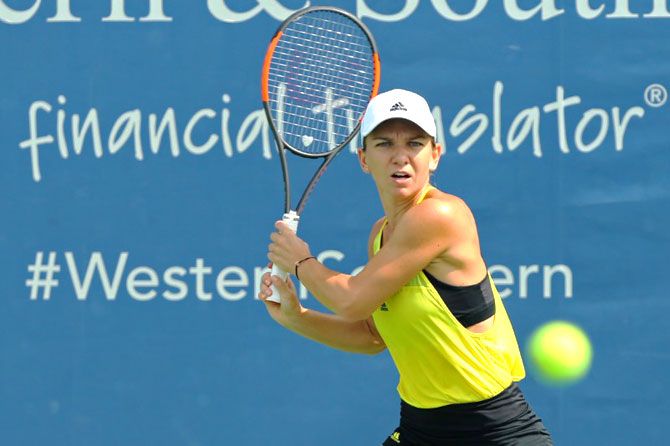 Romanian second seed Simona Halep stayed on track for a tilt at the world number one spot with a 6-4, 6-3 third-round win over Anastasija Sevastova at the Cincinnati Open on Thursday.

Halep reached the Cincinnati quarters for the fifth straight year, contesting the final in 2015 and the semi-finals last year in the hard court run-up to the US Open.

She can leapfrog Karolina Pliskova as world number one by winning the title, which the Czech won last year.

Pliskova led Camila Giorgi of Italy 3-0 in the first set before rain suspended the match.

Halep trailed 4-2 in the opening set against Latvia's 15th-seeded Sevastova, who was aiming to take a set off the Romanian for the first time in their last four meetings.

But Halep reeled off the last four games to take the set, helped by Sevastova's unforced errors on crucial points, and won the first three games of the second set on her way to victory.

"The match felt quite tough, it was not easy at all," said Halep, who will face Johanna Konta in the quarter-finals.

"I won against the 15th player in the world playing not as I want. It's a big thing, and I'm really happy about it." 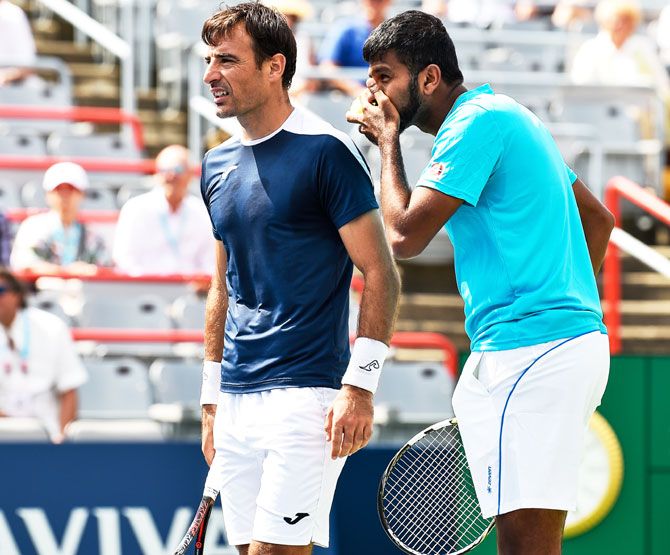 Rohan Bopanna and his Croatian partner Ivan Dodig reached the quarter-finals of the Cincinnati Masters after edging past Juan Sebastian Cabal and Fabio Fognini in a tight contest.

The seventh seeded Indo-Croatian pair rallied to humble the Colombian-Italian combo 5-7, 7-5, 10-8 in a second round match.

In the WTA event, being run simultaneously, Sania Mizra and Shuai Peng have reached the semi-finals with a 6-3, 6-7(1), 10-3 win over Irina-Camelia Begu and Raluca Olaru.

In their fiercely fought match, which lasted one hour and 41 minutes, Bopanna and Dodig broke their rivals once but also dropped serve one time.

To Cabal and Fognini's credit, they saved as many as seven breakpoints to make it as tough for Bopanna and Dodig as possible.

Bopanna is the only Indian left in the tournaments after Ramkumar Ramanathan's second round defeat in the singles and Leander Paes' first round defeat with Alexander Zverev in the doubles first round.

Victoria Azarenka could miss US Open due to custody battle 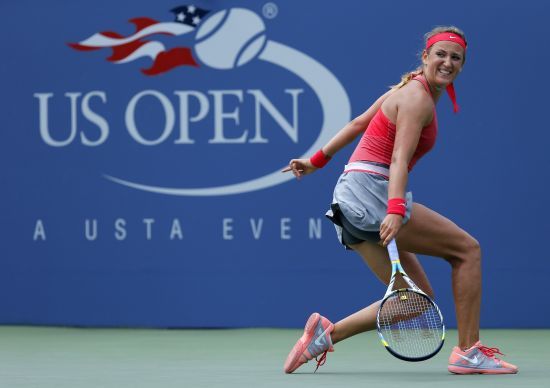 Two-time grand slam winner Victoria Azarenka said on Thursday she may withdraw from the US Open as she is unwilling to part with her son during legal proceedings to separate from her former partner.

Azarenka returned to action in June, after the birth of her son Leo last December, and reached the last 16 at the Mallorca Open in June and Wimbledon in July during her comeback.

The 28-year-old, who reached the finals at the US Open in 2012 and 2013, remains optimistic that legal arrangements can be worked out to allow her to compete shortly.

"The way things stand now is that the only way I can play in the US Open this year is if I leave Leo behind in California, which I'm not willing to do," the Belarusian said in a statement.

"Balancing child care and a career is not easy for any parent, but it is a challenge I am willing to face and embrace... No one should ever have to decide between a child and their career, we are strong enough to do both," she said.

"I look forward to hopefully having positive developments soon so that this difficult situation can be resolved and I can get back to competing."

The US Open, which is the fourth and final grand slam of the year, will be held from August 28-September 10 in New York City.