Indian tennis player Sumit Nagal on Friday said he was aiming to break into the top 100 of the ATP rankings and then look at being in the 80s in the quest for an Olympics spot.

"Like I said first it is the top 100 then look for the top 80 and look for the Olympics spot. I think it is around 80-85 to make it to the Olympics," he told reporters in Chennai on the sidelines of an event organised by Aspire High Performance Tennis Programme.

Nagal, who is currently ranked 130 in the ATP rankings, after having a good season during which he qualified for the US Open main draw and also took a set off the legendary Roger Federer, is presently training at the Aspire Foundation centre at IIT-Madras premises here ahead of the 2020 season.

The Indian made it to the semi-final or better of eight ATP Challengers this year, going through to the final twice and winning the title in Buenos Aires.

He had wins over former world no 17 Albert Ramos-Vinolas and former world no 24 Martin Klizan and made it to the main draw of an ATP 500 (at Hamburg) for the first time in his career.

Asked what Federer had told him after the match in New York, the 22-year-old Nagal said he (Federer) didn't say much but did say nice things (about him) in the media.

"That day he didn't say much. He wished me the best. I heard him, he said nice things about me in the media," he added.

After a good year during which he jumped to 130 after being ranked 340 at the end of 2018, Nagal, said the biggest factor this season was staying injury-free and having new issues with his body.

"The biggest factor this season was staying injury-free. In my last 4-5 years, every year I have played seven to eight months. For the first time in the last five years, I had played without getting injured. I tore my ankle in the summer. Other than that body has been fine. No new injuries or no big issues with my body," he added.

Nagal said he would look to play more ATP Tour events this year but for that he would have to first improve his rankings.

Asked what was the reason behind him training in Chennai, the reason was the sultry conditions which is pretty similar to Melbourne in January where he would play Australian Open qualifiers.

"It is because it is half way to Australia. Plus the weather is nice and warm... something we are looking at before Melbourne."

"Across India there is a lot of talent, but there is lack of expertise when it comes to coaching and proper guidance which prevents them from doing well at the international level," Bhupathi said at an Aspire High Performance Tennis Programme here.

"I have seen this journey play out over the years. There's never been any doubt in anyone's mind about it."

He recalled that there were several players who were in top five in the rankings at junior level in the 1990s, but could not go on to do bigger things because they were not able to get proper guidance.

The 45-year-old Bhupathi also said that Chennai has always been a hotbed for tennis with stalwart families like the Krishnans and Amritrajs.

Heaping praise on Sumit Nagal, who has risen to 130 in the ATP rankings on the back of an impressive 2019 and qualifying for the US Open main draw where he lost to the legendary Roger Federer, Bhupathi said everyone was excited because he took a set (off Federer).

"My journey stared with Sumit when he was 10 or 11. He has improved a lot. As Somdev (Devvarman) said we are all excited after his taking a set off Roger Federer. We will remember him for more than that," Bhupathi said.

Asked about the controversy surrounding his exit as non-playing captain of the Davis Cup team, he said he had not heard from the AITA.

"I haven't actually got any word (on him getting removed as non-playing captain). I was just told the day before they announced Rohit (Rajpal) that they would pick him, because I wasn't comfortable going to Islamabad and he is. That's all I've heard so far," he said.

"I think the Olympics gets sensationalised, and honestly this year there's nothing exciting to look forward to the Olympics. Nobody has qualified yet. So, Olympics is not really relevant till Rohan (Bopanna), and Divij (Sharan), or whoever the doubles team is, actually qualifies," he added. 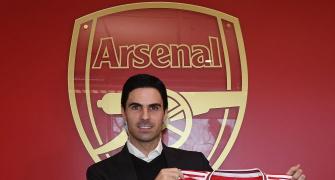 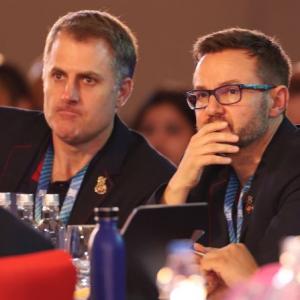