Davis Cup: Yuki, Vishnu to play on day one

Vishnu Vardhan will play on all three days, taking on Kiwi number one Jose Statham in the second singles on day one before playing the doubles on Saturday, followed by the reverse singles on Sunday, according to India's non-playing captain S P Misra.

On day two, Vishnu will combine with Divij Sharan against the Kiwi pair of Michael Venus and Artem Sitak, while on the last day of the tie, Yuki will play Statham in the fourth rubber and Vishnu will face Daniel in the second reverse singles.

But if India could seal the fate on the first two days itself, then local lad Sanam Singh will certainly be playing on the last day in place of Vishnu.\ 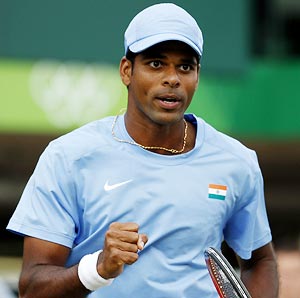 Misra said he wants to keep Sanam fresh for the last day in case the fifth rubber becomes decisive.

"I am happy with the draw. Sanam won't play in all the three matches. It's important that we keep fresh legs for last day," he said after the draw.

Sanam said he is not disappointed at missing out on the action on day one.

"No, not at all. Each one of us is backing each other. I will support Yuki and Vishnu," he said.

Yuki said the first match will be tough.

"I am glad that I will be playing first. It's gonna be tough but hoping to pull it off."

Divij, whose game has improved immensely in the last 12 months, said he is excited to make his Davis Cup debut in a home tie.

"I am very excited. I have been watching Davis Cup since my childhood. I am looking forward to it. I will do my best."

Asked what has changed in that past one year that has made him perform so consistently, Divij said, "It's a process.  I have been focussing on just doubles now. Earlier, I was playing both singles and doubles."

Meanwhile, New Zealand captain Marcel Vos said it will be a test for his players to do well in India.

"We have practiced in the last three-four days. The conditions are challenging but we will play our best tennis," he insisted.

Turner said though he had not played Yuki before, he is looking forward to give his side a good start.