Indian chess ace Viswanathan Anand played out his second draw in three games, signing peace with Anish Giri of Holland in the third round of the Tata Steel Masters, in Wijk Aan Zee, The Netherlands, on Tuesday.

It was a surprising decision by Anand to agree to a draw proposed by Giri, who was in a rather better position with white pieces.

It was a king pawn opening by Anand leading to a Berlin defense by Giri. Anand faced a new idea as early as on move nine and pounced on his opportunity to get a fine position by the 12th move.

While Anand had central control and finely deployed forces exerting pressure, Giri was saddled with a passive position looking at a difficult defense. 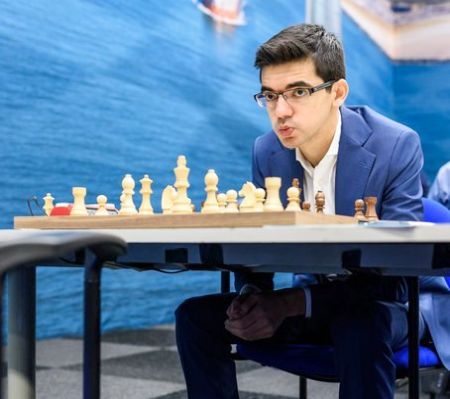 It was on move 21 that Giri thought he was out of trouble and proposed a draw.

"I didn't offer for him to agree; I offered a draw to change sort of the course of the game a little bit. I thought I was surviving the position already but I was feeling way too uncomfortable and I spent way too much time," Giri explained the reasoning behind his draw offer after the game.

Anand thought for some time before eventually accepting the offer.

Playing under FIDE flag, Alireza Firouzja scored his second victory in the tournament cruising past Vladislav Artemiev of Russia.

The Iranian who is no longer representing his native country was a class act in a Caro Kann defense game as white giving little respite to Artemiev throughout the game.

Firouzja shot in to sole lead on 2.5 points out of a possible three and is now followed by Jorden Van Foreest of Holland and American trio of Fabiano Caruana, Wesley So and Jeffery Xiong who all have two points each.

With ten rounds still to come in the 14-players round-robin tournament, world champion Magnus Carlsen is sharing the sixth spot on 1.5 points while Anand is sharing the 11th spot with just one point from three games.

In the challengers' section being organised simultaneously, Surya Shekhar Ganguly remained in joint lead on two points after drawing with young Uzbek Nodirbek Abdusattarov. The other Indian in the competition, Nihal Sareen played his third draw in the event with Anton Smirnov of Australia.