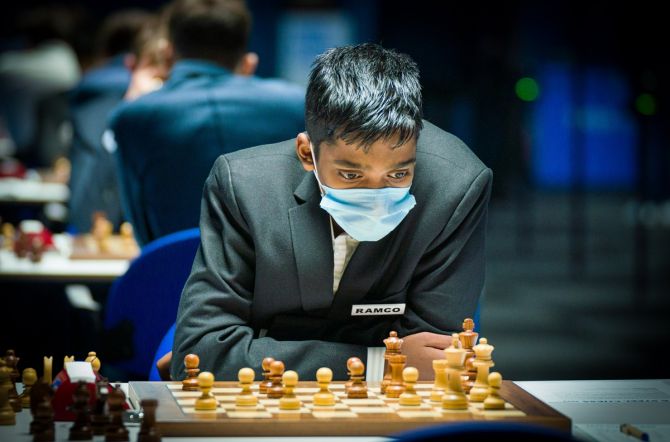 Indian Grandmaster Vidit Santhosh Gujrathi settled for a draw against Russia's Andrey Esipenko in the fourth round to stay in the lead with three points in the prestigious Tata Steel Masters chess tournament in Wijk Aan Zee.

Grandmaster R Praggnanandhaa, meanwhile, bounced back after a defeat in the third round and scored his first victory of the tournament, beating Nils Grandelius of Sweden late on Tuesday to take his tally to 2 points.

Praggnanandha won a fine positional game in Gruenfeld Defence against Grandelius. After an instructive exchange of his dark-squared bishop for a knight in a closed position, the Indian seamlessly executed a classical plan of playing against the opponent's so-called bad bishop and pulled out a well-deserved victory in a rook endgame.

Gujrathi and Esipenko tested a popular line of the Italian Opening in which the Russian GM steadily held his ground with Black. Esipenko even emerged a pawn up, but White had sufficient counterplay. Probably satisfied with a half-point, Esipenko chose not to ask further questions and opted for a draw.

Azerbaijan GM Shakhriyar Mamedyarov also notched up his first win, outfoxing Jan-Krzysztof Duda of Poland in endgame complications. All other games were drawn.

Magnus Carlsen and Jorden Van Foreest played an exciting game in which the world champion missed a chance to catch up with the leader. The Dutchman did not shy away from complications in a stonewall type position as he boldly sacrificed a pawn and later on another for an active play on the kingside. A draw was agreed on the 54th move.

In the Challengers event being held simultaneously, Indian GM Arjun Erigaisi is on top following a win over Roven Vogel in the fourth round. He is followed by two players on three points while another Indian Grandmaster Surya Shekhar Ganguly has 2.5 points after he drew Daniel Dardha in his round four match.