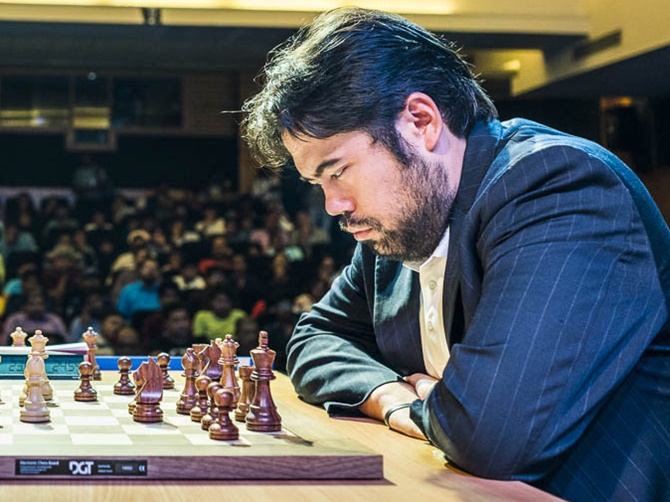 India's Pentala Harikrishna secured two wins on the last day but could only finish second, half a point behind Japanese-American wizard Hikaru Nakamura who lived up to his top billing to clinch the Tata Steel Chess India Rapid tournament, in Kolkata, on Sunday.

There was heartbreak for reigning world rapid champion Viswanathan Anand who lost to local challenger and his former second Surya Sekhar Ganguly in the final round to finish seventh with eight draws and one loss.
Indian prodigy Nihal Sarin had a creditable draw against the five-time former world champion Anand and finished ninth with three points -- six draws and three losses.

"It was my first super tournament and I think the result is not bad with six draws from nine games," Sarin, the soft-spoken 14-year-old from Thrissur, said.

Facing Anand for the first time in a tournament, Ganguly opted for the solid Caro-Kann defence against the King pawn opening.

But, the game took an aggressive turn when Ganguly went for the initiative and started to risk and advance his own pawns against Anand's kingside.

The game was fairly in the balance before, two consecutive mistakes on the 26th and 27th move by Anand gave Ganguly a huge initiative.

The attack and the initiative was too strong and Anand stretched out his hand in resignation on the 37th move.

"Let's get it straight -- I attacked Anand all out as I was strategically busted. There was no other option. It was very special that I was playing Anand for the first time. I was enjoying the moment and the entire game," Ganguly said after his solitary win of the tournament.

"It feels good that finally I didn't spoil an advantage. In this tournament, number of times I was in a good position but could not capitalise. It was getting a bit frustrating," Ganguly said.

Having won three on the trot on Saturday, Nakamura drew all his three rounds on the final day to finish undefeated with six points from a maximum nine and seal the issue in the India's first super tournament.

Nakamura, who is world number two in rapid and three in blitz, credited the win to his online chess game that he was playing with B Adhiban.

"It certainly gave me a lot of confidence for this tournament," he said adding that his fourth round win over Shakhriyar Mamedyarov was the turning point.

Harikrishna defeated overnight leader Leovon Aronian of Armenia in the penultimate round before outwitting India number 3 Vidit Gujrathi with the Black pieces of the Catalan defence in the final round.

But this was not enough as his seventh round loss to Sergey Karjakin of Russia proved to be the difference. He finished with 5.5 points to settle for the second place.

Karjakin defeated Hari krishna with the white pieces in an Anti-Berlin opening.

Hari's 14th move, pawn to f5 was questionable and it cost him a move. Hari hung on and defended stoutly but the pressure paid off and Karjakin was victorious in the end.

In another match, Sarin, playing white, opted to play safe and went for Catalan opening. Anand also played it safe thinking that the inexperienced Sarin would blunder at some point of time.

Anand did not know Sarin's style of rapid chess and was taken aback when Sarin played the endgame.

Finally after a series of exchanges, Sarin had a rook and bishop against Anand's rook and knight.

Anand used his vast experience and defensive skill to salvage a draw in 51 moves with great effort by sacrificing his knight.