Five times winner Viswanathan Anand had to be content with a second place finish following a draw with Ian Nepomniachtchi of Russia in the 13th and final round of 73rd Tata Steel Chess in Wijk Aan Zee, The Netherlands.

The World Champion could draw a big consolation from the fact that he would be the number one ranked player all over again as the results here proved that he will be overtaking world number one Magnus Carlsen of Norway in the next rating list.

Hikaru Nakamura of United States owns the title after drawing his final round game with Wang hao of China.

For the record, Nakamura tallied 9 points in all, half a point more than Anand in this category-20 super tournament played between 14-players. 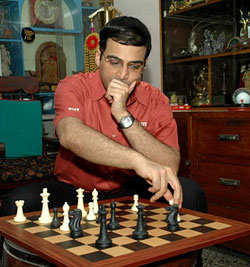 The American not only performed way beyond his rating of 2751 but also finished ahead of the world's top four ranked players.

Anand got the better position with his black pieces but could not find a breakthrough AS Nepomniachtchi simply got an impregnable position in the endgame arising out of a Sicilian defense game.

The Indian ace settled for a draw in 37 moves.

"Disappointing," Anand said after the final results were out.

"When I reached a plus-four score (four wins and rest draws), I felt I was well on my way to a final victory but Hikaru just kept winning, picking up six points in a row, which was quite amazing.

"But I'm not unhappy; it's difficult to be unhappy with a plus-four score. It's a pity I didn't manage to win the tournament but I think I performed above my rating, which isn't bad at all," the World Champion said.

The third place was shared by Magnus Carlsen and Levon Aronian of Armenia who both scored 8 points apiece. The last round of the tournament turned out to be a damp squib with all the games ending in draws for the first time in the event this year.

In Group 'B' Surya Shekhar Ganguly finished with 5.5 points after drawing quickly with Vietnam's Le Quang Liem. England's Luke McShane and Czech Republic's David Navara tied for the title at 8.5 points and the former won the title on better tiebreak qualifying for the 'A' group of 2012.

Tania Sachdev started out as the lowest ranked player in group 'C' but her performance was way above expectation.

The Indian finished with 6.5 points in all to finish joint sixth after losing to Germany's Sebastian Siebrecht in her final round game. Italy's Daniele Vocaturo won the title and a promotion to the next year's 'B' group with 9 points after drawing with main rival Illya Nyzhnyk of Ukraine.