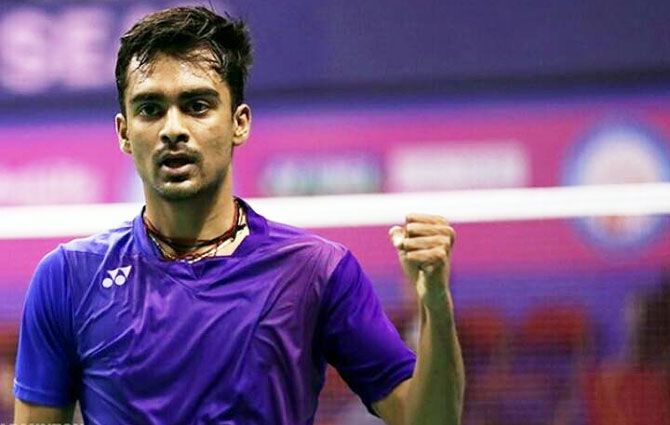 National champion Sameer Verma stunned World No. 3 Jan O Jorgensen of Denmark to reach his maiden Super Series final while Olympic silver medallist P V Sindhu made it to her second successive summit clash in the women's singles event at the Hong Kong Open, in Kowloon on Saturday.

It was double bonanza for India at the Hong Kong Open, the last Super Series tournament of the season, as Sameer and Sindhu dished out some superb performances to make it a super Sunday for badminton fans on Sunday.

The 22-year-old Sameer showed tremendous athleticism and accuracy in his strokes to notch up a hard-fought 21-19, 24-22 win over Denmark's Jorgensen, who had clinched the prestigious China Super Series Premier last week.

Sameer, who came into the tournament as a qualifier, will fight for the title against local favourite Ng Ka Long Angus.

More than 40 ranking points separated World No. 43 Sameer from Jorgensen but all that didn't matter on the day as the Indian retrieved everything thrown at him by the Dane in the 46-minute fast-paced battle.

In one of the finest wins of his career, Sameer punched way above his weight as he opened up a massive 12-7 lead early on in the opening game. However, Jorgensen ensured he was not far behind as he clawed back to reduce the margin to 10-11 at the interval.

Jorgensen made Sameer run across the court but the young Indian was up for it most times and matched the Dane stroke for stroke to be 17-17.

Sameer marched ahead after that and grabbed three game points when the Dane hit the net.

A gruelling rally ensued with Jorgensen relying on his wristy returns and soft net play to save two points. Sameer finally pocketed the first game after winning a video referral when Jorgensen hit long.

In the second game, Jorgensen started on an aggressive note, opening up a healthy 11-5 lead at the interval. But a gritty Sameer fought back to draw level at 12-12 and then took a slender 13-12 lead.

The experienced Jorgensen soon broke off and eked out a 17-14 lead first and then grabbed a 20-17 lead.

Sameer then showed his class as he engaged in some brilliant rallies and pushed the Dane into committing too many unforced errors to help the Indian save three game points and take a 21-20 lead.

With pressure mounting, it was all about holding one's nerves and Sameer faltered twice as he hit wide to hand back the lead to Dane. But in the end, the young Indian kept his calm to prevail in the 24-minute game after the Dane failed to return a shot and hit the net. An overwhelmed Sameer sunk down on his knees in celebration.

It's a big win for Sameer, whose career has been plagued by a series of injuries. In 2012, he had injured his back and after recovering, he again hurt his back in 2013. Despite putting all the hard work to recover, he was laid low as had an Appendicitis in 2014.

Sameer has a 2-1 record against Ng Ka Long, having beaten him the last time at the Asia Youth Under-19 Championship in 2012.

"I didn't think too much before the match. I tried to make him run around the court. I didn't expect to do so well. My idol is Lin Dan, he's a legend," Sameer said.

"I haven't thought of tomorrow's final. I called my coach (Gopi) yesterday and he told me to just keep calm. I didn't talk to any of my teammates who had beaten Jorgensen earlier. I was under pressure at the end of the second game and I was prepared for a third," he added.

In the women's singles, Sindhu, however, hardly broke any sweat as she defeated beat Cheung, an opponent she had beaten twice in the past at the 2014 Badminton Asia Championships and 2013 Malaysia Grand Prix Gold.

After the Hong Kong shuttler took a slender 4-2 lead early on, Sindhu slowly clawed back and broke off at 8-8 to never allow Cheung to threaten her chances. Eventually from a 16-14 lead, Sindhu reeled off five points to pocket the first game.

In the second, the Indian managed a 7-3 lead and even though Cheung clawed back immediately, Sindhu surged to a 10-7 advantage and then slowly crafted her way to shut the doors on her World No. 26 opponent.

Sindhu will have to be little cautious against Tai Tzu, who holds a 4-3 head-to-head record against the Indian. Sindhu will look back at her Olympic performance when she had beaten the Taiwan girl on August 15 at Rio.

"I finished it easily in two games. I was prepared for everything. I was ready from the first point. She had good support from the home crowd. Even though I led, I didn't take it easy," Sindhu said.

"Happy about two finals in two weeks. Hopefully will give my best, let's see if there will be a repeat of last week's result."

On Sameer's stunning win, Sindhu said: "I was following it. He was down and he took it out. Huge achievement for him beating top player Jan and entering a final for the first time. Two Indians tomorrow, so I hope it will be a good day."

It is a rare occasion when two Indians have reached the finals of the men's and women's singles competition of any particular tournament.

For the record, Saina Nehwal and K Srikanth had made the finals at 2014 China Open and 2015 India Open and both had emerged victorious.