IMAGE: Nick Foles #9 of the Philadelphia Eagles celebrates with his daughter Lily Foles after his tean's 41-33 victory over the New England Patriots in Super Bowl LII final at US Bank Stadium in Minneapolis, Minnesota on Sunday. Photograph: Streeter Lecka/Getty Images

For a city that produced one of Hollywood's ultimate underdog stories, the Philadelphia Eagles delivered an equally inspiring script by upsetting the New England Patriots on Sunday for their first Super Bowl title.

The Eagles were underdogs throughout the NFL playoffs, and just as most expected little from fictional Philadelphia boxer Rocky Balboa, few onlookers outside the City of Brotherly Love expected them to beat the defending Super Bowl champions.

But Philadelphia, who embraced their underdog status with some players wearing dog masks throughout the playoffs, stunned New England with a 41-33 victory to cap a remarkable turnaround after finishing last in their division a year ago.

"We've been doubted since Day One," said Eagles tight end Zach Ertz, who caught what proved to be the game-winning touchdown. 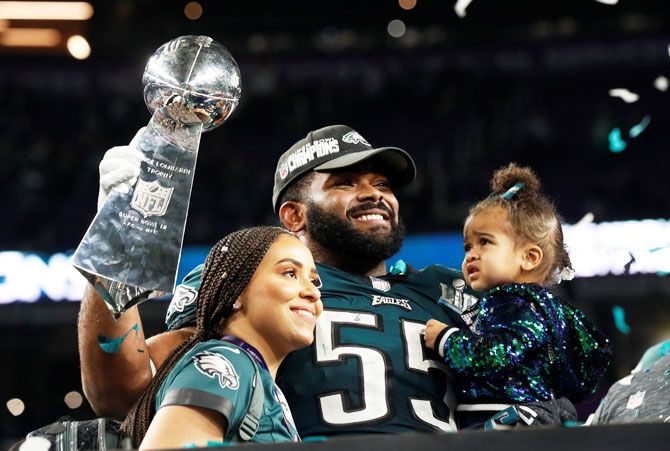 "This team, no one picked us. We come out here and we're World Champions."

The victory set off a wild celebration among the team's many green-clad supporters who made the trek to chilly Minneapolis while uplifting music from "Rocky" blared through the speakers above a field covered in silver and green confetti.

The Eagles limped into the NFL's postseason with an offence handicapped by a seemingly hopeless backup quarterback following an injury to Carson Wentz in December but Nick Foles proved more than ready to shine on the game's brightest stage.

Foles, who nearly retired after an unfulfilling 2015 season with the St. Louis Rams, showed no nerves playing in his first Super Bowl and went toe-to-toe with Patriots counterpart Tom Brady, a five-time Super Bowl champion. 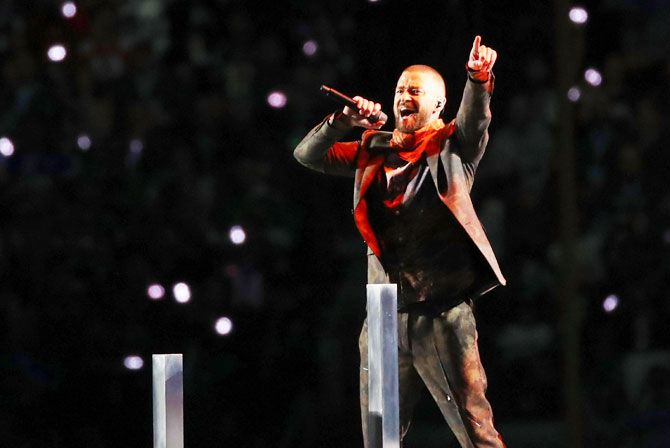 "I felt calm," said Foles, who was named the game's Most Valuable Player after throwing three touchdowns. "We felt confident coming in and we just went out there and played football."

The Eagles, who won three championships in the pre-Super Bowl era, had long been a tormented franchise and lost in their only two previous Super Bowl appearances, including to the Patriots in 2005, but dug deep to deliver a championship to fans in their unwavering city.

Trailing by a point late in the fourth quarter, the Eagles moved ahead for good when Foles connected with Ertz on a 11-yard touchdown that held up after a review determined the catch was good to put his team ahead 38-33.

Philadelphia missed a subsequent two-point conversion attempt to leave the door open for the Patriots with a little less than two-and-a-half minutes to play. 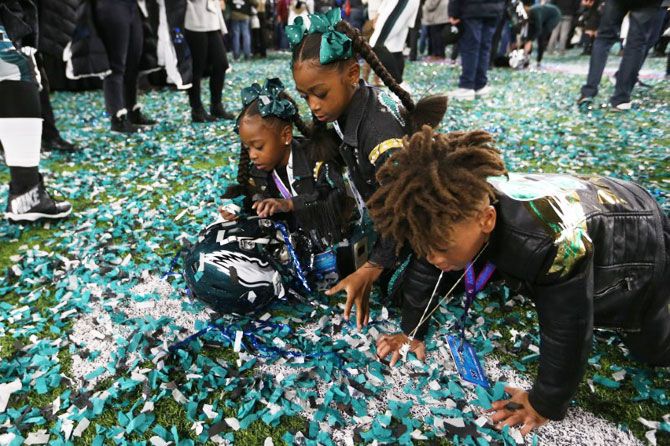 But in a game when both offences moved up and down the field effortlessly and combined for a Super Bowl record 1,151 yards, Brady had the ball swatted from his grasp and it was recovered by Philadelphia to all but seal the Patriots' fate.

The Eagles went on to kick a field goal to extend their lead to eight points and denied the Patriots from engineering a last-minute, game-tying drive.

Up 15-6, the Eagles had a chance to build a comfortable lead towards the end of the first half but intended receiver Alshon Jeffrey deflected a Foles pass that was intercepted by Patriots defensive back Duron Harmon steps from the end zone. 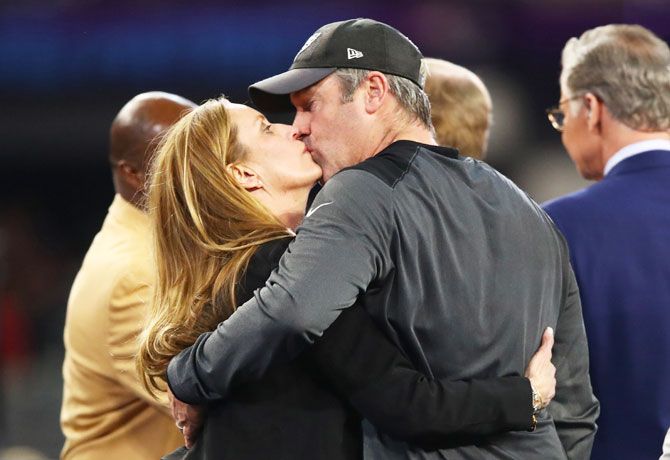 The turnover proved costly as the Patriots marched 90 yards back down the field in less than three minutes, in a drive that was capped by a James White touchdown to pull within 15-12.

However, the Eagles replied with an impressive drive of their own that resulted in a touchdown on a gutsy trick play on fourth down from the Patriots one-yard line.

The Eagles, opting not to kick a field goal, snapped the ball to rookie running back Corey Clement, who flipped the ball to tight end Trey Burton, who then threw to a wide-open Foles for a walk-in touchdown and a 22-12 halftime lead. 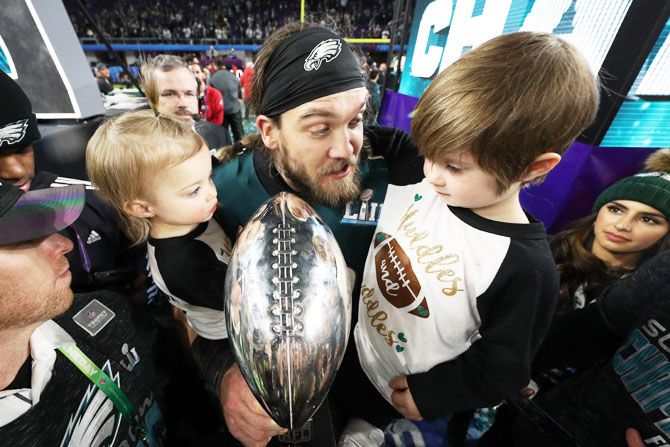 It marked the end of a wild opening half that included missed extra points, a missed field goal and a botched Patriots attempt at a trick play of their own when a wide-open Brady dropped an intended pass.

The Patriots looked poised to collect a record-tying sixth Super Bowl in 17 seasons when Brady threw his third touchdown - this one a short pass to Rob Gronkowski with about nine minutes to play - to give his team their first lead of the game, 33-32.

But the Patriots had no answer for the Foles-led Eagles, who refused to lie down at the hands of a team that was looking to add to their remarkable dynasty. 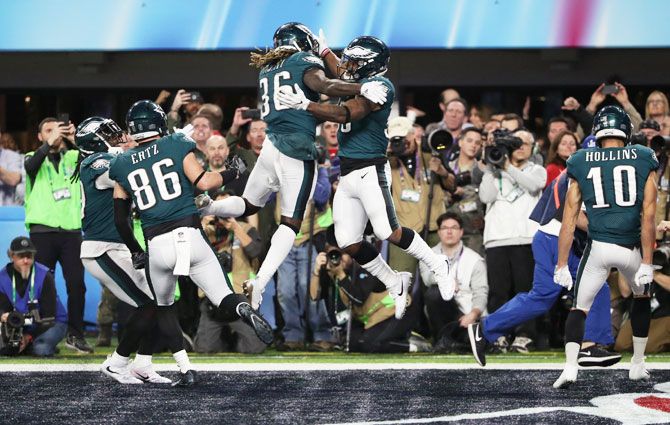 Patriots coach Bill Belichick took the blame for the loss while Gronkowski, who was playing in his first game since suffering a concussion two weeks ago, said he knew his team were going to be in for a battle.

"Unfortunately, we just didn't come up with the most opportunities to make to win the game."

Brady finished the game with 505 passing yards and three touchdowns but could not deliver when it mattered most, his desperate pass falling to the ground in the end zone as time expired. 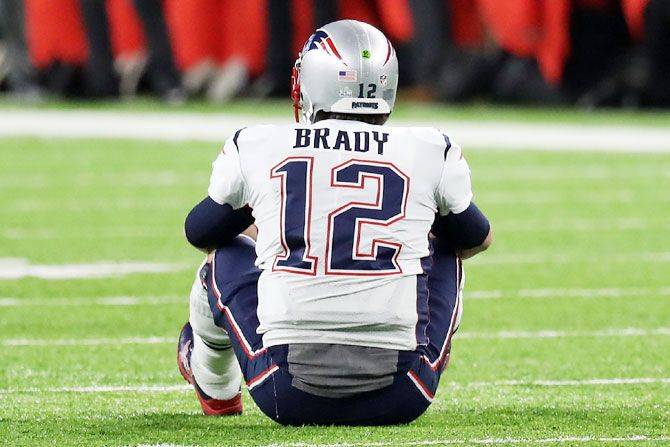 IMAGE: Tom Brady #12 of the New England Patriots reacts after fumbling the ball during the fourth quarter against the Philadelphia Eagles in Super Bowl LII final at US Bank Stadium on Sunday. Photograph: Rob Carr/Getty Images

The Patriots now enter an offseason some feel could mark the beginning of the end for their dynasty after ESPN reported in January about a rift between Brady, Belichick and owner Robert Kraft.

The trio have denied reports of any off-field tension but there will be no shortage of attention paid to their every move between now and next season.

The game, played under a translucent U.S. Bank Stadium roof while temperatures outside plummeted, capped a season during which NFL ratings dropped after many players kneeled during the national anthem to protest racial inequality and as the league's concussion protocol entered the spotlight. 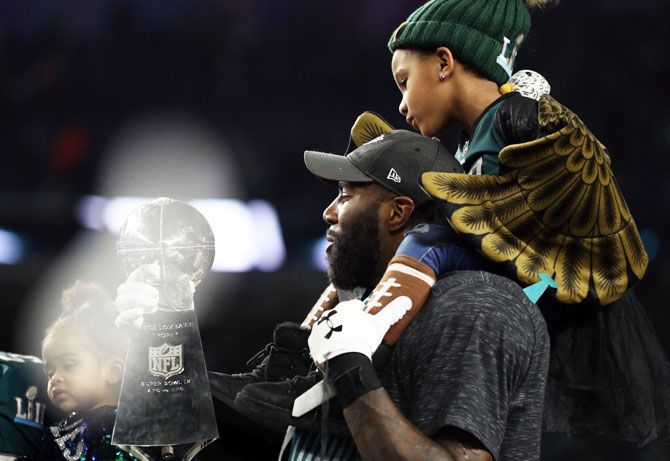 But no players protested while Grammy Award-winning pop singer Pink performed "The Star-Spangled Banner" ahead of the year's most-watched US television broadcast, attracting an audience of more than 100 million people.

Later, the three-time Grammy winner hit back at the people who criticised her National Anthem Performance at the beginning of the 2018 Super Bowl.

A Twitter user tweeted, "If I've said it once, I've said it 1000 times. Pink sucks and if you like her singing you're dumb #SuperBowl" to which the singer replied, "Yeah but [at least] I suck while singing our countries national anthem, and you just suck by yourself on a dirty couch(sic)." 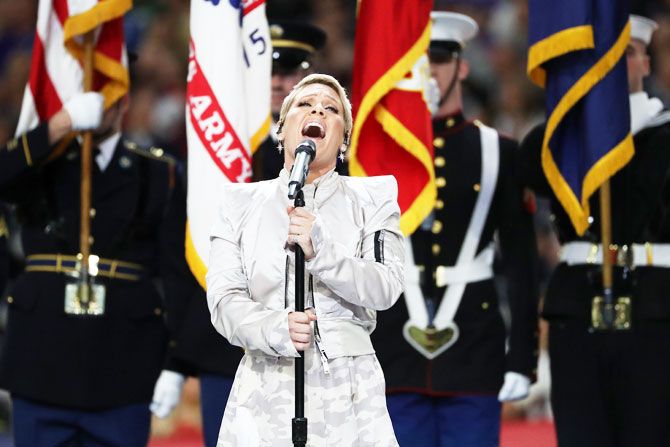 The 38-year-old, who performed while battling the flu, was also criticised for spitting out what appeared to be gum during her performance.

"It was a throat lozenge," she tweeted, defending herself.

Pink wrote on Instagram the day before the Super Bowl that she had the flu, but didn't want to miss the opportunity to perform in front of her family, military family, the Eagles and the world. "Trying to practice the flu away," she wrote.

"I've been waiting to sing this song since 1991 when I saw my idol, Whitney Houston, own this song."