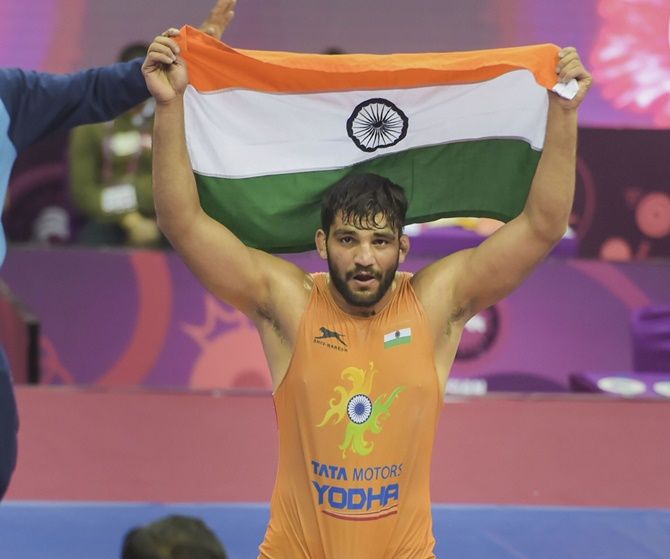 IMAGE: India’s Sunil Kumar celebrates with the tricolour after defeating Azat Salidinov of Kyrgyzstan in the 87 kg Greco-Roman final at the Asian Wrestling Championships, in New Delhi, on Tuesday. Photograph: PTI

Sunil Kumar proved too good for Azat Salidinov of Kyrgyzstan, winning 5-0, in the 87 kg final to win India's first Greco-Roman gold medal in the Asian Wrestling Championships in 27 years.

Entering the gold medal bout after a come-from-behind victory in the semi-finals, Kumar comprehensively defeated his opponent in the final at the K D Jadhav Indoor Stadium, in Delhi, on Tuesday.

Earlier, in the semi-finals, Kumar was down 1-8 against his Kazakh opponent Azamat Kustubayev but staged a great comeback, grabbing 11 points on the trot to win the bout 12-8.

In 2019 Kumar made it to the final but ended up with a silver medal.

Another Indian Arjun Halakurki won a bronze in Greco-Roman 55kg, his first medal at his first senior international event.

Arjun was leading 7-1 against Iran's Naserpour but lost 7-8 in the semi-final.