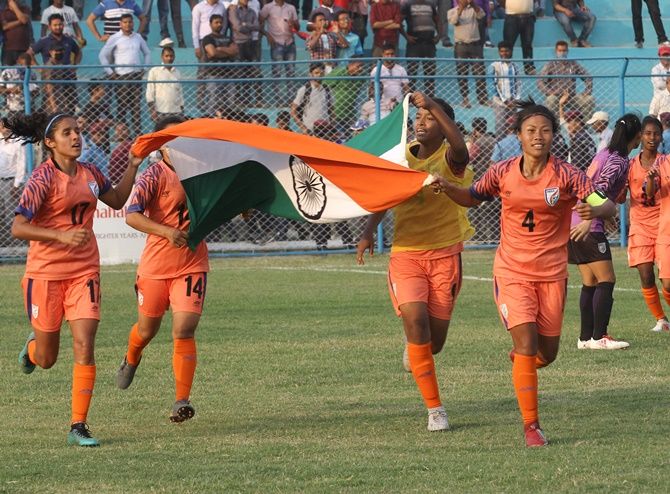 Indian football talisman Sunil Chhetri has advised the national women's team players to look into 'every small aspect' of their game while preparing for the 2022 Asian Cup which the country is hosting.

Last month, the Asian Football Confederation confirmed that India will host the women's continental showpiece event in 2022. The exact dates and venues are yet to be announced.

"It is an amazing opportunity that they (the players) have -- to play in such a high-level tournament, against some top opposition from Asia. These are the levels where you want to be," Chhetri was quoted as saying in a release issued by the All India Football Federation.

"I'd like to urge all of them to start preparing for the tournament from now on itself. Look into every small aspect of your game and try to improve it – your touch, speed, saving ability, shooting, burning those extra body fats – the process needs to start from right now."

He said the last thing a player wants is to be overcome by a sense of regret once she starts playing the tournament because of lack of preparation.

Chhetri, who is is the lone player in the country to have played in two Asian Cup, said the players should enjoy the tournament once they have prepared well for it.

"Once you have taken every step and prepared yourself in every manner possible, make sure that you enjoy the tournament once you start playing it. It's not every day that you play on the continental stage, and it is important for you to enjoy the moment," said the 35-year-old star striker.

"The pressure will always be there but it's important to enjoy it because football is all about being happy. I'd be more than happy to watch you all from the stands, once the tournament starts."

"The plan is already there to reach the level. We'll also play in the Qualifiers. On behalf of the team I would like to thank Sunil for all his support. We will give it our all. Everyone is looking forward to it," she said.