India started their campaign in The Sultan of Johor Cup Under-21 hockey tournament on a perfect note, defeating England 2-1 in their opening round-robin match in Johor Bahru, Malaysia on Sunday.

The Indians scored a goal each -- both field efforts -- in each half to pocket full three points from the encounter.

Ramandeep Singh gave India the lead in the 18th minute before Talwinder Singh doubled the lead for his side in the 50th minute. 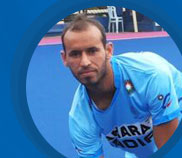 Sam French pulled one back for the Englishmen, converting a penalty corner in the 67th minute.

Despite the victory, the Indians looked far from convincing in the match and did just enough to secure the victory.

The Indians got four penalty corners in the match but failed to convert a single one. England were no better as they utilised just one of the six short corners that came their way.

The Indians should also thank their custodian Harjot Singh, who made a couple of great saves to keep a clean slate for his side till the 67th minute.

"We failed to capitalise on the chances we created but all credit to England who stayed in the game and gave us a tough time," India coach Gregg Clark said.

"It is a question of getting things right and this being our first match it was a decent performance as we really should have not been caught in possesion as many times as we did," he said

"Still I am happy with the three points and a winning start is always welcomed. But we can improve," the South African added.

India will play Argentina in their next round robin match on Monday.