VfB Stuttgart have fined Romanian Ciprian Marica a reported 50,000 euros after he was sent off following a verbal attack on the referee in his team's 4-2 defeat by Hamburg SV on Saturday.

The club confirmed they had fined the forward but did not reveal the amount although Stuttgart newspapers reported it was 50,000 euros, a record for the club.

"With his behaviour he not only damaged himself but also the club," said team manager Fredi Bobic.

"He had a good run, had set up goals and scored important ones in the past weeks but to take a step back with his stupid behaviour is very disappointing," he added.

Romania international Marica had scored in the ninth minute to make it 1-1 but was sent off seven minutes later after protesting over a refereeing decision and allegedly swearing at the official.

The club also fined Zdravko Kuzmanovic after the Serb refused to approach Stuttgart fans in the stands after the game to thank them.

"In our situation there is no place for selfish behaviour, neither on the pitch nor off it," said Bobic.

The defeat left Stuttgart one spot off the bottom, on 11 points from 14 games, one more than last-placed Borussia Moenchengladbach.

© Copyright 2021 Reuters Limited. All rights reserved. Republication or redistribution of Reuters content, including by framing or similar means, is expressly prohibited without the prior written consent of Reuters. Reuters shall not be liable for any errors or delays in the content, or for any actions taken in reliance thereon.
Related News: VfB Stuttgart, Ciprian Marica, Fredi Bobic, Zdravko Kuzmanovic, Borussia Moenchengladbach
SHARE THIS STORYCOMMENT
Print this article 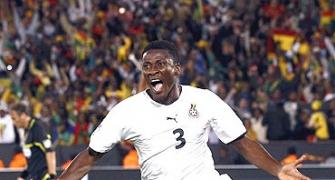