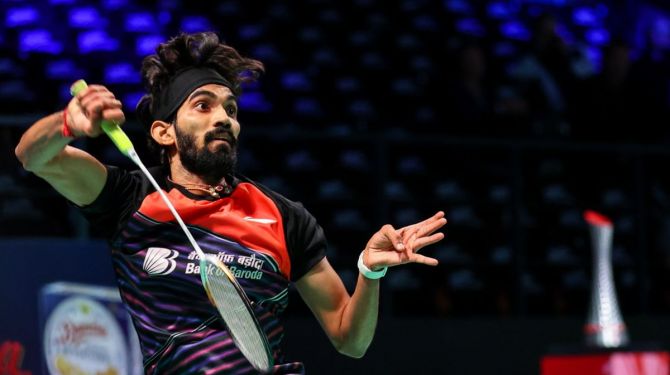 The fifth seeded Indian took 33 minutes to get the better of his Canadian opponent 21-15, 21-14 in the men's singles second round of the US$750,000 Super 750 tournament, the only world tour event happening this year in a calendar thrown haywire by the COVID-19 pandemic.

The BWF was forced to cancel multiple tournaments and postpone the Asia leg and the World Tour Final to January next year due to the pandemic.

"It was close until 11 in both games. I'm just happy that I could continue that form throughout the match. I had to be alert to get back his shots," Srikanth told BWF.

The 27-year-old is likely to face World No.2 Chou Tien Chen of Chinese Taipei, who meets Ireland's Nhat Nguyen later in the day.

Talking about Chou Tien Chen, Srikanth said: "He's been playing well the last few years. It's definitely a match where I can understand where I'm at. That's the whole idea of playing this tournament.

"He hits hard, he's someone who has an overall game, he has a hard smash, he knows when to attack and when to defend. He has matured. It's always good when you play a top 4 player."

In the opening game, Srikanth zoomed to a 9-4 lead before grabbing a three-point advantage at the break.

The Indian then reeled off six points to create a huge gap, which Jason couldn't bridge.

Srikanth fell behind 5-8 in the second game but bounced back with six straight points to reach 11-8 at the interval. The Canadian made it 10-11 after resumption.

Srikanth then stepped up the pace and was immediately rewarded as he opened up a 15-10 lead.

He constructed the rallies well to quickly jump to 19-11. Srikanth soon garnered 8 match points but sent one to the net and couldn't reach the shuttle next to concede two.

But his opponent went wide next and Srikanth sealed it comfortably.

The other Indian in the competition, Lakshya Sen, will be up against local challenger Hans-Kristian Solberg Vittinghus in his second-round match later in the day.

Subhankar Dey and Ajay Jayram were also in the fray but made first round exits on Wednesday.