Railways sprinter Merlin K Joseph smashed the 13-year-old national record in women's 100m race in the semi-finals on Sunday, but could manage only a bronze in the finals on the second day of the 53rd National Open Athletics Championships in Ranchi.

Merlin clocked 11.35secs to win the semi-finals heat number three as she bettered the earlier national record of 11.38secs in the name of Rachita Mistry set in 2000 in Trivandrum.

Merlin, however, finished third in the final race later in the day, clocking 11.95secs. Dutee Chand of ONGC won the gold in 11.73secs while H M Jyothi of Karnataka bagged the silver on a rain-marred day.

Aniruddha Gujar of LIC became the fastest male athlete of the Championships as he won the 100m dash in 10.46secs. Gujar sprung out of the blocks in the evening's final to finish well ahead of Tamil Nadu sprinter Suresh Sathya (10.66secs). Abdul Najeeb Qureshi, the joint national record-holder in 100m, finished third just one hundredth of a second behind.

In a biggest upset of the day, Ankit Sharma of LIC pocketed the gold in the men's long jump with a 7.73m ahead of Railways' Kumaravel Prem Kumar who had a hamstring injury during the final and finished with his first round leap of 7.62m.

Prem Kumar had recorded 8.09m at 79th Railways Athletics Meet last month but his effort is yet to be ratified as a national record.

Half-milers Tintu Luka and Sajeesh Joseph, both of Railways, lived up to their billings. Tintu retained her gold while Sajeesh made a 'hat-trick' of wins in 800m.

It was the fifth title at the National Open for Sajeesh and fourth for Tintu. Unlike Tintu, who got the gold in her own style in 2:01.87, Sajeesh had to fight it out with ONGC runner Manjeet Singh right up to the wire as just one-hundredth of a second decided the victor.

Tintu's coach P T Usha was satisfied with her effort.

"I am satisfied with her performance as rain marred the event, and also it is the season ending Championship," Usha said when asked why her protege failed to clock sub two minutes.

The day also saw a gold for Chandigarh javelin thrower Ravinder Singh. Trained in Melbourne, where he used to register 80 plus marks regularly, Ravinder brought the first ever gold medal for his state in the Open Nationals.

Daya Ram (of Services) retained the decathlon title after being locked into a see-saw battle with V V Raneesh (Railways). 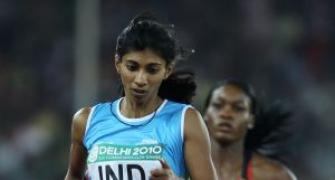 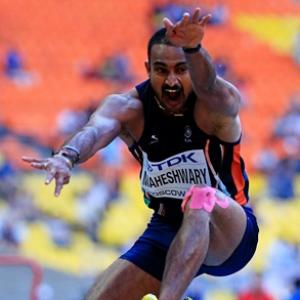 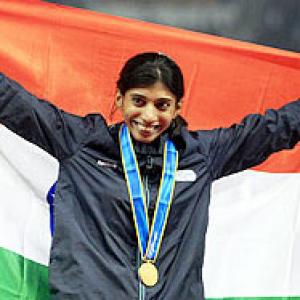