A summary of sports events and persons who made news on Monday. IMAGE: Viswanathan Anand finished half a point behind Wesley So, who won the blitz with six points out of a possible nine rounds. Photograph: Kind Courtesy, Spectrum Studios/Grand Chess Tour

World rapid champion Viswanathan Anand came up with a fine performance to be placed tied second in the blitz tournament of the Altibox Norway chess tournament, in Stavanger.

The finish in the top half means that Anand will get an extra white -- five white against four black games -- in what is known as the strongest tournament of the year.

To start the proceedings, Anand will be in white against Levon Aronian of Armenia in the opening round.

Wesley So of United States came up with a startling performance to win the blitz with six points out of a possible nine rounds.

Hikaru Nakamura of United States and Anand are tied for the second spot, a half point behind, while rating favourite and world champion Magnus Carlsen ended on fourth spot solely on five points.

Shakhriyar Mamedyarov of Azerbaijan benefitted from a superior tie-break to finish on fifth spot with 4.5 points.

Maxime Vachier-Lagrave of France and Fabiano Caruana of the United States are tied for the fifth spot but will play an extra black as they were relegated to the second half in the final standing.

Anand came up with a fine all-round display winning three, drawing five and losing one game in all. The lone loss came against Caruana while Vachier-Lagrave, Aronian and Ding Liren of China were on the receiving end against multiple-time world champion across formats.

Wesley So won three games in a row towards the end to win the tournament while Carlsen wasted his chances during the course of the entertaining event.

Indian shooters returned empty-handed from  ISSF World Cup Rifle/Pistol stage at Munich with the country's mixed team pairs failing to qualify for the final of the 10m air rifle mixed event on Tuesday.

On the concluding day, the pair of Apurvi Chandela and Ravi Kumar shot a combined score of 836.8 to end 11th in the qualification standings while the second Indian pair of Mehuli Ghosh and Deepak Kumar finished 20th with a combined effort of 835.

The Russian pair of Sergey Kamenskiy and Anastasiia Galashina notched up the fifth and final qualifying spot with a score of 838.2, going on to win the gold, ahead of two Chinese pairs who won silver and bronze respectively.

Athens Olympic champion and three-time Olympic medalist Olena Kostevych of Ukraine emerged as the star of the fourth and final ISSF World Cup winning the concluding 10m air pistol mixed team event to register a three-gold blitz at the competition.

China topped the medals tally with three gold medals, the same as Olena won for her country, but an overall 12 medals meant that the Asian powerhouse came away with the bragging rights.

Indian shooters made it to three out of 10 finals through Apurvi Chandela, Anjum Moudgil and Om Prakash Mitherval at Munich's historic Olympic Shooting Range and even though the first two came agonizingly close, a medal eluded India in this World Cup stage.

The world's top rifle and pistol shooters will now turn their attention to the most important event of the year scheduled a little over three months from now -- the ISSF World Championship for all events (rifle, pistol and shotgun).

What is considered the pinnacle of international sport shooting by the world's top shooters, the World Championship, organised every fourth year and two years after the Olympics, is scheduled to begin in Changwon, Korea in end August.

It will also kick off the Olympic cycle and the first quota places for the Tokyo 2020 Summer Games will be up for grabs at Changwon.

India's Shubhankar Sharma carded three-under 67 on the final round to finish a creditable tied 20th, but his senior compatriot Anriban Lahiri ended far behind at tied 58th spot at the Fort Worth Invitational golf tournament at the Colonial in Fort Worth.

The 21-year-old Subhankar had two three-putts on front nine and missed three putts, two of them for pars and one for a bogey, inside seven feet to finish six-under 274 for the week.

Lahiri endured a disappointing weekend here, with rounds of 68-69 to register a total of two-under 268.

Justin Rose continued his fine run as he closed with a six-under 64 and finished at 20-under for a three-stroke victory over defending US Open champion Brooks Koepka.

It was the ninth career PGA win for 37-year-old Rose. He also rose from world no. 5 to world no. 3 and if he wins at the Memorial, he could reach the no. 1 position.

The finish at Fort Worth was Shubhankar's second best finish on the PGA Tour after his tied 9th in WGC-Mexico.

It also broke a series of missed cuts in America for Shubhankar, who missed the cut twice in Texas and the Masters before this. Next on the cards for him is the Memorial.

Shubhankar had an eventful start with back-to-back birdies, followed by a bogey-birdie-bogey-par-birdie sequence. He turned in two-under 33 and then started the back nine with a double. He made up with birdies on 11th, 13th and 15th for a round of 67.

Shubhankar had seven birdies, two bogeys and one double bogey.

Source: PTI© Copyright 2021 PTI. All rights reserved. Republication or redistribution of PTI content, including by framing or similar means, is expressly prohibited without the prior written consent.
Related News: Shubhankar, Viswanathan Anand, ISSF, USA, Fort Worth
COMMENT
Print this article 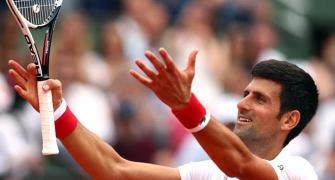 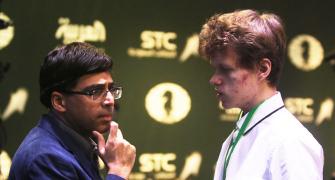 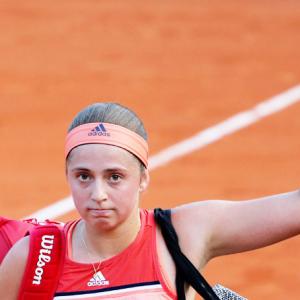