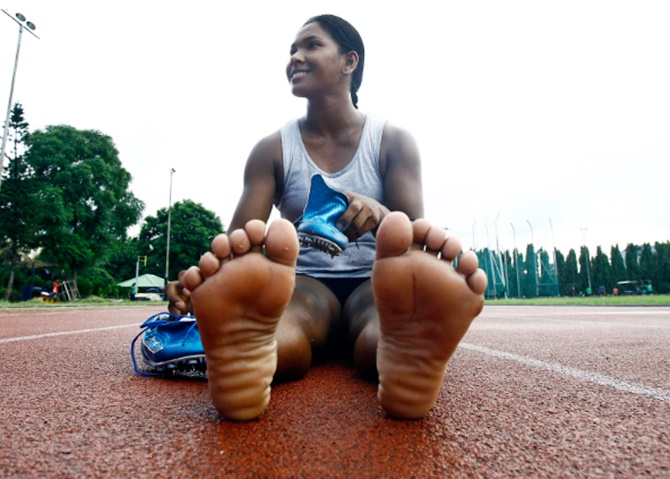 IMAGE: 'The journey from here should get easier. I would like to thank the Adidas team in India and at the Athlete Services Lab for helping me with this solution'. Photograph: Rupak De Chowdhuri/Reuters

German global sportswear company Adidas created and delivered customised footwear for Indian, who has been struggled to fit her feet into regular shoes.

"I'm so excited to finally have these pairs. I have already started training in these and I know from here on I can focus entirely on improving my performances without worrying about any pain," Swapna said.

"The journey from here should get easier. I would like to thank the Adidas team in India and at the Athlete Services Lab for helping me with this solution.

"I shall continue to work hard and keep moving towards my goal of winning honours for the country."

Adidas took Swapna to their Athlete Services Lab in Herzogenaurach, Germany for a detailed footwear analysis.

"Taking into consideration the unique task we had at hand, we at Adidas are proud to provide Swapna with unique pairs that shall help her across the seven different disciplines of Heptathlon," said Sharad Singla, Director - Brand Marketing, adidas India.

Apart from Swapna, Adidas recently signed athletes Hima Das and Nikhat Zareen amongst others to use sports as a catalyst to bring positive change.

The Mumbai schoolboy achieved the feat in the 4e Open International de Noisiel category, which has a rating category of 1400-2000 Elo points and concluded in Paris, his chess academy, SouthMumbaiChessAcademy reported.

Leading the tournament at the end of the seventh round, Bhagat narrowly missed out on the title after losing the eighth round and securing a draw in the ninth.

In the competition that saw the participation of 12 countries, Bhagat scored a total of six points out of the nine rounds and attained the third position.

The 18th seed got the better of top seed Favre Mathieu in the second round.

In the third round he got the better of Toure Shanthi who eventually went on to win the second place in the competition.

Bhagat gained a total of 118 ELO points to take his new rating tally to 1800 ELO points.

"This is a big victory for Kush in an open chess meet in Paris where he competed with the best players from across the world. It is good for him that he would play more such events in the future," said his coach Balaji Guttula.

India off to good start at boxing tourney in Finland

India were assured of two medals at the event after draws came out with Asian Championships silver-medallist Sumit Sangwan (91kg) and rookie Govind Sahani (49kg) getting byes into the semi-finals.

In the opening-round bouts held on Thursday, the 23-year-old Dagar, a silver-medallist from last year's India Open, prevailed 3-2 against Petrauskas.

It was a big victory for Dagar as the Lithuanian is also a former Youth Olympics gold-medallist and a bronze-winner at the 2017 European Championships.

However, the campaign ended early for Ankit Khatana (64kg). Khatana lost 0-5 to England's Luke McCormack in the opening round.

Close to 100 boxers from 15 nations are competing in this European calendar event.

The participating countries include Australia, Canada, England, France, Kazakhstan, Kyrgyzstan, Russia, and the United States of America among others.

The IAAF will elect its first female vice-president at its congress in September as part of minimum gender targets to bring parity to athletics governance, the global governing body said on Thursday.

The IAAF said it would also add an extra woman to its executive council after elections at the congress in Doha before the World Championships. The congress is currently comprised of 27 members, including six women, according to its minimum quota.

"On International Women's Day, I'm absolutely delighted to reinforce our commitment to gender balance in the governance structures of our sport," IAAF President Sebastian Coe said in a media release.

The IAAF said that two of its four vice president positions would be filled by women in 2027, while the council overall would have 10 female members by 2023 and parity by 2027.

Qatar to host MotoGP until at least 2031

Qatar will continue to host a round of the MotoGP world championship until at least 2031 after agreeing a five-year extension to a contract that already ran to 2026, organisers said on Thursday.

The Gulf state hosts the opening round of the 2019 championship at the Losail circuit this weekend, with Spaniard Marc Marquez chasing his sixth crown in the top class with Honda.

Qatar made its debut on the calendar in 2004 and became the first night race under floodlights four years later. It remains the only round of the championship in the Middle East. 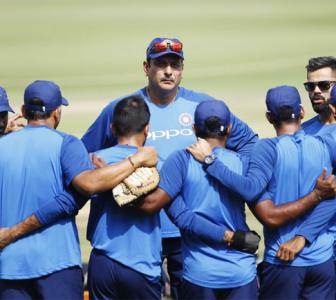 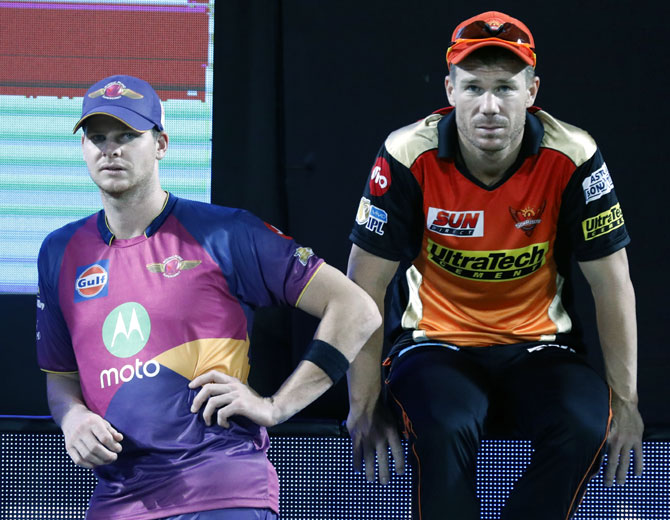 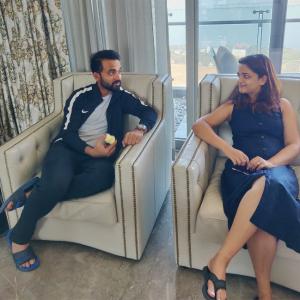