Heidi Merrill, who said she uploaded her "Game On" to Google's YouTube in March 2017, said her copyright was infringed after Underwood's producer Mark Bright rejected her August 2017 pitch at a conference in Nashville to use the song for "Sunday Night Football."

In their complaint, Merrill and her co-writers said Underwood's "Game On" is "substantially -- even strikingly -- similar, if not identical" to their song, including in title, tempo, meter, time signature, rhythmic and melodic contours and patterns, note and chord progressions, and hooks.

Bright and music publishing affiliates of Sony Corp and Warner Music Group are among the nine defendants named in the lawsuit, which was filed in Manhattan federal court.

A spokesman for Underwood did not immediately respond to requests for comment. Spokesmen for the NFL and Sony declined to comment. NBC, which is owned by Comcast Corp, and the publisher Warner/Chappell Music had no immediate comment.

Underwood has performed theme songs for "Sunday Night Football" since 2013.

Tim Foster, a lawyer at Sam P. Israel PC representing the plaintiffs, said the lawsuit followed the rejection by several defendants of his clients' effort to negotiate a resolution.

"Ms. Underwood recorded a song that was substantially similar to the original song submitted through her producer, without giving credit or compensation of any kind to the original songwriters," Foster said in an interview. "We assume that there will be significant damages."

Underwood, 36, became famous by winning the fourth season of "American Idol" in 2005. She has since won dozens of country music awards and seven Grammy awards.

David Ortiz was not intended victim of shooting: Dominican prosecutor

Ortiz was shot during the night of June 9 while seated at an open-air nightclub in the capital of his native country. However, Rodriguez said the attackers had meant to kill another man sitting at the table with the popular baseball star.

"The investigation shows that the object of the criminal attack on David Ortiz was not him," Rodriguez told a news conference, saying that the intended victim had been a friend of Ortiz, whom he identified as Sixto David Fernandez.

Ortiz, a national hero in the Dominican Republic, has been recovering in a Boston hospital since the attack took place. His friend Jhoel Lopez, a television host, was also wounded in the leg in the shooting.

Fernandez was a frequent visitor to the club and regularly reserved a table there on Sundays, Rodriguez added.

The man suspected of planning the attack was Victor Hugo Gomez, a fugitive from U.S. justice with links to Mexico's Gulf Cartel drug gang, who believed Fernandez had betrayed him to law enforcement authorities some years ago, Rodriguez said.

Several arrests have been made over the attack, and Rodriguez said during his news conference that four more people linked to the shooting had been taken into custody.

Among them was Ramon Martinez Perez, the man suspected of carrying out the attack, he added.

Widely known as "Big Papi," the 43-year-old Ortiz is a sporting legend in Boston for his role in three World Series baseball championships. 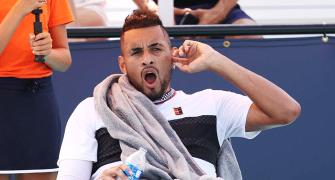