Spain captain Sergio Ramos has criticised international teammate Gerard Pique for speaking out in favour of Catalonia's controversial planned referendum on independence, risking a rift in the team a week before two crucial World Cup qualifiers.

Pique, who is regularly booed by large sections of Spain supporters for his outspoken comments against Real Madrid and his perceived support of Catalan independence, tweeted in favour of Sunday's referendum on Thursday -- without backing a split for Spain -- but urged supporters to behave peacefully.

Ramos later criticised his teammate for wading into the debate on the referendum, which the Spanish government deems illegal and has tried to prevent from taking place, as tension builds in the country ahead of one of the most significant days in the 39 years since Spain returned to democracy.

"Pique's tweet was not the best thing to do if he doesn't want to be booed," Ramos told reporters.

Ramos and Pique, in being flag-bearers for fierce rivals Real Madrid and Barcelona, have long had a delicate relationship as Spain's two main centre backs but have generally managed to patch up their differences when playing for the national team.

Ramos, however, said Pique had risked causing divisions in the Spain camp with his comments.

"Perhaps the tweet is not the best thing for the group," he added.

"Everyone is free to say what they think, although as a captain I'm always concerned about the atmosphere in the team and Pique knew what he was doing. Maybe it wasn't the right time to do that and it doesn't help a lot."

They need four points from the two games to book their place in Russia. England midfielder Dele Alli will miss the World Cup qualifier against Slovenia next week after being handed a one-match ban for making an obscene middle-finger gesture.

Alli was caught on camera raising his finger in the direction of French referee Clement Turpin during England's qualifier against Slovakia at Wembley this month and had risked a potential four-game ban.

He had said the gesture was made in jest towards his former Tottenham Hotspur team mate Kyle Walker.

World soccer's ruling body FIFA ruled on Friday that the 21-year-old's behaviour had been "offensive and unsporting" and also fined him 5,000 Swiss francs ($5,200).

Alli, who has been named in England's squad for the next two qualifiers, will now be available to play Lithuania on Sunday week.

England lead Group F on 20 points, five ahead of second-placed Slovakia, and are one win away from sealing their spot at next year's World Cup in Russia. 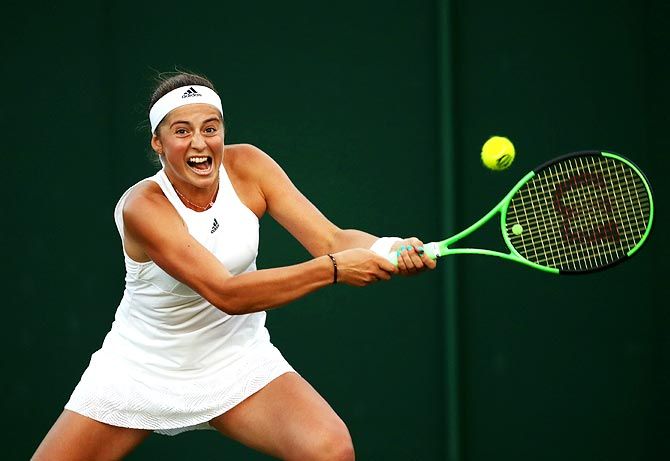 Jelena Ostapenko overcame a sluggish start to stun world number one Garbine Muguruza in the quarter-finals of the Wuhan Open on Thursday and the Latvian suggested she plays more confidently with less time to prepare.

The French Open champion rallied from a set down to beat the Spaniard 1-6, 6-3, 6-2 and set up a last-four encounter against in-form Australian Ashleigh Barty.

By registering her first win over the Wimbledon champion, Ostapenko moved a step closer to her third title of the year and the 20-year-old eighth seed felt that playing in back-to-back tournaments had brought out the best in her.

"Sometimes it's actually even better when you don't have that much time to prepare," she told the WTA website (wtatennis.com) after her victory over the top seed.

"Sometimes you come so many days before, you get prepared really well for the tournament, you go out and lose first round," she added.

"When you come from another tournament, especially I won the tournament, I'm more confident.

"I just came from there. First match I was, 'Okay, how I'm going to do? Just my best. What happens, that happens.' Then I won, and now I'm in the semi-final."

Muguruza, who took a medical timeout before the final set to treat a thigh injury, said she was undone by Ostapenko's all-out attacking game.

Ostapenko also expects a tough fight from Barty, who upset former world number one Karolina Pliskova 4-6, 7-6(3), 7-6(2) in another last-eight clash.

In the other semi-final encounter on Friday, Greece's Maria Sakkari takes on Frenchwoman Caroline Garcia.

Five-time champion Viswanathan Anand, Vidit Santosh Gujrathi and Swapnil S Dhopade emerged victories in the sixth round of the Isle of Man International chess tournament, in Douglas, Isle of Man.

Gujrathi was the best-placed Indian at the second position after he defeated compatriot Harsha Bharathakoti, who is 308 rating points below him, in 42 moves after playing with black pieces.       The second highest Indian in the fray, Gujarathi next takes on World Champion Carlsen Magnus of Norway.

After the sixth round, Anand and Swapnil S Dhopade were at the joint third place along with 16 others with 4.5 points.

Swapnil, on the other hand, took 49 moves to overcome Norwegian grandmaster Tari Aryan. The Indian will meet Richárd Rapport, a Hungarian grandmaster.

Meanwhile, 12-year-old R Praggnanandhaa showed great resilience as he battled for 88 moves before signing truce with Swedish grandmaster Grandelius Nils. The young prodigy will square off against Armenian-born American grandmaster Varuzhan Akobian next.

Among other Indians in fray, Sunilduth Lyna Narayanan saw off compatriot Adhiban B in 65 moves.         Carlsen holds the top position at 5.5 points, while American duo of Fabiano Caruana and Nakamura Hikaru were at the joint third spot after round 6.