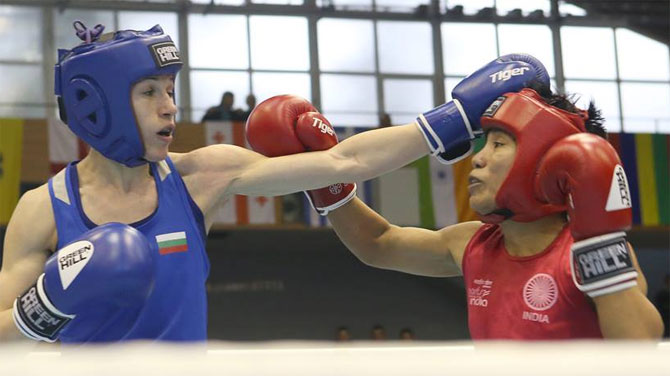 Meena Kumari Maisnam continued her fine run to win gold medal in the 54 kg at the Boxing World Cup in Cologne on Saturday.

Sakshi (57kg) and Pwilao Basumatary (64kg) lost their final bouts and had to settle for the silver while Pinki Rani (51kg) and Parveen (60kg) won bronze as India finished with five medals.

Meena, the 2014 Asian Championships bronze medallist with three National Championships titles to her credit, edged Thailand's Machai Bunyanut on points in the summit clash. She had earlier won the gold at the prestigious Strandja Cup.

This was the only bout of the tournament for the Manipur pugilist as she had been directly placed in the final due to a smaller draw.

The Irish stamped her authority in a commanding 5-0 performance, leaving no chance for the 18-year-old Indian youngster to make a comeback in her first elite international final.

India Open gold medallist Basumatary gave her best but came up short against China's Chengyu Yang, who won on points.

India had sent a seven-member team to Cologne for the tournament following a healthy haul of six medals from the erstwhile Chemistry Cup held at Halle last year.

Gaurav Solanki (52kg) and Mohammed Hussamuddin (56kg) were the only Indians to stand on the top podium in the last edition.

The women's 4x100m relay team, anchored by Dutee Chand, made the cut for the upcoming Asian Athletics Championships while most of the runners called for confirmatory trials in Patiala on Saturday failed to touch the qualifying standards.

The Athletics Federation of India had announced a 51-member team for the continental flagship event to be held in Doha from April 21-24 but as many as 23 were named in the list subject to trials.

In the trials held at the NIS on Saturday, only the women's 100m relay team and K Gomathi (800m) crossed the qualifying standards set by the AFI.

The AFI said that its selection committee will make the team selection on Monday. The athletes will be selected in the team or will be left out from among those who underwent trials on Saturday.

"Yes, Dharun and Manjit are injured and both of them are more or less out of the Asian Championships. Sudha did not come for the trials today," an AFI official told PTI.

The women's 100m relay team of Dutee, Hina, Archana Suseendran and K Ranga clocked 44.12 seconds as against the AFI standard of 44.50 seconds.

The men's 4x100m relay team of Harjit Singh, Gurinder Vir Singh, Gurulal Singh and Saifikul Mondal clocked 40.20 seconds in the trials well outside the qualifying time of 39 seconds and they are unlikely to be named in the team.

In men's 5000m trials, Gavit Murali Kumar and Abhishek Paul are also unlikely to get the nod of the selectors after they clocked 14:24.34 and 14:25.93 respectively in Saturday's trials against the qualifying time of of 13:50.00.

In men's triple jump, Praveen Chithravel only managed a mere 14.92m, well below the qualifying distance of 16.50m.

In 400m hurdles trials, M Arpita clocked 58.05 seconds as against the qualifying time of 57.70 seconds. In 3000m steeplechase, Parul Chaudhary is unlikely to make it to the team after clocking 9:56.70 in Saturday's trial while the qualifying time is 9:50.00.

The same is in the case of Sharmila Kumari in women's javelin throw as she could only come up with an effort of 55.16m as against the qualifying distance of 58m.

In women's discus throw confirmatory trials, Navjeet Kaur Dhillon (56.32m) and Kamalpreet Kaur (56.03m) could not touch the qualifying distance of 58m. Kamalpreet has a season's best of 60.25m while Navjeet has 56.36m.

The I-League Committee which met in Bhubaneswar on Saturday, "unanimously" decided to refer Minerva Punjab owner Ranjit Bajaj's frequent "outbursts" on social media against All India Football Federation to the Ethics Committee.

An AIFF official said that Bajaj's name was not taken but the members took the decision that a proposal for action regarding his constant social media criticism directed to the federation will be sent to the Ethics Committee.

"There was a proposal from some members about these frequent outbursts against the federation on social media. The members did not take any name but it was clearly directed at Bajaj," a member who attended the meeting told PTI.

"It was a unanimous decision and a proposal to take action for these outbursts will be sent to the Ethics Committee," he added.

The Ethics Committee is headed by Amod Kanth.

The I-League Committee meeting was held at the sidelines of the Super Cup summit clash between FC Goa and Chennaiyin FC on Saturday.