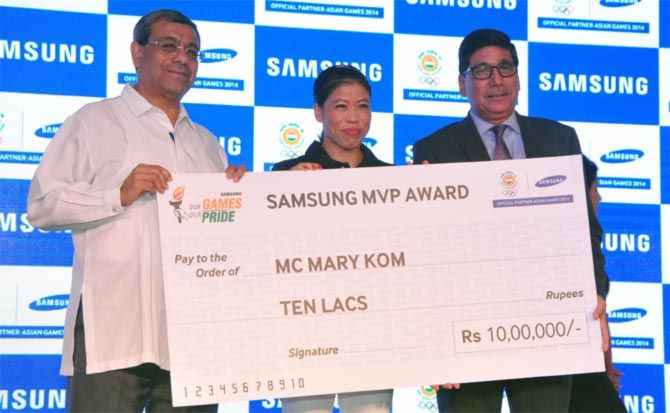 MC Mary Kom (centre) gets the Most Valued Player award.

London Olympics bronze medallist M C Mary Kom was on Monday voted the ‘Most Valuable Player’ of India's campaign at the Incheon Asian Games, at a felicitation for the medal winners by the contingent sponsors, Samsung India.

Mary Kom, who became the first Indian woman boxer to win a gold medal at the Asian Games when she won the flyweight (-51kg) class, was named following a poll which included the 11 individual/team gold winners, including the men's hockey team.

None of the members of gold-winning men's hockey team turned up for the felicitation while the Indian Olympic Association was represented by its treasurer, Anil Khanna.

Khanna said IOA president N Ramachandran and secretary-general Rajeev Mehta could not make it to the event as they had "prior engagements".

India returned from the just-concluded Games with 11 gold, 10 silver and 36 bronze medals.

Mary Kom said winning gold at the Asian Games proved that she can still be in top form despite being a mother of three children.

"Many people had doubted whether I would be able to win a gold in the Asian Games at this situation. First, it is difficult in our society to continue this kind of sport after having three children," said the five-time World champion.

"There is a mindset that a woman after becoming a mother cannot achieve success in sport. But I think I have proven wrong this kind of thinking and mindset," she said.

Reflecting on her moments of glory in the final bout in Incheon, she said, "When I am inside the ring I don't think of whether I may lose or win. I just think of giving my best.

"I won a medal in the 2010 Games in Guangzhou also when women's boxing was introduced in the Asian Games. Now I have returned with a gold. I am really happy to have become the first Indian woman boxer to win a gold in the Asian Games," she said.

Yogeshwar, on his part, part said India should aim to win more gold medal in wrestling at the Asian Games than the lone one this time.

"I won a gold this time and that was after 28 years. It's a long wait. I feel winning a lone gold in an edition of Asian Games is not enough. India should win more than one gold in each edition so that we don't wait for long," he said.

He said he is determined to win gold in the World Championships next year and then train his guns at the 2016 Olympics.

"I have settled down myself after changing weight to 65kg. In the three tournaments I have fought in 65kg so far I have won gold in all of them -- the first one in Italy, then Commonwealth Games and now Asian Games." 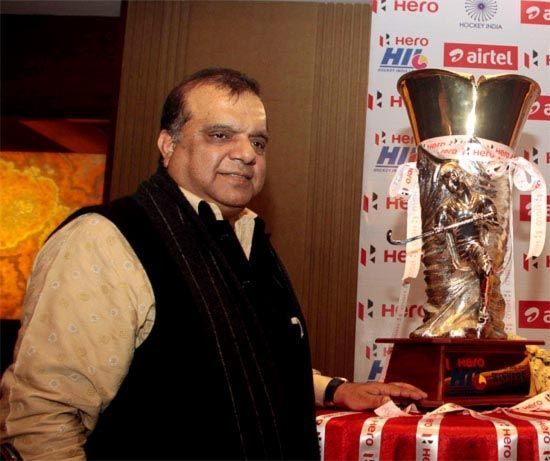 Narinder Batra was elected unopposed as president of the Hockey India while Mohammed Mushtaq Ahmad and Rajinder Singh were elected general-secretary and treasurer respectively at the fourth Hockey India Congress, in New Delhi, on Monday.

Batra completed his four-year term as the secretary-general and with no opposition in the Hockey India ranks did not face any problems during his elevation to the top post.

All the office-bearers were elected unopposed at the meeting.

Speaking on the occasion, Sports Minister Sarbananda Sonowal said, "I will extend complete support from the Ministry and myself to hockey for competing in the 2016 Rio Olympics and 2018 World Cup in India, as I am very much confident that the team will come up with even better results in their upcoming and future tournaments."

Talking about his new role, Batra said: "Also, being appointed as an unopposed president, I feel overwhelmed with the trust and faith that the members have showed in me. I shall strive to live up to the new role that I am stepping into and hoping to justice to it.

"I would like to thank Sports Minister Sarbananda Sonowal for attending and addressing the event and I am sure that with the support from the Sports Ministry we will generate better results in the future," he added.

The Indian Under-21 hockey team went down 0-2 to Britain in their second match at the Sultan of Johor Cup, in Johor Bahru, Malaysia, on Monday.

In a keenly-contested first-half, Britain forged ahead in the 28th minute through Benjamin James Boon.

Trailing by a goal, the Indians came out attacking in the second half but were unable to keep pace with the fast-running Britons and conceded another goal in the 50th minute when Samuel French found the mark.

Commenting on the match, coach Harendra Singh said, "The boys played well but failed to create opportunities that could be converted into goals. We need to work on our finishing as well as penalty-corners.

“Nevertheless, the loss will not demoralise the team. We are looking forward to taking on Pakistan in the next game.

“I am sure the boys will make a come-back and put up a remarkable show in the upcoming matches." 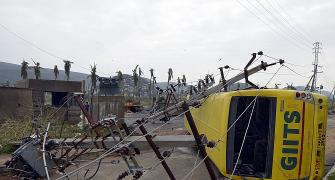 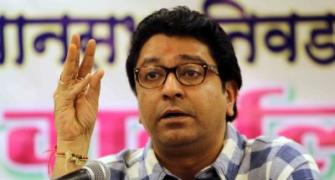 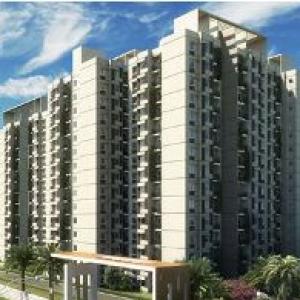