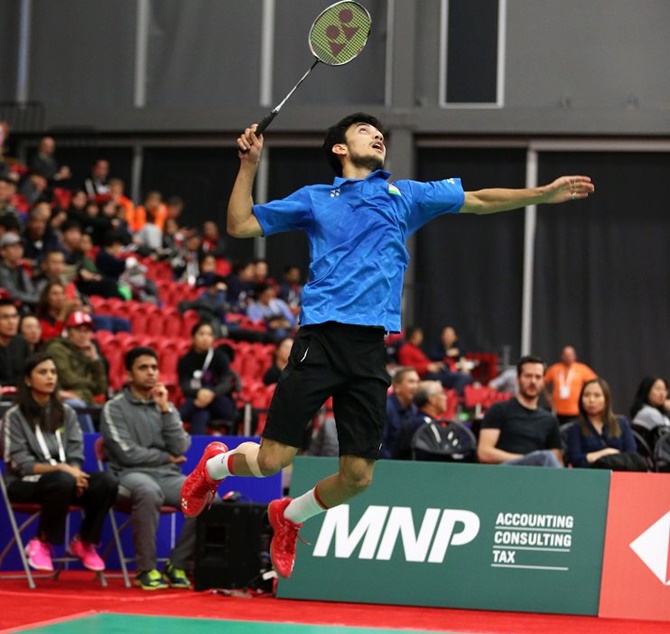 Rising Indian shuttler Lakshya Sen stormed into the men's singles final with a straight-game win over Felix Burestedt of Sweden at the Dutch Open Super 100 tournament, in Almere, The Netherlands, on Saturday.

The 18-year-old Indian, who had clinched the Belgian Open last month, beat Felix 21-12, 21-9 in a lop-sided semifinal contest that lasted 33 minutes.

Lakshya had earlier sailed into the men's singles semifinals with a 21-9, 21-16 win over compatriot B M Rahul Bharadwaj on Friday night.

Lakshya, who had won the Asian Junior champion, a silver at Youth Olympic Games and a bronze medal at World Junior Championships last year, will now take on Yusuke Onodera of Japan in the summit clash on Sunday.

In the semifinal, it was neck-and-neck between Lakshya and Felix till the first six points before the Indian pocketed five straight points to surge ahead 11-6.

Felix clawed his way back to reduce the margin to 10-12 before Lakshya upped his game to pocket the first game.

The second game was a one-sided contest as Lakshya raced to an 8-0 lead. Felix managed to secure nine points but Lakshya kept his nose ahead to seal the contest.

Ealier in the quarterfinals against Bharadwaj, Lakshya dished out a dominating game, moving to a 6-0 lead early on and then jumped to 11-3 at the interval.

He continued his march ahead, reeling off six straight points at 13-8 to move to 18-8 and soon pocketed the game comfortably.

In the second game, Bharadwaj opened up a 4-2 lead for a brief period but Lakshya came back to turn the tables and surged to 11-6 at the break.

Bharadwaj tried to make a comeback but Lakshya kept his nose ahead to eventually shut the door on his opponent.

Shot putter Tajinder Pal Singh Toor broke his own national record to lit up a rainy day in the 59th National Open Athletics Championships in Ranchi.

Representing AFI, Toor came up with a best effort of 20.92m to improve upon his own earlier national record of 20.75m which he had set while winning the Asian Games gold medal in Jakarta last year. His farthest throw came in his third attempt.

After a half-hour delay caused by heavy rain, the 25-year-old Toor warmed up with a put of 20.41m, just 2cm short of his season's best that he managed during the World Championships in Doha on October 3.

He followed that up with a 20.29m effort before uncorking the biggest throw yet by an Indian and raising his arms in triumph as soon as he knew he had got a new national mark.

On his subsequent attempts, he egged himself on to try and get 21.10m -- the Olympic Games qualifying standard -- but without any success.

"I was in good rhythm today. I was aiming 21.30 to 21.40 and I think it crossed that in the last throw but unfortunately it was a foul. I will try again to qualify for Olympics at the World Military Games in Wuhan, China later this month. It will be a good competition at Wuhan," Toor said.

Noah Nirmal Tom and VK Vismaya claimed the 400m titles for men and women respectively as evidence of their rising stature among India's consistent quartermilers. The 25-year-old Tom clocked 45.88 seconds, only his second sub 46 second run.

The 22-year-old Vismaya's time of 52.71 seconds was her fifth fastest, having clocked 52.12 In the Josefa Seckare Memorial in Brno on August 28. With Jisna Mathew (Kerala) not finishing the race, Vismaya beat two challengers from Haryana -- 19-year-old Kiran and Anjali Devi Kundu.

The home state's Priyanka Kerketta won a tough women's long jump battle with a 6.16m effort. She endured stiff competition from Railways Rintu Mathew, whose final two jumps were over 6m gave her the silver medal ahead of team-mate Neena Varakil.

The Indian junior men's hockey team rallied from two-goal deficit to beat hosts Malaysia 4-2 in its opening match of the 9th Sultan of Johor Cup on Saturday.

Muhammad Hassan (8th) and Muhammad Zainudin (9th) were the goal-scorers for Malaysia.

Malaysia started the first quarter in an aggressive note with Muhammad Hassan and Muhammad Zainudin finding the back of the net in the eighth and ninth minutes respectively. Hassan put Malaysia ahead with a field goal before Zainudin converted a penalty corner to take a 2-0 lead.

The Indian team tried to make a few inroads, but the Malaysian defence stood strong. India and Malaysia were on equal terms for the rest of the quarter.

India got off to a great start in the second quarter and earned a penalty corner but failed to score from it. A few minutes later, India pulled one back through a penalty stroke by Pratap Lakra.

India continued to be the more aggressive side and kept looking for openings. The team's persistence paid dividends when it earned a penalty corner just before the half-time whistle.

However, the Malaysian defensive unit stood firm once again. Malaysia led 2-1 at the end of the first half.

India rode on the momentum and levelled the match at the start of the third quarter with Pratap Lakra converting a penalty corner.

India continued to put pressure on the Malaysian defence and earned the lead for the first time in the match through a penalty corner conversion by Shilanand Lakra in the 39th minute.

The Indian team continued to be the dominant side as it led 3-2 at the end of the third quarter.

India remained on the attack in the fourth quarter as well, but the Malaysian defence managed to block everything thrown at them. The home side tried to fight back through some crucial moves, but India ensured that they stayed in the lead.

India had an excellent chance to score their fourth goal when they earned a penalty corner in the dying minutes of the match, but could not covert it. However, Uttam Singh scored a brilliant field goal in the last minute of the match to help India walk off the field as 4-2 winners.

India will face New Zealand in their next round robin league-stage match on Sunday.