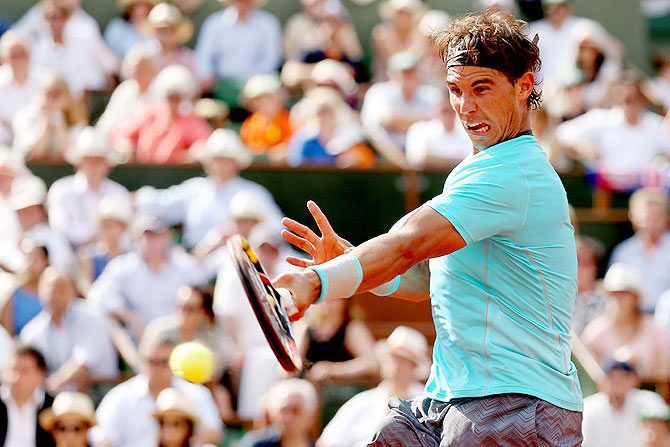 US Open champions Marin Cilic and Serena Williams kicked off their China Open campaigns with straight sets victories against battling underdogs on Monday, but Rafael Nadal suffered defeat in a rare doubles outing on his return from injury.

Nadal, who had been sidelined for over three months with a wrist injury, teamed up with compatriot Pablo Andujar in the men's doubles but they lost 5-7, 6-4, 10-4 to Czech Tomas Berdych and American John Isner in his first match since losing in the last 16 at Wimbledon.

The Spaniard is the second seed in the men's singles draw and will face Richard Gasquet of France in first round action on the Beijing blue courts later in the week.

The 28-year-old has picked a tough tournament to mark his return with eight of the world's top 15 taking part in the ATP 500 outdoor hardcourt event with five spots still up for grabs at the season-ending World Tour Finals in November. 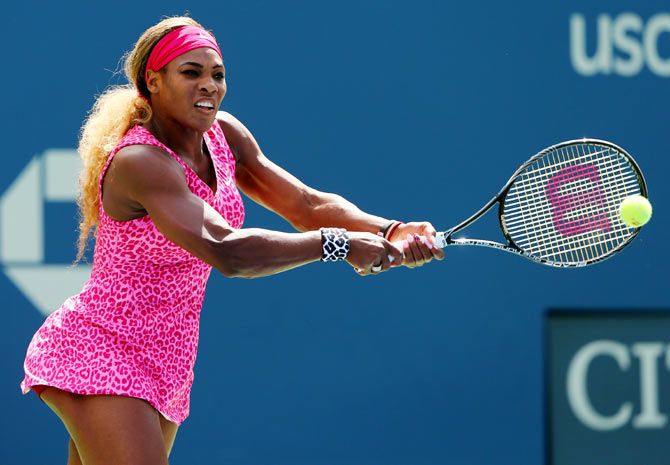 Williams started sluggishly and found herself 5-0 and 40-15 down to Spanish qualifier Silvia Soler Espinosa.

However, the World No 1 saved four set points in a brilliant fightback before taking the match 7-5, 6-2 to set up a second round clash with another qualifier, Bulgarian Tsvetana Pironkova.

It was the American's first outing since retiring in the first set of her opening match against Alize Cornet at the Wuhan Open last week because of illness.

One of those hoping to join Nadal in London is Croatian Cilic, playing his first ATP tournament since winning a maiden Grand Slam at Flushing Meadows in early September, who brushed aside local wildcard Bai Yan 6-3, 6-4 on Monday. 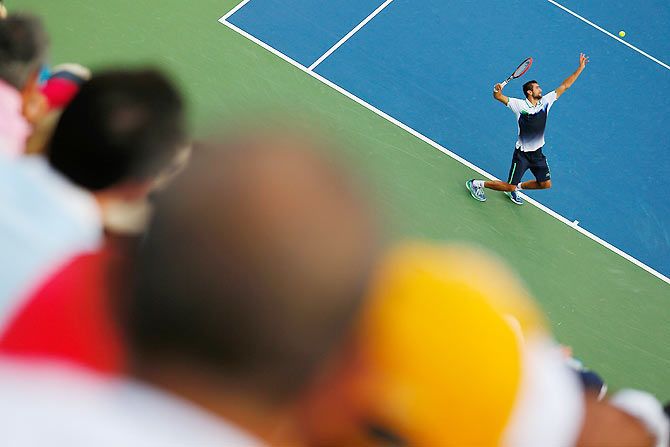 The Chinese world number 464 pushed the fourth seed for long periods on an empty stadium court but wasted his four break point opportunities on the Cilic serve.

By contrast, Cilic was able to capitalise on his unheralded opponent's mistakes with Bai's forehand faltering as the match progressed, allowing the Croatian to secure a break in each set to advance to the second round.

"It's important for me to keep focusing on the improvement of my game and try to recreate the game I was playing at the US Open," Cilic said.

Serbia's Viktor Troicki also advance after beating Russia's Mikhail Youzhny 6-3 6-4 with either the third seeded Berdych or Spain's Feliciano Lopez awaiting him in the next round.

Troicki's compatriot, Ana Ivanovic, had a far easier day by swatting aside Swiss teenager Belinda Bencic 6-2, 6-1 to advance to the second round of the women's draw.

Ivanovic currently holds the eighth and final spot on the WTA's Race to Singapore standings with four places still up for grabs for next month's season-ending event. World No 5 David Ferrer's poor start to the ATP's Asian swing continued on Monday when he was dumped out of the Japan Open in the first round by fellow Spaniard Marcel Granollers.

Granollers, ranked 44th, fought back for a 4-6, 6-4, 6-4 win on the Tokyo hard courts as Ferrer's hopes of qualifying for the ATP World Tour Finals in November took another knock.

Ferrer also lost in the first round of the Shenzen Open last week to Viktor Troicki and is currently seventh in the ATP Race standings with the top eight qualifying for a place in London.

Ninth-placed Milos Raonic and 11th-ranked Jo-Wilfried Tsonga open their Japan Open accounts on Tuesday as they look to pick up precious points to put the heat on Ferrer.

It was a first win for Granollers over his compatriot in six attempts and his reward is a second-round match-up with American Steve Johnson, who served 12 aces in dispatching local qualifier Hiroki Moriya 7-6(4), 6-2.

Home hopes in Japan rest with U.S. Open finalist Kei Nishikori, who begins his campaign later in the week against Croatia's Ivan Dodig.

Nishikori, who became the first Asian man to reach a Grand Slam singles final in New York earlier this month, won last week's title in Malaysia to move up to a career best seventh in the world rankings.

THE RACE TO SINGAPORE Albin Ekdal took advantage of a dramatic Inter Milan collapse to score a 15-minute first-half hat-trick and give lowly Cagliari a 4-1 win at the San Siro on Sunday that not even the Sardinians could have believed was possible.

Unbeaten Inter had conceded only one goal in their opening four Serie A games but fell apart against Zdenek Zeman’s team, who had been bottom of the table with only one point, after Yuto Nagatomo was sent off in the 28th minute.

Napoli eased the pressure on beleaguered coach Rafael Benitez with a 1-0 win at Sassuolo, ending a run of three Serie A games without a win, and AC Milan were held 1-1 at promoted Cesena.

Marco Sau pounced on poor defending by Nagatomo to head Cagliari in front in the 10th minute and, although Pablo Daniel Osvaldo replied for Inter eight minutes later, their troubles were only just beginning.

One minute after Nagatomo's sending-off, the Inter defence was slow to react after Samir Handanovic saved Daniele Dessena’s shot and Ekdal put Cagliari back in front.

The Swede scored again five minutes later, providing the finishing touch to Victor Ibarbo's run, and completed his hat-trick one minute before halftime after Inter's shambolic defence failed to clear a corner.

Cagliari, who moved up to 13th in the league, even missed a penalty in between when Andrea Cossu's effort was stopped by Samir Handanovic.

Napoli's performance still fell short of the level expected from a team who were seen as title challengers before the season.

Spanish forward Jose Callejon turned in Gonzalo Higuain's cross from close range just before the half hour to end Napoli's run of three Serie A games without a win.

After enjoying the best of the first half, Napoli were under pressure after the break against opponents who have only scored once in five games.

Simone Missiroli’s shot curled just over the bar on the hour and Napoli goalkeeper Rafael had an even bigger let-off when Federico Peluso's shot was deflected onto the bar by Juan Camilo Zuniga hear the end.

Napoli, third last season, have seven points from their first five games, already eight behind leaders Juventus and AS Roma. Argentina forward Higuain has yet to score a Serie A goal this season.

Milan, who also have seven points, fell behind to a Davide Succi goal in the tenth minute at Cagliari before Adil Rami headed the equaliser nine minutes later.

Milan defender Cristian Zapata was sent off in the second half for fouling Gregoire Defrel as he steamed towards goal. 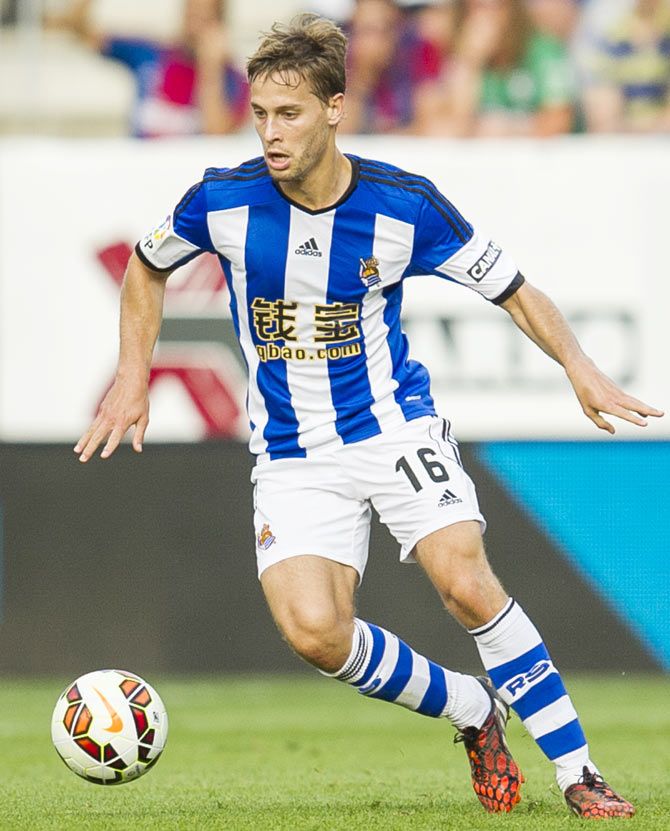 Sergio Canales grabbed a deserved equaliser for Real Sociedad as lacklustre Valencia lost ground on Barcelona at the top of La Liga with a 1-1 draw on Sunday.

Carles Gil scored on his first start in the league for Valencia after 15 minutes with a clinical volley from a cushioned header by Paco Alcacer, but they failed to show the sparkling football of recent games.

Sociedad pushed forward from the start with Carlos Vela forcing a smart save out of keeper Diego Alves and while they merited a goal they were fortunate when a Canales cross after 36 minutes escaped everyone and crept into the corner.

Valencia won their previous four games and scored 12 goals in the process that put them top of the table but they looked tired against Sociedad, especially in the second half.

The Basque side appeared happy to settle for the draw although Esteban Granero headed just wide in injury time.

Valencia are now joint second on 14 points with Atletico Madrid who beat Sevilla 4-0 on Saturday. They are two points behind Barcelona who had a thumping 6-0 win over Granada.

Earlier on Sunday an injury time strike from Edgar Mendez gave Almeria a 1-0 win away to Deportivo La Coruna while Michel got the only goal as Getafe beat Malaga 1-0. 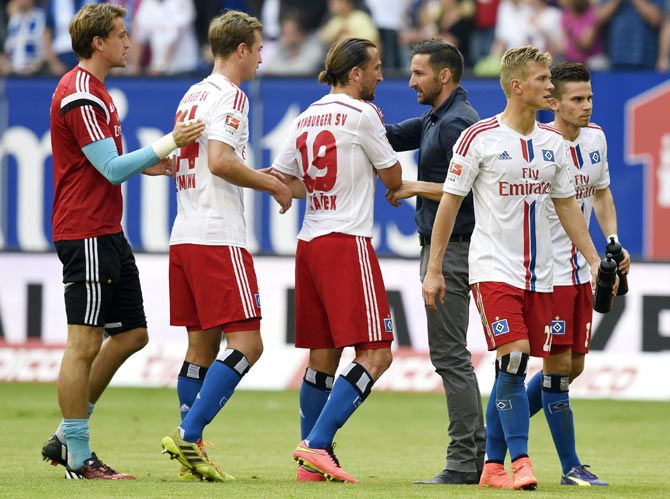 Former European champions Hamburg SV set a Bundesliga record for the longest goal drought since the start of the season after failing to score in more than five league games on Sunday.

Hamburg broke the record held by VfL Bochum from the 1979/1980 season when they went without a goal in their opening five games and also failed to score in the first 25 minutes of their sixth league game against Eintracht Frankfurt on Sunday.

The northern club, who needed a relegation playoff last season to stay up, are in last place on three points despite spending tens of millions to bring in players like Lewis Holtby and Swiss international Valon Behrami this season.

Rossi ignores doctor, checks himself out of hospital Valentino Rossi has checked himself out of hospital in defiance of doctor's advice to continue his recovery from concussion in his own motorhome.

The 35-year-old Yamaha rider, nine-times a world champion in all categories, was taken to hospital after falling heavily early in Sunday's race at the Motorland Aragon circuit won by Spaniard Jorge Lorenzo.

Rossi tweeted a picture of himself saying he was fine apart from the "head ache".

"Valentino is progressing very well. In Alcaniz the CT scan was negative and although the local doctor wanted to keep him at the hospital overnight, Valentino discharged himself," MotoGP medical director Michele Zasa said in a statement issued by his Yamaha team.

"Now he's in his motorhome relaxing, and in any case the Clinica Mobile is keeping him under observation for the whole night.

"From a neurological point of view he has fully recovered and at the moment he's fine so we'll keep on taking care of him overnight and hopefully by tomorrow morning everything is going to be ok."

The next stop in the championship is in Japan in two weeks.