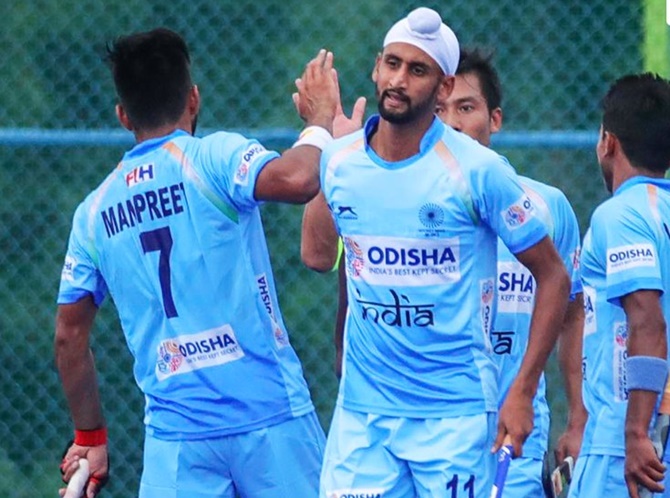 The Indian men's hockey team pulled off a sensational 4-2 win over New Zealand in the first Test of the three-match series at the Sports Authority of India's Bengaluru Campus on Thursday.

The forwards won India their first Penalty Corner of the match in the opening minute. Rupinder Pal, making a comeback into the squad after the Gold Coast Commonwealth Games, was splendid as he fired the ball low to beat New Zealand Goalkeeper Richard Joyce in the second minute.

Though the visitors had an opportunity to equalise in the seventh minute, Indian goalkeeper Krishan Pathak was attentive at the goalpost.

In the 15th minute, India doubled their lead when Manpreet Singh's cross was brilliantly picked up by forward Mandeep Singh, who swiftly deflected it into goal.

In the 26th minute, New Zealand finally made a breakthrough with Stephen Jenness scoring a perfect field goal that narrowed the lead to 1-2.

After the half time break, India came back with a stronger attack. Forward SV Sunil, created India's third PC and drag-flicker Rupinder Pal Singh was brilliant yet again as he flicked towards top right of the net taking India's lead to a comfortable 3-1 in the 34th minute.

In the 38th minute, SV Sunil created yet another opportunity for India to score as he won another PC. Harmanpreet Singh was spot-on as he improvised the injection to powerfully convert India's fourth goal.

The final quarter saw New Zealand test Indian defenders as they made strong forays into the striking circle. Their efforts paid off with Stephen Jenness converting his second goal of the match as his shot bounced off Indian goalkeeper Suraj Karkera's pad into the back of the net.

With score-line reading 4-2, New Zealand won a crucial PC with four minutes remaining on the clock. But Nic Woods' drag-flick was way off the target. The visitors earned yet another PC with a little over a minute remaining for the final hooter. And this time, Woods' powerful flick was well defended by Karkera. New Zealand won two more back-to-back PCs with 50 seconds on the clock but Karkera kept the visitors at bay.

The second Test will be played on Saturday.

Veteran Indian star Leander Paes, who missed the entire clay and the grass court season, made a winning return to competitive tennis with American partner Jamie Cerretani at the ATP Hall of Fame Open in Newport.

Paes, playing his first match since creating the Davis Cup world record in February for most number of wins in doubles, and Cerretani, defeated Luke Bambridge and Jonny O'Mara 6-4, 6-3 in their opening round of the $ 623,710 hard court event.

Paes and his partner are now up against giant-killers Jeevan Nedunchezhiyan and Austin Crajicek, who toppled top seeds Nicholas Monroe and John-Patrick Smith 5-7, 6-1 10-8, Jeevan has a good record playing against Paes, winning twice against the Indian legend this season -- at Tata Open Maharashtra in Pune and at Dallas Challenger.

Also advancing to the quarterfinals was in-form Divij Sharan, who along with partner Jackson Withrow, seeded second, beat Martin Redlicki and Evan Zhu 6-3, 6-3.

Third seeds Purav Raja and Ken Skupski also moved to the last-eight with a 7-5, 6-4 win over Ruben Bemelmans and Denis Kudla.

Gold Coast CWG bronze medallist Divya Kakran had to settle for a silver medal after being too defensive in the final against nemesis Meerim Zhumanazarova while Karuna and Reena returned with bronze medals at the Junior Asian Wrestling Championship.

All five Indian girls in action reached the final round but Sangeet Phogat (59kg) and Shivani Pawar (50kg) lost their bronze-medal bouts. Sangeeta suffered a minor right knee injury during the morning session and it did affect her performance in the bronze-medal bout.

Divya was outplayed by the defending champion, losing her final in the 68kg category on technical superiority (0-11). The Indian girl, who had lost to the same Kyrgyzstan rival at this year's senior Asian Championship, remained defensive, conceding point after point. She hardly attacked Meerim.

Divya had won her semifinal 6-0, a victory by fall, against China's Man Zhang and won the quarterfinal without stepping onto the mat as Mongolia's Purevtsetseg Ganbaatar did not turn up for the bout.

In the 59kg bronze medal bout, all eyes were on Sangeeta, the youngest sibling from the famous Phogat family, who was up against China's Juanjuan Shi.

She stepped onto the mat limping and was far from her best, though she fought bravely in her 5-10 defeat.

Indian shuttlers bow out of Singapore Open on forgettable day

The Indian badminton team, including its best bet Sourabh Verma, bowed out of the Singapore Open after a dismal outing.

The Indian women's national team lost 1-3 to Russia in the BRICS Under-17 football tournament in Johannesburg.

Coming on the back of a 0-5 loss against the hosts South Africa, the Indian eves took an early lead through Soumya Guguloth in the 6th minute but Russia came back strong and ran out eventual winners, scoring three goals in the remaining time.

Soumya had put India ahead when she slotted home from a cross, but the opponents equalised three minutes later.

Samiksha's effort in the 17th minute earned a decent save from the opposition goalkeeper but Russia doubled their lead in the 28th minute as the scoreline read 1-2. The opponents led at half-time.

Changing over, the Indian eves showed vigour in attacking but the momentum was cut short once again when Russia found the net in the 62nd minute to double their lead as the scoreline read 1-3.

In the 77th minute, Samiksha rattled the woodwork after her fierce free-kick left the opposition custodian bewildered. The Indian eves pressed to minimize their deficit but could only hit the woodwork in the dying embers of the match.

India next play Brazil on Saturday.