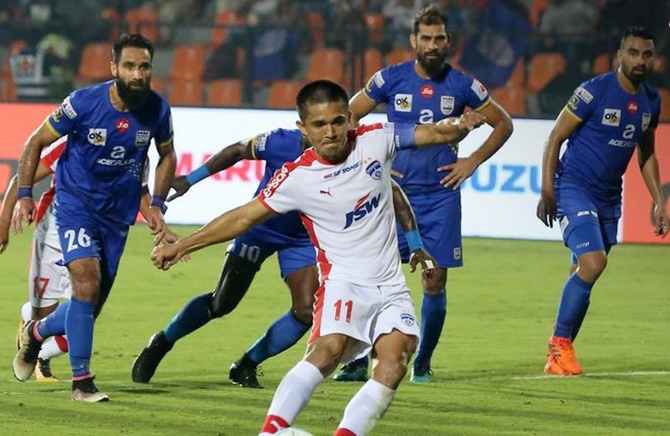 The India skipper was brought down late in the first half inside the rival penalty box by Balwant Singh and calmly converted the penalty kick awarded to his side in the 43rd minute.

The star striker then was in perfect position to chip in a superb centre sent by Udanta Singh, following a scorching run on the right flank, to make it 2-0 in the 52nd minute.

Venezuelan striker Miku made it 3-0 in the 63rd minute with a superbly placed free-kick from just outside the box that he hit into the left corner of the goal through a big gap in the defensive wall as Bengaluru rode rough shod over the hosts after an evenly matched first half.

Mumbai got a consolation goal after a run down the middle of the field in the 72nd minute through second half substitute Leo Costa off a pass from striker Balwant Singh.

The comprehensive victory, their seventh overall, after a shock loss to struggling Delhi Dynamos pitch-forked Bengaluru over Chennaiyin FC onto the top of the table with 21 points and dumped fifth-placed Mumbai to their second straight defeat at home and fifth overall from 11 outings. 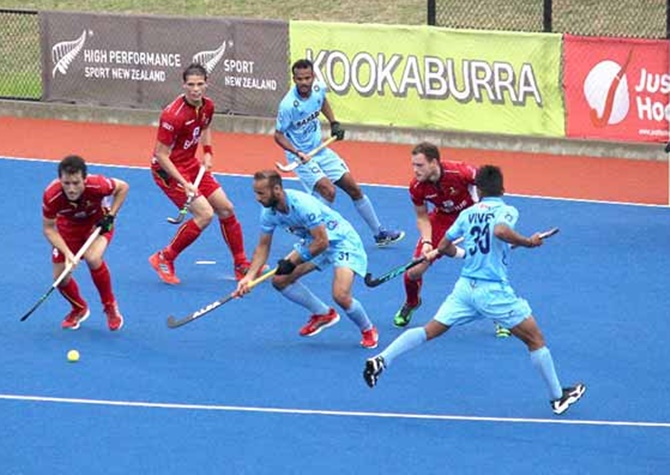 IMAGE: India pushed their limits in their attack but couldn’t find a breakthrough against Belgium. Photograph: Hockey India/Twitter

The Indian men's hockey team failed to convert any of the four penalty corners and ended up losing 0-2 to Belgium at the Four Nations Invitational tournament at the Blake Park, Tauranga, New Zealand, on Thursday.

The first big attempt came in the fourth minute when Belgian forward swiftly smashed a reverse hit to the post but goalkeeper PR Sreejesh, who is making a comeback from a long injury haul, made an impressive save.

The 1-0 lead in the eighth minute put India on the backfoot.

A compact Belgian defence slowed down India's attack in the second quarter. But relentless Indian forwards worked in packs as they kept up their hunt to find a successful penetration.

A strong circle penetration in the opening minute of the third quarter saw India win their third PC of the match, but Varun Kumar's drag flick was deflected by Belgian defender, denying India an equaliser.

Only minutes later, an error by the Indian defence was capitalised by Belgian Victor Wegnez who found the gap to put the ball into India's post to take his team's lead to a comfortable 2-0 in the 34th minute.

The final quarter saw India push their limits in their attack, created a few good chances, but couldn’t find a breakthrough.

India will take on New Zealand in their third match on Saturday.

Praneeth, Ponnappa-Sikki out of Malaysia Masters

Indian shuttlers B Sai Praneeth and the women's doubles pair of Ashwini Ponnappa and N Sikki Reddy bowed out of the Malaysia Masters badminton meet in Sibu.

In men's singles, Praneeth battled for each point but in the second game he was outplayed in every department of the game and lost the second round issue in the just 28 minutes.

Ponnappa and Sikki Reddy lost their women's doubles match in 35 minutes to crash out of the competition.

Acting on I-League club Minerva FC's report against a match-fixing attempt, the All India Football Federation stressed on its zero-tolerance policy on corruption, saying it would leave no stone unturned to "protect the integrity" of the sport.

AIFF's integrity officer Javed Siraj, who has been heading its anti-corruption unit since August 2014 as per the FIFA guidelines, felt the need of the hour is to "jointly combat any threats which can bring disrepute to the sport".

Referring to reports about Minerva Punjab Football Club footballers being approached by fixers, Siraj stated: "I need to applaud the two footballers who recognised, rejected and reported the incident.

"We await an official complaint from the club and will leave no stone unturned to protect the integrity of football."

An Indian and a foreign player of Minerva were offered bribes of up to Rs 30 lakh each in an alleged match-fixing attempt, the club's owner Ranjit Bajaj tweeted.

Bajaj said the club reported the issue to AIFF and also apprised the Asian Football Confederation.

Minerva FC are leading the I-League table this season, having accumulated 22 points from nine matches.

CAS to hear appeals from 39 banned Russians next week

The cases of 39 Russian athletes given lifetime Olympic bans following doping violations at the 2014 Sochi Games will be heard next week, the Court of Arbitration for Sport (CAS) said on Wednesday.

CAS said in a statement the hearings would begin on Monday in Geneva and run into the weekend, with verdicts being issued sometime the following week.

CAS said it received applications from 42 of the 43 Russians who were banned by the IOC Disciplinary Commission and that the cases involving three biathletes had been suspended and would not be heard next week.

Maxim Belugin, part of the two and four-man bobsleigh teams which finished fourth at Sochi 2014, is the only banned athlete not to have lodged an appeal.

Grigory Rodchenkov, Russia's former anti-doping chief who turned whistleblower, and Richard McLaren, the Canadian sports lawyer who sat on the independent commission that exposed doping and corruption in Russian athletics, are expected to testify by video or telephone.

The athletes were among 42 disqualified from events, banned from participating in future Olympics and in some cases stripped of their medals following the International Olympic Committee's investigation of widespread doping in Sochi exposed by an independent report for the World Anti-Doping Agency.

The IOC last month banned Russia from the Feb. 9-25 Pyeongchang Games as a result of its "unprecedented systematic manipulation" of the anti-doping system, though individual athletes will be able to compete effectively as neutrals if they can prove their anti-doping credentials.

The World Cup soccer tournament to be held in Russia in June and July will be an "attractive target" for Islamic State given Russia's role in the territorial defeat of the militant group, the U.K.-based analysis firm, IHS, said on Thursday.

"A successful attack (in Russia) would provide a tremendous propaganda boost for the Islamic State and its fighters and supporters, underlining the ongoing international threat posed by the group despite its territorial defeat," an IHS report said.

The participation of the national teams of Saudi Arabia and Iran in the tournament provided an even greater incentive for the group to target it, the report said.

Despite losing all territory in Iraq and Syria by November last year, the group claimed major attacks in Istanbul, London, Manchester, Barcelona and Tehran, killing dozens of civilians.

It targeted the Muslim holy city of Medina, in Saudi Arabia, in 2016.

Islamic State leader Abu Bakr al-Baghdadi is still on the run despite the collapse last year of the caliphate he declared in 2014 over parts of Syria and Iraq.

Attacks claimed by Islamic State rose slightly in 2017, to more than 4,500, despite its territorial losses, but fatalities from the attacks dropped by two-fifths compared with 2016 to about 6,500, the IHS said. 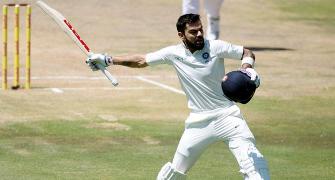 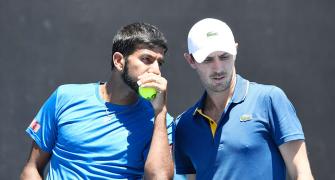 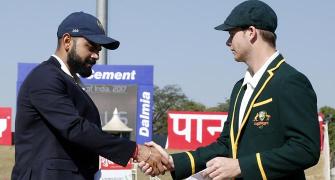 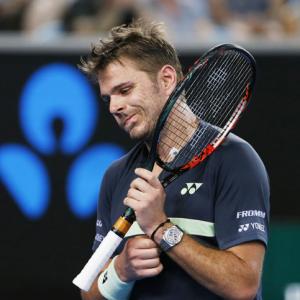 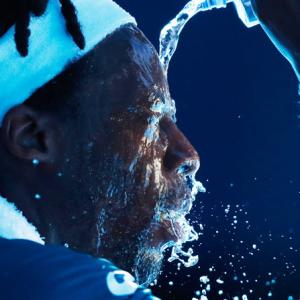