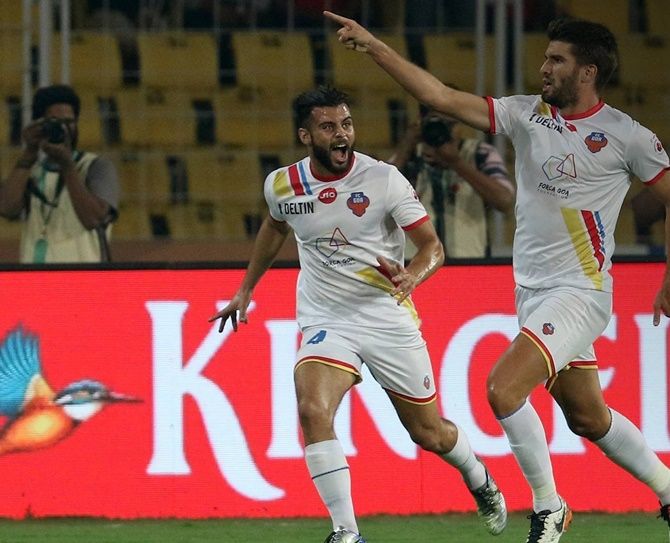 Manuel Lanzarote struck twice as FC Goa notched up a dominating 5-1 win over ATK and inched closer to a semi-final spot in the Hero Indian Super league (ISL) at the Nehru Stadium in Margao.

It was FC Goa's first ever win over ATK as the hosts dominated most part of the match with Sergio Juste Marin (10th), Lanzarote (15th and 21st), Ferran Corominas Telechea (64th) and substitute Markos Johannus (90th) sounding the board for them.

For ATK, Robbie Keane (87th) scored the solitary goal in the match.

Goa thus took their tally to 27 points from 17 matches, one point ahead of Jamshedpur FC, against whom they will play in their last league match on March 4.

A draw will take Goa to the semi-final as they will finish fourth with 28 points, while Jamshedpur who too are in the race for the knock out round need to win against the Goan side.

ATK, who remained on ninth place with 13 points from 17 matches, came back strongly in the last quarter to pull one back through Robert Keane in the 87th minute but it was too little too late.

Bengaluru FC, Pune City and Chennaiyin FC have already qualified for the semi-finals and the last spot is a fight between FC Goa, Kerala Blasters and Jamshedpur FC.

India placed alongside Belgium and Canada in Hockey WC 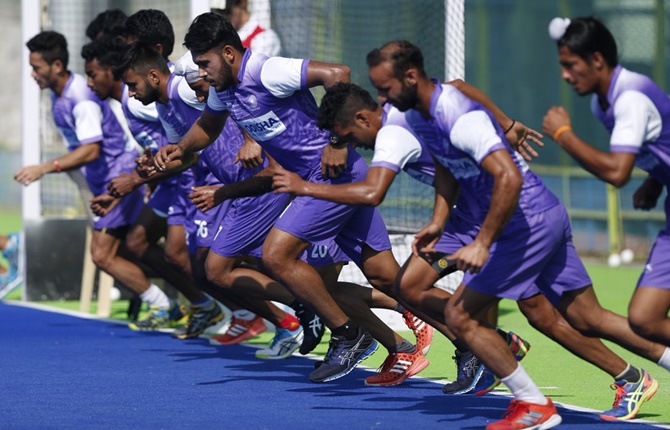 In a favourable draw, hosts India were clubbed in Pool C along side Olympics silver medallists Belgium, World No 11 Canada and African continental champions South Africa in the men's Hockey World Cup to be held in Bhubaneswar from November 28-December 16.

According to the schedule announced by the International Hockey Federation (FIH), Asian champions India will open their campaign against South Africa on November 28 before taking on European giants Belgium on December 2 and Canada on December 8.

There are a few marquee fixtures in the pool phase, including the mouth-watering Pool D meeting between two former world champions Germany and Pakistan on December 1.

England will be aiming to upset the mighty Australians on December 4.

The Pool stages will run from November 28 to December 9 and will be followed by the quarterfinals on December 12-13.

A first place finish in each pool will guarantee a berth in the quarterfinals, with the second and third place finishers in each pool needing to win a cross-over match, which will be played on 10-11 December, in order to reach the last eight.

The quarterfinals will take place on 12 -13 December. The semifinals will be played on 15 December, with the bronze medal and the showpiece final scheduled for 16 December.

World medallists Gaurav Bidhuri and Shiva Thapa were the notable omissions, while the likes of M C Mary Kom and Vikas Krishan were picked in India's boxing squad for the Commonwealth Games, selected for the first time without conventional trials.

Shiva and Manish have faced off twice so far, national championship final and India Open semifinal, with the latter winning on both occasions.

In the bantamweight (56kg) category, Bidhuri, out of action since his world championship bronze in August last year owing to a back injury but fit now, has been left out for Mohammed Hussamuddin, who won a bronze medal at the recent Strandja Memorial Tournament in Bulgaria.

Trials will only be held for male boxers in the 91kg and 52kg categories on March 1 and 4 respectively, while among the women, world silver-medallist Sarjubala Devi's name in the 51kg division will be sent based on her performance in a competition trip to Kazakhstan starting March 2.

The criteria for selection of the rest of the squad was a points system put in place before the men's National Championships last year in October.

The boxers were marked for their performances leading up to the Strandja Memorial earlier this month. But surprisingly, they were made aware of this selection process only in January.

In the men's 49kg category, Amit Panghal has got the selectors' nod based on his gold medal winning show at the India Open and the Strandja Memorial, while in the 75kg division, world bronze-medallist Vikas Krishan has pipped Mandeep Jangra.

Vikas has been selected on the basis of his twin feats of a gold medal and best boxer trophy at the Strandja Memorial despite being behind Mandeep in the points system. Vikas' points tally had suffered due to his injury-forced absence from the Nationals as well as the India Open.

The 69kg men's category has the veteran Manoj Kumar, a gold-medallist at the 2010 Commonwealth Games. He had clinched a bronze at the India Open.

In the +91kg category, Asian Games bronze-medallist Satish Kumar has been selected, while the 64kg and 81kg divisions have been dropped to keep up with the stipulated size of the contingent.

In the women's team, Mary Kom was expectedly picked in the 48kg category after claiming two gold and a silver in various events held in the last four months, while L Sarita Devi retained her place in the 60kg category.

Lovlina Borgohain (69kg) has been selected on the basis of her gold-winning performance in the India Open. The federation has stuck to its decision to drop the 57kg category despite protests by world and asian silver-medallist Sonia Lather.

The last date for the submission of the squad is March 5.

In a departure from the current formula for sharing the Davis Cup prize money, non-playing captain Mahesh Bhupathi and coach Zeeshan Ali were allowed by the AITA to claim a share from the players' prize purse from the Canada tie.

Till the World Group Play-off tie against Canada last September, the prize money was distributed only among only six players including the two reserves while the support staff was paid directly by the All India Tennis Association (AITA).

However, the prize purse for the Canada tie was distributed equally among six players along with the captain and the coach, which means the players' share was reduced.

Each of the eight people got a little more than Rs one lakh.

AITA secretary general Hironmoy Chatterjee confirmed the equal distribution and said it was done after Bhupathi put forth a proposal.

"The distribution was done after the captain discussed with the players and took this call. So it was the players' call," Chatterjee said.

It is a move which hits the singles players the most since as per the previous arrangement, their share was maximum from the prize purse. Therefore, there is a possibility that for future ties, the players may devise a new formula, which does not reduce their share drastically.

Asked for the reasons behind the new distribution model, Bhupathi said he actually wanted the prize money to be shared equally by 10 people, including the two physios since they keep the entire unit healthy, but AITA did not accept that proposal. The governing body only agreed to include the captain and the coach.

Bhupathi also insists that players will not get affected by it.

The AIFF wants to involve the second division sides in the Super Cup from next season, despite copping criticism from top I-League clubs for incorporating as many as 16 teams instead of the stated top four from each league, in the inaugural edition.

Soon after the All India Football Federation announced the inaugural Super Cup’s final round schedule, I-League clubs such as Mohun Bagan, East Bengal and Minerva Punjab FC lambasted the apex body over the tournament’s format and schedule.

Justifying the federation’s move, I-League CEO Sunando Dhar said, “There was no such fixed plan that only the top four teams from ISL and I-League would play. We always wanted that all the teams of both the leagues participate either directly into the main round or through qualifiers.”

The AIFF had earlier this month announced that the qualifiers of the Super Cup are scheduled to take place between March 12 to March 31 and the final round to be held from March 31 to April 22 in a one-match format and not round robin format.

“Because that’s the best thing about the Cup – on a given day the so called smaller teams winning over bigger teams, that’s the beauty of the Cup and we want to give a chance to every team.”

While Mohun Bagan and East Bengal ridiculed the Super Cup by terming the tournament "laughing stock", Minerva Punjab owner Ranjit Bajaj called it an event for “everybody” and not the top teams of the country.

At the time, the AIFF also said that a consensus on the number of foreigners would be arrived at after another round of discussion with the stakeholders.