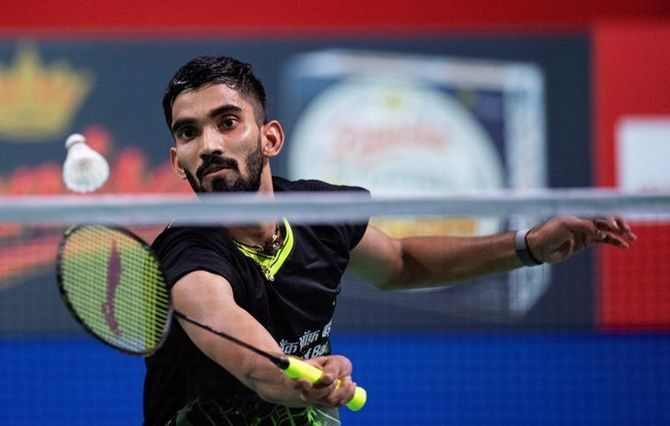 Former champion Kidambi Srikanth and Sourabh Verma advanced to the quarter-finals but young Lakshya Sen bowed out of the men's singles at the Syed Modi International Badminton tournament, in Lucknow, on Thursday.

The world No. 12 Indian will next meet seventh seed Son Wan Ho of Korea.

Sourabh, a winner at two Super 100 events in Hyderabad and Vietnam this year, defeated fellow-Indian Alap Mishra 21-11, 21-18 to set up a clash with Thailand's Kunlavut Vitidsarn, who accounted for World Championships bronze medallist B Sai Praneeth 21-11, 21-17 in another round two match.

In the women's singles, Shruti Mundada and Rituparna Das entered the quarter-finals with straight game wins.

The young women's pair of Simran Singhi and Ritika Thaker also progressed to the final eight after beating compatriots Riya Mookerjee and Anura Prabhudesai 21-12, 21-15 in 33 minutes.

Simran and Ritika, who won the Senior Inter-District State Open Championships in Latur and the All India Junior (Under-19) Ranking tournament in Tamil Nadu, will face Germany's Linda Efler and Isabel Herttrich next.

Kuhoo Garg and Anoushka Parikh beat the Indian pair of Sheshadri Sanyal and Lavanya Sharma 21-13, 21-6 to set up a meeting with Hong Kong's NG Wing Yung and Yeung Nga Ting.

Lakshya, 18, who is on a roll with title wins at the Belgian International, Dutch Open, SaarLorLux Open and Scottish Open last week, couldn't produce his best and went down 14-21, 17-21 to the experienced Son Wan Ho, a former world No 1.

In doubles, the women's pair of Ashwini Ponnappa and N Sikki Reddy conceded their second-round match against English pair of Chloe Birch and Lauren Smith after the former suffered an injury.

"Sad to withdraw from both my matches here at the Syed Modi Open due to an injury. When you don't listen to the signs your body gives you to rest and recover, it forces you to take a break by making sure you've got no option but to take the break. Time to heal my body!" Ashwini later tweeted.

Former champions Pranaav Jerry Chopra and N Sikki Reddy also were knocked out after they lost 12-21, 21-18, 13-21 to Germany's Marvin Seidel and Linda Efler.

Among other Indian pairs in the fray, Kapil Chaudhary and Akshay Kadam, Maneesha K and Rutaparna Panda, Dhruv Kapila and Meghana Jakkampudi -- all faltered in the second round to bow out of the competition. 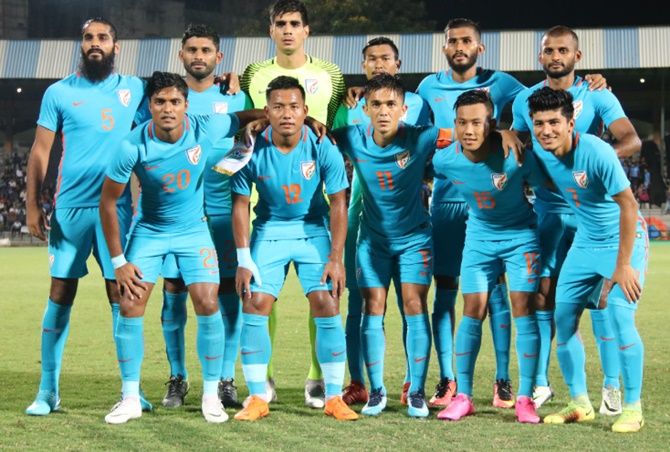 The Indian football team dropped two spots to 108 in the latest FIFA rankings announced on Thursday.

India suffered a 1-0 defeat against Oman in the FIFA World Cup Qatar Qualifiers on November 19.

The Blue Tigers hold the fourth spot, only above Bangladesh, in the Group E of the qualifiers as they have not won any of their five matches so far.

Belgium and France retained their first and second positions respectively in the latest rankings. Brazil are in third place followed by England.

Olympian Mairaj Ahmad Khan of Uttar Pradesh and Punjab's Gurjoat Singh shot down all the 100 targets over four rounds of qualifying to lead the men's skeet field in National Shooting Championship, in Delhi, on Thursday.

Mairaj and Gurjoat began the day by sharing the top spot with India international Smit Singh, who had also shot two perfect rounds on Wednesday.

However, Smit missed a couple on the day to be part of a chasing pack of four with 98 hits in the 110-strong field.

Rajveer was the most impressive, returning three perfect rounds on the bounce, including two on Thursday to also lead the men's junior field.

Ganemat Shekhon, part of the Indian team at the Doha Asian Championships, missed three on the day and with her two misses on Wednesday, was one ahead of Areeba Khan, who has missed six overall till now.

Darshna Rathore of Rajasthan was giving Areeba company on 94.